The Muslims are Coming, and Pamela Gellar Isn’t Happy (Surprised?) 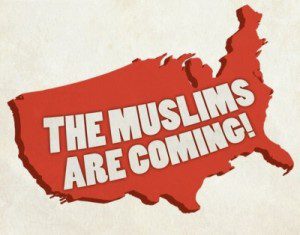 … In an effort to speed up the Muslim take over of America—which on some level would probably help my comedy career because I’ll get even more bookings by Muslim groups—my fellow Arab-American comedians Aron Kader and Maysoon Zayid went out to the streets of NYC with me to see if we could recruit Americans to Islam. (We did this a little while back when we first heard this allegation.) We offered prizes to people to convert to Islam, such as a toaster, a blender and even Sudoku. Here is a clip of our efforts to convert Americans! …

By 2011, this initial skit had become the Muslims Are Coming comedy tour which Dean Obeidallah wrote about in the article America, how can Muslim-Americans reach non-Muslims?.  You can see Dean Obeidallah’s Tedx talk about the comedy tour here

And during the comedy tour, Dean Obeidallah and Negin Farsad began working on making a documentary film based on the comedy tour.  In 2011, Obeidallah requested an interview with Robert Spencer to be included in this The Muslims Are Coming documentary film, and Spencer turned this into a “prove to me you’re not a radical Muslim test.”  I laid out the whole saga in the article The Muslim comedian and the Islamophobe:  A funny thing happened on the way to the interview.  That article includes Spencer’s 1,000 word plus questionnaire requiring an answer before he would consider being interviewed by Obeidallah, and my answers to those questions.  The bottom line is that Spencer didn’t agree to the interview.

Obeidallah and Farsad created a Facebook page and ran a Kickstarter donation compaign to get the funds to complete the film project.

Now, in 2013, the film is complete, and is set to be released in theaters on September 12th.  This documentary film is co-directed by Farsad and Obeidallah.  You can see the trailer below.

Patrick Gavin published an article about this film titled Film tackles Islamophobia with humor.  He noted that “The film tracks a group of Muslim-American stand-ups as they performed in the Muslims are Coming Comedy Tour across the country and tackle people’s stereotypes.  The film also features cameos by Jon Stewart, David Cross, Janeane Garofalo, Colin Quinn, Lewis Black and Aasif Mandvi.”

Pamela Geller doesn’t find this funny.  She has just written Cultural Jihad: Hollywood Documentary to Mock ‘Islamophobes’.  Here are just a few of her objections to this Muslim comedy:

“… We aren’t even allowed to discuss Islam and the doctrine of jihad in the mainstream media, but ‘Islamophobia’ is a matter for comedy?  …  So the new cultural jihad is to make it cool and happening and now to make fun of the people who do talk about it at risk of their reputations and livelihoods and personal safety.  …  The Hollywood hordes who have signed on for this film have no intellectual depth, but fighting against ‘Islamophobia’ is perceived to be politically correct and chi chi, and that’s all they need.  …  Meanwhile, anti-jihad activists can’t get movies made. … “

Yes, Geller is right this is a jihad, in the sense that mainstream, traditional Muslims understand jihad — not in the sense that Islamophobes and the Muslim lunatic fringe distort the term.  It is a comedy jihad.  A jihad for truth, justice, and the American way.

I for one am going to buy a ticket and have a good laugh at the idiocy of Islamophobes like Geller and Spencer and the rest of the Islamophobia echo chamber. Click here to learn more about this film and if it is screening near you.

Sheila Musaji is the editor and founder of The American Muslim, where this article was originally published. 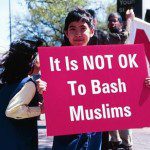 September 11, 2013 Twelve Years Later, The Ramifications of 9/11 Run Deep for Muslims
Recent Comments
0 | Leave a Comment
"FsyYOU are hate. Period."
Soren A Ramadan Testimonial of Repentance and ..."
"Thank you for sharing this article along with detail information, and you have mention the ..."
wazeer shaik The Path Through Hajj – One ..."
"Tamerlane is considered an oppressor amongst Islamic scholars and an anti-hero in Islamic culture. It's ..."
Ali Inspiration: Star Wars: An Islamic perspective
"did you head to syria? did you take ilisha?"
mike malzahn Quran, Hadiths or Both? Where Quranists ..."
Browse Our Archives
get the latest from
Muslim
Sign up for our newsletter
POPULAR AT PATHEOS Muslim
1