There is no one in creation more worthy an example of this Quranic verse, “Indeed Allah loves those who are Muhsins – those who do beautiful things (2:195),” than Prophet Muhammad (pbuh). A Muhsin is one who is in a state of Ihsan and Ihsan is the highest spiritual state possible. It is the farthest station from this world in the journey towards God.

God is everywhere. It is meaningless to talk of God as if He is in a place in a spatial sense. There is no spatial distance between God and His creation. He is with you wherever you are (57:4). The distance that exists is only spiritual. The closest to God is one who is so supreme in her submission to Allah that she loses herself and becomes annihilated in Him (Fana’a fi Allah).  She ceases to be and revels only in her union with the ultimate being.

This state, where the believer and the beloved, the servant and the master, the worshipper and the worshipped, the creator and the creation becomes one is Ihsan. The furthest is the unfortunate soul, who turns away.

Syedna Muhammad (pbuh) has travelled the furthest on this spiritual path. He reached stations such as Sidrah al-Muntaha (53:14), which even archangel Gabriel cannot aspire to.  This station is the ultimate level of Ihsan, the extremity of creation where creation, sensibility, cognizance and knowledge ends and the purely uncreated begins. While this maybe a spatial location for the nadir of Ihsan, the one who ascends it is the Muhsin of Muhsins – Syedna Muhammad, upon who even Allah and his angels sends peace and blessings (33:56).

A Muhsin is one who aspires to perfection and beauty in everything. The Arabic root of Muhsin, h-s-n, means many things, including beauty, perfection, to be better and to be the best. Prophet Muhammad is the best of them because he sought to achieve perfection in his faith and in his submission to the will of God. But above all else, we know that God loves him and indeed God also loves those who obey him (3:31). Above all else Prophet Muhammad manifests some of God’s own attributes such as mercy and kindness (9:128).

According to Islamic traditions, before God created the creation, he made a promise to Himself, “May my mercy prevail over my wrath” (From Sahih Bukhari). The idea that the tradition suggests is that Allah will be merciful in dealing with and his judgment of his creation. Mystical thinkers think of the creation itself as a manifestation and unfolding of Allah’s mercy. But I sometimes feel that God fulfilled his promise to be merciful to his creation by sending us Prophet Muhammad (pbuh). In the Quran he is heralded as “nothing but Allah’s mercy to all the worlds. (21:107)”  His being connects all of us — humanity, other living beings and the environment — to God’s mercy.

This year, January 14th  is the day Syedna Muhammad was born 1444 years ago. And for more than 1400 years Muslims have been celebrating his life and his mission by sending prayers and blessings for him, in every prayer and after every prayer and every time his name is mentioned.  The Quran testifies that God and his angels have been sending prayers and blessings upon him and God commands those who believe to do the same.

Some Muslims, unfortunately will miss this joyous moment. They will sulk, maybe even curse those who will celebrate our dear Prophet’s momentous entry into this world. A birth that would have tipped the balance of grace between the heavens and the earth, in favor of the earth, when Syedna Muhammad came from the heavens to the Earth.

But the rest of us, along with God and his angels, his prophets and his saints and his servants and his stars and his planets will pray and sing and our hearts will dance with joy as we mark the day, that the Mercy of Allah, his grace, his beloved, his friend, came to us. If there was a day of celebration for the entire universe, that would be this day — Mawlid al-Nabi Sallallahu Alaihi wasallam.

O Muhammad, O Muhammad
You were a Prophet before Adam
You were the light before the dawn
Love and blessings upon you, O Muhammad,

O Muhammad You went beyond The Beyond
You saw His greatest of Signs
Your name is on his throne,
O Muhammad Every atom, every soul, sends blessings upon you

He is the most Merciful, The Most Compassionate
He is All Knowing and All Forgiving
And he sent you, O Muhammad, as mercy to all
All of us, sinners and Walis, send blessings upon you

Click here to watch a video of Dr. Khan explaining why the Mawlid should be celebrated.

Dr. Muqtedar Khan is Associate Professor at the University of Delaware and a Fellow of the Institute for Social Policy and Understanding. His website is www.ijtihad.org. 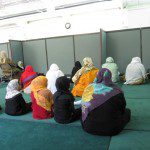 January 17, 2014 Women Struggle to be Heard in the Mosque
Recent Comments
0 | Leave a Comment
Browse Our Archives
Follow Us!