Women Struggle to be Heard in the Mosque 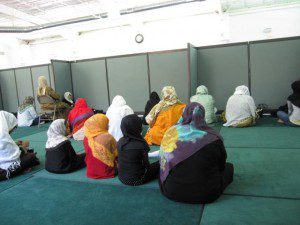 Two Muslim women enter a mosque (no, this isn’t the opener of a lame joke). Both sisters join the prayer, enjoying the Imam’s melodious recitation over the loud speaker — the only communication they have with the walled off men’s prayer area where the Iman stands, leading the prayer. They kneel down and touch their foreheads to the ground. Some time passes and one sister begins to wonder why the prostration, typically no more than 10 to 30 seconds, is now in its second minute. She had enjoyed the extra time to fit in some much needed supplication, but two minutes?

Finally the Imam calls out “Allah is Great,” the sign for the congregation to rise out of prostration. The sister raises her head and, to her surprise, finds that her friend on the right is standing in prayer while the woman to her left is still sitting! A confused panic breaks out, as sisters on all sides begin to make hurried movements, trying to catch up to where they think the Imam is in his prayer. After another two excruciating minutes of silence interrupted only by static, “May the peace and mercy of Allah be upon you” booms out of the loud speaker, signaling the end of prayer.

Every sister rises, finishing off the remainder of yet another haphazard attempt at prayer in the mosque, all the while skeptical of the validity of the prayer itself.

Behind that opaque, impenetrable barrier that separates the believing men from believing women, nobody makes mention of the not-so-uncommon “technical difficulty.” There’s no one to complain to anyhow; neither the Imam nor the mosque administrators can see the women behind the forbidding wall.

Such is the state of the majority of mosques in the U.S. and across the world today. Sadly this is a step above the countries which have yet to even designate a section in the mosque for women.

The barrier comes in all shapes and sizes ranging from a completely separate room to a curtain or a flimsy screen. Whatever the shape, the objective is always the same – keep the women and men out of sight of one another. Certainly it’s what our dear Prophet (peace be upon him) would have wanted, right?

It’s a widely accepted practice, no doubt, but ironically not at all in keeping with the example set by Prophet Muhammad. If you had walked into the Prophet’s mosque in Medina some 1400 years ago, you would find no physical barrier separating the men from the women. Many hadith give proof to this open arrangement, including one in which a companion of the Prophet, while in the Prophet’s presence, advised women to wait a few moments before raising their heads from prostration so the men praying in front of them would have a moment to stand and the ladies would not catch a glimpse of the men’s private parts–some men did not have the means to purchase long garments which fully covered them when they bent down in prostration (Sahih Muslim, Vol. 441, Book 4, Hadith 149). Clearly, this indicates that there was no barrier, for the men were in clear sight of the women. Certainly the Prophet could have erected a curtain or a short mud wall to spare his congregation from this embarrassing scenario, but he never did.

Another hadith tells us that the Prophet Muhammad would wait a while after the prayer finished, giving the women time to leave the mosque first without causing a traffic jam at the exit door where men and women would be standing close to and jostling against one another (Sahih Bukhari, Vol. 1, Book 12, Hadith #809). This is yet another indication that both genders entered, prayed in and left the very same room of the mosque.

And finally, nearly every Muslim is familiar with the story of the woman who spoke up and contested the Prophet’s companion and second caliph, Umar, when he was lecturing at the mosque on the rules of dowry. Did she have a microphone that allowed her to pose the question? Of course not, she spoke from where she sat in the mosque — behind the gathering of men, with no barrier in between her and them, and close enough to be heard and answered.

I know what you’re thinking. These men and women were the Companions of the Prophet who embodied a standard of faith and ethics we cannot dream of reaching. We are nothing like them and cannot expect to be treated like them. True, they were among the best of men and women, but does this mean they were free from temptation? The answer is a resounding no. In fact, one companion confessed to kissing a woman who was neither his wife nor a relative (Sahih Bukhari, Vol. 1, Book 10, Hadith #504). More than one confessed to adultery or fornication (Sahih Bukhari, Vol. 7, Book 63, Hadith #196).

These men and women were human begins; their characters came in all shades, just as those of today’s Muslims, yet the Prophet did not resort to erecting a wall to enforce modest etiquette. If we are to believe that there is wisdom in his every example, then why stray from it in this situation?

But today a barrier is needed, some would still argue. Our men don’t lower their gaze and our women don’t dress appropriately! To this I ask, how can we check our transgressions and strengthen our morals in a mosque segregated by a barrier? After all, an Imam must see a man’s wandering eyes or a man or woman’s immodest dress in order to correct him or her.

Some men argue that the women’s prayer space should be set apart from that of the men because the ladies section is noisy and chaotic. I agree. You will find women chatting on cell phones and children racing around from one end of the room to the other. Yet perhaps this unruly atmosphere comes from the lack of an Imam’s presence? An Imam whose face the listener can see creates a sense of attentiveness and accountability.

Of course the effect of the barrier between the men and the women does not stop at prayers alone. It also stands in the way of a Muslim woman fully engaging in her community. Unable to chime in during the post prayer discussion, unable to raise her hand to volunteer for a committee and unable stand up and donate during a fundraiser, a women is left in the back and in the dark. We disable ourselves when we hide half of the congregation and pretend that they do not exist.

I would argue that the root of the problem is not the barrier itself, because we cannot deny that some women enjoy the privacy it affords, allowing them to unabashedly rest or even nurse, but rather the lack of choice on the matter. We were never asked whether or not we would like a separation between us and the Imam. Men assumed this setup was our preference. Well, how could they asked us? There’s a barrier.

So where do we go from here? A few forward thinking mosques have come up with multipurpose partitions accommodating all women in their congregation. The Nueces mosque in Austin, Texas, hung a mobile curtain that women can draw when and how they prefer. The ISNA mosque in Mississauga, Canada, set up a waist high partition that allows the women to see the Imam and be heard when speaking up. Others still have chosen to erect a barrier concealing only half of the women’s section; those who prefer complete separation can stand behind it, and those who do not, can stand in the open area.

At the end of the day, the answer doesn’t lie in either-or, but rather in our communities encouraging frank discussions about the barrier itself —discussions in which women are given a chance to voice their feelings about the wall that they will face every day.

Formerly a writer for the Houston Chronicle – Texas’s largest daily paper – Safiya Ravat now works as a freelance journalist, who is currently enjoying the adventure of pursuing Islamic Studies at the International Islamic University of Malaysia with her husband. You can find other articles by Safiya Ravat here. This article originally appeared in Altmuslimah, which is not affiliated with Altmuslim. 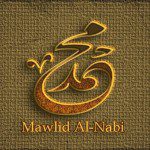 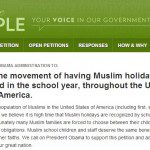 January 29, 2014 The Problem with Petitions - for Muslim School Holidays and Otherwise
Recent Comments
0 | Leave a Comment
"Thanks for sharing informative blog with us regarding the halal meat revolution."
Boxed Halal Sustainability: The eco-halal revolution
"Salam. I am going to be blunt and honest with you. Girls who are doctors, ..."
Rubina Ahmed Looking for Love and Finding Awkwardness ..."
"FsyYOU are hate. Period."
Soren A Ramadan Testimonial of Repentance and ..."
"Thank you for sharing this article along with detail information, and you have mention the ..."
wazeer shaik The Path Through Hajj – One ..."
Browse Our Archives
Related posts from altmuslim