Dear Non-Black Muslims: Your Silence is Not Peaceful

He who passively accepts evil is as much involved in it as he who helps to perpetrate it. He who accepts evil without protesting against it is really cooperating with it. –Dr. Martin Luther King, Jr.

King made the above statement in his first book, Stride toward Freedom, and would go on to express this idea multiple times until the end of his career.  King chastised the white liberals of his time for their unwillingness to act in the fight for Black civil rights. He correctly saw them as assisting in the commission of evil.

Yet, it would seem many of the American Muslim community’s laypeople and leadership would not only accept this evil but even argue that it doesn’t exist for the sake of being “peaceful.” The most recent and notable example was when Sheikh Hamza Yusuf at the 2016 RIS (Reviving the Islamic Spirit) Convention supported his views of not allying or supporting current Black liberation movements within the U.S. because “we are a people who call to peace.”

I wonder when in history that inaction, in the face of oppression, has ever led to peace.

Peace will certainly not come from calling Black Lives Matter and other pro-Black organizations “warmongers” or people who want to start a “race war” when they have not, in policy or leadership, promoted violence. And it will not come from completely disengaging from the issues of disproportionate Black mass incarceration and police brutality because you do not like the movement at the forefront of these discussions.

Interestingly, King, who was explicitly nonviolent, was also discussed with similar disparaging language, with his movement being described as combative and warnings that the famous March on Washington would lead to war. The argument that people who stand against oppression are somehow anarchists or warmongers is the same argument that fueled investigations of King and Malcolm X, and the infiltration and disruption of theirs and other pro-Black and civil rights organizations through operations like COINTELPRO.

Peace will not come from denying the lived and historical experience of a people so that you can make their problems seem less bad. To assert, for example, as Sh. Yusuf did that the United States is one of the “least racist societies in the world” due to its anti-discriminatory laws is to present a view that ignores the history that has made those laws necessary, and how that history — in its material and psychological remnants — defines the lives of Black people today.

Such a re-envisioning blurs the realities of longstanding U.S. racial politics for the sake of more pleasing post-racial illusions — the kind that create the complacency among the passive while active racists aggressively attack important protections like the Voting Rights Act.

No peace will come if you accept my people’s oppression and tell yourself that this acceptance is a spiritual act. I resent the idea that anyone would feel they have risen to a state of seeing the world through a “metaphysical lens” or some other more enlightened way because they decide to do nothing against my people’s oppression. I resent it if you can call yourself content because you accept the trials and tribulations of another people — trials and tribulations you are privileged to not have.

I resent the notion that I, and others like me, are somehow not as enlightened if we fight back against such forces. Your spiritual lens is a critical lens that censures my people for demanding basic human dignity. It is a lens through which we have never been viewed as fully human but rather characters in parables whose only purpose is to teach you a moral lesson. Moreover, it is a lens you use when you look at the violence against my people and want to magnify the ways in which we deserved that violence, which brings me to my next point.

For the sake of your conscience, you pathologize us. In Sh. Yusuf’s initial statements and clarification at RIS about his unwillingness to get involved with police brutality against Black people, he found it necessary to discuss “black-on-black crime” and the “breakdown of the Black family.” He discussed the loss of the Black church’s influence as if Blacks are more spiritually or morally deficient than others.

Racism was pushed away to focus on these more important crises. Never mind that the issues of Black crime and broken families have been created and exacerbated by specific racist policies and systems, and never mind that those same ills are exaggerated by forces that benefit from squeezing all of Black American existence into these racist stereotypes. And never mind that those stereotypes are used as justifications by public school and criminal justice systems to disproportionately and violently punish Black people. Your silence permits the racism that leads to violence.

Real peace will not come from shutting up about the oppression. It will not come from trying to shut up the oppressed who speak about their condition. And it will never come from refusing to work with the people fighting against that oppression. Islam does not say that the most religious people are the ones who sit on the sidelines and do and say nothing. Our faith and history teach that passivity is not the way to peace.

Jamilah Thompkins-Bigelow has written for Altmuslim at Patheos,  AltMuslimah and Islamic Horizons Magazine. She is awaiting the 2018 release of her debut children’s book, Mommy’s Khimar,  with Simon & Schuster Salaam Reads. She works as an English teacher and serves as a fellow with MuslimARC – The Muslim Anti-Racism Collaborative. 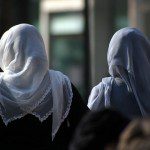 December 23, 2016
Imagined Q&A on Hemlines and Hijabs
Next Post 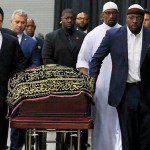 December 30, 2016 12 Issues and Stories that Captured the American Muslim Communities in 2016
Recent Comments
0 | Leave a Comment
Browse Our Archives
Follow Us!