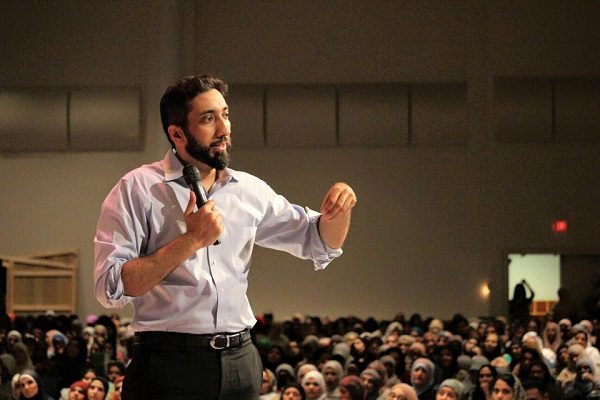 As if the epidemic of secret marriages in Western Muslim communities wasn’t enough, this past week, the North American Muslim community has been reeling from the impact of the Nouman Ali Khan story. This, following when Elgin, Ill. Imam Abdullah Saleem’s molestation of students and employees came to light, has Muslim Americans wondering if some male religious leaders didn’t always have women’s best interests at heart.

The scale of an existing problem was only aggravated by the ease and relative secrecy with which new technologies allow for sexual and sexualized relationships.

Then, Mona Haydar’s song He’s a Dog came out in the summer of 2017, pointing a finger at men who presented a pious face to the public but pursued women in private:

Shaykhs on the DL, Shaykhs in my DM
Begging me to shake it on my cam in the PM

In late September, the rumblings of the rumor mill about Nouman Ali Khan – yes, the rumor was around well before September – broke in an out-and-out storm about how he was allegedly pursuing multiple women and then harassing and intimidating some, as well as buying at least one woman’s silence.

Shaykhsploitation (you heard it here, folks) has come to be regarded as a concern serious enough to warrant professional-level care and collective discussion.

The truth is, this is not a new phenomenon. In the past, we’ve known others too, such as a certain married celebrity-shaikh who was carrying on with another woman using religious mumbo-jumbo to facilitate his carnal pursuits (despite public knowledge of his utterly weird shenanigans against his ex-wife and mistress, he’s still active on the lecture circuit). Nor is this a phenomenon unknown to other faith communities or to secular society either. The scandals of televangelists Jimmy Swaggart and Ted Haggard live on in our memory.

But, you know the elephant in the room must be named.

Men’s domination of religious leadership is bad for them.

At least on some level, there has been a public Muslim American discussion on the need to foster women religious leaders, to give them space, to ensure women are represented in religious spaces and discourses. Usually, however, this gender inclusivity comes across as charity, as if the only people who benefit from gender inclusivity are these women leaders and educators — except when it’s meant as legal or public relations CYA (“let’s put one woman on the panel so no one can complain”).

In the 1990s, when I arrived in the United States, I found myself at a Chicago dinner table where the family’s visiting relatives were declaiming upon the corruption of American Muslims, evidenced by the horrors of — women speakers in the Muslim lecture circuit.

For quite a while, women speakers were relatively unknown and unseen in the mainstream lecture circuit. I remember being a new “find” on the MSA circuit (until, of course, I quit wearing a head-cover and started criticizing patriarchal practices in local MSAs).

Today, there are still many, many Islamic events where women are absent from speaker panels, but at least we have the “the unlikely face” of David Hasselhoff to mark the triumphs of Islamic female-free man-parties. 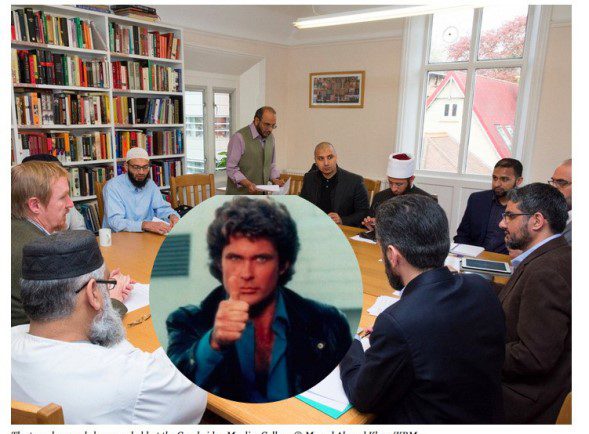 The case of Nouman Ali Khan and those many unnamed shaykhsploitative male religious leaders, preachers and speakers (still hiding in the woodwork, but not for long, I suspect) demonstrates an urgent need.

There is an urgent need for Muslim women religious leaders, speakers, preachers, mentors and organizational decision makers. When vulnerable young women can reach out to fellow women as shaykhas, mentors and leaders, they can be better protected from the wiles and the sexts of the latest buff young hafiz on the lecture circuit, who has only one part of the Surah Yusuf story on his mind. As my friend Dr. Ingrid Mattson reminds us:

With knowledgeable and experienced women mentors, young women can be safer from a life of guilt, secrecy and lost faith.

Don’t say we didn’t tell you. By monopolizing the podium and the minbar, conservative Muslim preachers are only facilitating the downfall of their empire.

At this time, there are many who are scrambling to gather the pieces of the patriarchal Islamic leadership, arguing that he didn’t do anything so very bad, or that we don’t know the true story. This is a house disintegrating before our eyes.

There are also many who claim that the NAK scandal is in fact a demonstration of how badly we need sexual segregation. But, what we find is that most of the cases of Shaykhsploitation coming to light are from the more conservative Islamic organizations. Nouman Ali Khan scolds young women for being “giggly” around non-mahram men, and claims, “When a woman uses a serious tone, the man becomes serious automatically.” I guess this means women are to blame for his downfall, since they must have been giggling just before he sent those “my hot fantasy” texts.

It does not appear that male laughter has any effect on women, though. So, the fragile male Noumans of the world cannot be trusted around young women who laugh. Nor can these men be trusted with the financial resources of their faith empires. Maybe, then, they should give way to mature women leaders and include more and more of them in their events and their activities.

Maybe our communities should also see the light and stop tripping over their own feet to invite male celebrity shaykhs to their masajid.

Shabana Mir is Associate Professor of Anthropology at American Islamic College. She is an anthropologist who specializes in gender, youth, and religion, and is the author of Muslim American Women on Campus: Undergraduate Social Life and Identity. 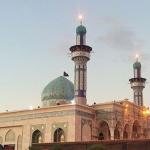 September 28, 2017
The Pain in Our Joy - On Blackness, Ashura, and Remembering
Next Post 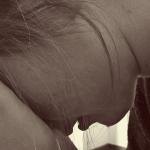 October 4, 2017 How Do You Recognize a Spiritual Abuser?
Recent Comments
0 | Leave a Comment
"Thanks for sharing informative blog with us regarding the halal meat revolution."
Boxed Halal Sustainability: The eco-halal revolution
"Salam. I am going to be blunt and honest with you. Girls who are doctors, ..."
Rubina Ahmed Looking for Love and Finding Awkwardness ..."
"FsyYOU are hate. Period."
Soren A Ramadan Testimonial of Repentance and ..."
"Thank you for sharing this article along with detail information, and you have mention the ..."
wazeer shaik The Path Through Hajj – One ..."
Browse Our Archives
Related posts from altmuslim