Simple service, and a Retreat

Patheos Explore the world's faith through different perspectives on religion and spirituality! Patheos has the views of the prevalent religions and spiritualities of the world.
Before leading a meditation for our University’s Health Enhancement Services group (which means teaching freshmen in dorms, giving them their first taste of meditation), I was given this lovely card: 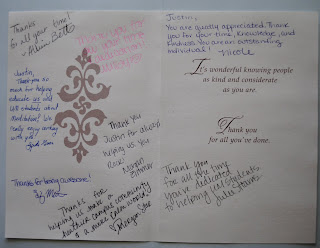 I have worked with them, I guess, for over a year now, leading dorm meditations as well as some that were specially aimed at athletes (18-20 year old young men and women, together, with an ‘athletic’ energy that made things tough). I’ve also offered “wellness week” meditations during the week before finals, but students have generally been too stressed out to sit and meditate! So they grab the free ‘stuff’ that is also given away that week and rarely pop up to my secluded little meditation room.

The great news is that the few who do make it are universally appreciative. So even if I have to sit alone during some periods, the times when people do show up make up for it many times over.

Now it’s off to a retreat near Jackson, WY, in the beautiful Grand Teton National Park. The camera is coming along, though it will stay in the bag until we depart for a couple nights of camping. If we’re lucky, we’ll pull up to this exact spot and get a shot half as beautiful as this:

Best wishes for a beautiful week for all.

April 13, 2010
Dhammapada and the forest: Buddhism and the Environment
Next Post