This week Nate from Precious Metal and Kyle of the Reformed Buddhist announced the revival of the Blogisattva Awards. Tom Armstrong, of many blogs over the years, first conceived of the awards and has given his blessing and assistance in this new incarnation of the awards. *Full disclosure: I received 2 Blogisattvas in 2008 and one in 2006. I was also a judge in ’08 and if I remember correctly, we (judges) simply did not cast votes/points for our own blogs to remove any possibility of ego-bias. See a full chart of past winners and nominees here.

The announcement has brought out a range of responses from fellow bloggers; mostly concerns about the effects of an award in the selfless world of Buddho-bloggers. Perhaps the most telling was Scott’s from the buddha is my dj, with the headline “i’m number one?” and caption, “What if the Blogisattvas turn us all into this?”* 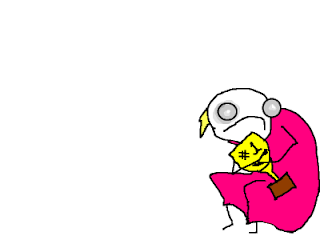 I am rather ambivalent about these kinds of things as I somewhat snarked back in 2008 in the post The Buddhist Contest. The lip is still slightly curled at the resurgence but am setting that aside for the most part and considering who to nominate…

These kinds of popularity contests don’t often have much by way of criteria other than being “friends” with someone or a lot of blog stats for whatever reason. The content, care and time taken to do the work is pretty irrelevant. (Yes I am feeling a bit cynical today) This is exactly why I want to at least give my nomination process that kind of consideration.

She goes on to raise some good questions that surely will be considered by Nate and Kyle and others involved in the process.

Nate, for his part, posted this on Thursday:

As the founder of the Blogisattvas [Tom] himself said, they are intended to shed light on bloggers who’s ability to write insightful articles impact the buddho-blogosphere.

PROs:
CONs: (potential)
Given all of this, I’m very happy to see the awards resurrected. And I’m confident that with the PROs in mind, the CONs won’t be a significant problem. If you know of other potential CONs, I, and I’m sure the admins, would love to hear about them – speak now or forever… For my part, I am grateful to Tom, Nate, and Kyle (and others involved) for their efforts and look forward to this year’s Blogisattvas.
* image via http://hyperboleandahalf.blogspot.com/

June 24, 2010 The Three Marks of Existence in Life
Recent Comments
0 | Leave a Comment
"I've read that borderline persons have a high sense of fairness and BPD is soooo ..."
steven solomon Borderline Personality Disorder and Buddhism (IV)
"I came across this site by accident, It reminded me of a story about two ..."
quacknduck Tourists: Buddha Tattoos are Taboo; as ..."
"eMudhra Limited is a certified body, licensed by the Government of India. eMudhra operates in ..."
Mycaportal Buddhism: Dzogchen and Mahamudra
"folks hav to learn the local laws wen they invade the space"
Joe Biggs Tourists: Buddha Tattoos are Taboo; as ..."
Browse Our Archives
get the latest updates from
American Buddhist Perspectives
and the Patheos
Buddhist
Channel
POPULAR AT PATHEOS Buddhist
1