Imagining the Buddha – as bald… and black? 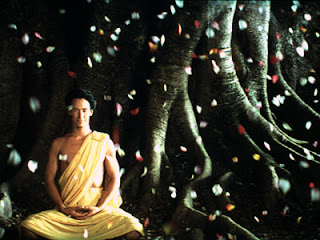 Close your eyes. Imagine Buddha seated in front of you. Spend a moment scanning the scene. What features does your Buddha have?

This is an interesting practice not only because it is a very common traditional practice of Buddhism, the recollection or visualization of the Buddha, but also for what it tells us about our conditioning, cultural or otherwise.

Odds are, you’re not visualizing Keanu Reeves, from his role as the Buddha in “Little Buddha

.” But perhaps something close? With the tree, yellow robe, and black, curled hair (flower petals optional). 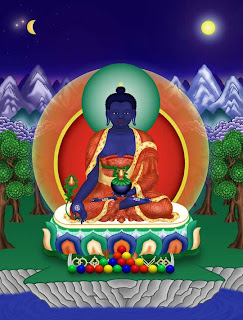 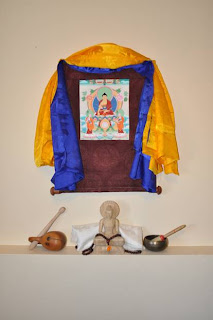 My own little office shrine, with an Indian-carved wooden Buddha in meditation posture and a Tibetan thanka with Buddha in earth-touching posture. 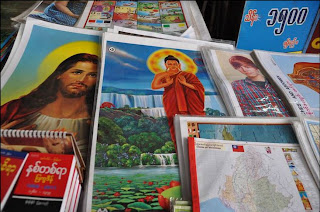 Or another computer-generated or enhanced, but slightly more traditional version… The above is from my time in Yangon (Rangoon), Myanmar (Burma). I call it my “Jesus-Buddha-Bieber” photo. Other possibilities abound. 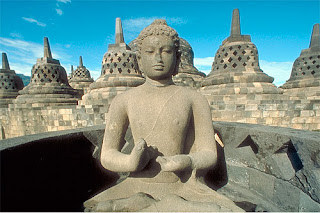 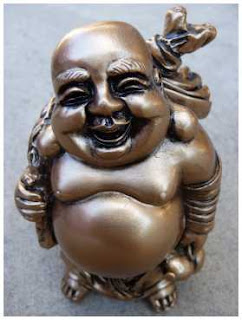 And the ever-cute but not correct “Buddha” from Chinese folk mythology, better known as Hotei or Butai. This guy didn’t become a or the Buddha as far as I know until some unknowing Westerners started seeing him in Chinese food restaurants (I worked in one such restaurant in high school, and still remember the “Buddha fountain” in the entrance). 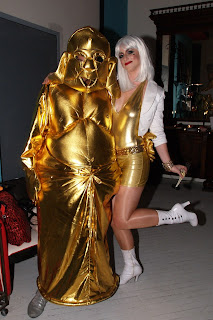 And then there’s the also incorrect and surely-offensive-to-someone golden Hotei costume… I’m reminded of a post from a bit over a year ago by John over at Zendirtzendust, where he posted a picture of Gollum (From Lord of the Rings

) and suggested that the famous “32 Marks” of the Buddha would have left him looking a bit gollumish if he in fact had them. The title, “Buddha, Sex Symbol for the Ages” was a bit irreverent (as was the post) and the discussion quickly went to the appropriateness (or lack thereof) of certain levels or kinds of humor. Nathan, over at Dangerous Harvests, picks up on that whole conversation.

Obviously from all of that, how we imagine the Buddha, given the plethora of scriptural descriptions, paintings, and statues, matters. So it was with some interest today when I came across a very intriguing article simply called, “The Buddha was Bald.” The author, Eisel Mazard, cites numerous instances in the Pali Canon supporting the idea that the Buddha was bald and/or undifferentiated from his male companions (who are always depicted as bald).

Mazard makes some headway into exploring how and why later sūtras (mainly from the Mahāyāna) and statues, which began in Gandhara, depict the Buddha with hair. And while I don’t agree with all of his conclusions -see the comments in the article- I appreciate the piece for opening new and perhaps more historically correct windows into our imaginations about the historical Buddha. Some suttas even depict the Buddha as being “black” – a culturally loaded term, then as now – usually referring to someone of lower caste and/or with heritage coming from southern India where people were, and are, mostly much darker in skin tone than in the north.

We might then even wonder if we should imagine the Buddha as both bald and black. The great DVD series, Story of India

, begins with the story of early human inhabitants in India coming right across the Arabian peninsula and into western and south-western India. And, if I remember correctly, these people remained largely isolated over thousands of years while humanity spread out across the globe, slowly changing their morphology (appearance) as they did so – those going further north generally becoming paler. Then, as we learn in an India or Buddhism 101 course, a warrior/herder/horse-riding people calling themselves the Aryans (“Nobles”) moved down from somewhere in the Caucases and into north India.

In Buddhism 201 we could talk about Indo-European languages, noting that the same people who went into India also spread out throughout Europe, as far flung as Ireland. The name “Ireland” itself derives from the word “Aryan.” So does the name of another country. Any guesses which one? In any case, these people, along with laying the foundations of a broad variety of languages, were paler than either the people of Africa or those in southern India. Perhaps due to the dynamics of power as the Aryans made their way into India, or due to disease (a thesis powerfully defended by William McNeill in Plagues and Peoples

), darker skin came to be seen as inferior or unclean there.

So here the use of the term “black” (kaṇhā), may fall into the category of a general insult, rather than a literal description. On the other hand, the Buddha may well have been much darker skinned than we are accustomed to seeing him depicted as. Shock. If he were, it might also make sense for later Buddhists to overlook this detail, depicting him in the most ideal form conceivable. We already know for instance that the name “Siddhārtha,” meaning one who’s goal is accomplished, was not ‘given’ to him in the earliest strata of textual evidence, but only appears later. Likewise, the story of his father as a powerful king has been shown to be greatly exaggerated, if holding any truth at all. So perhaps the myth of a fair and ‘golden skinned’ Buddha is just that, a myth.

As a scholar, I would appreciate more attention to this issue. And I’m sure those with anti/post-colonialist tendencies can find further directions to take this. As for practitioners – it seems that Buddhism, both in many doctrines and art, has taken on many different shapes as it has progressed through time and geography. So perhaps whatever way you imagine your Buddha is just fine as it is.

April 14, 2011 Missoula Pet Owner Friends - a personal appeal
Recent Comments
0 | Leave a Comment
Browse Our Archives
get the latest from
American Buddhist Perspectives
Sign up for our newsletter
POPULAR AT PATHEOS Buddhist
1

The Zen Priest Discovers he is...
Monkey Mind