Buddhists with Guns May 7, 2011 Justin Whitaker 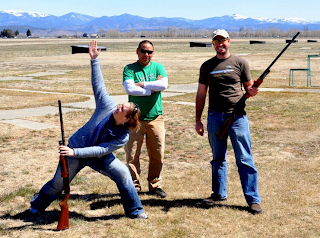 Well, for the record, that’s a yoga instructor (sister), mechanic (brother), and Buddhist scholar (me).

Growing up in rural Montana – about 10 miles north of Helena, the capital city, neighbors had horses, dirt road, cactus in the back yard – we were introduced to guns fairly early in life. I think I skipped the “you’ll shoot your eye out!” bb-gun that many friends were getting and moved on to a pump-action single shot pellet-gun around the age of 8.

After losing interest in killing things for a while, I decided at about 16 that I should take up hunting. I killed a deer. I gave up hunting.

Then I got into trap shooting, joined the ATA (Amateur Trapshooting Association, a kinder, gentler version of the NRA), and toured the state with my dad winning little 1oz silver coins (now worth about $36 each, yay) and other oddities. And then college hit and it’s been about 10 years since I’ve really shot much. But now, back in Montana visiting family, I’ve picked it up again. Family.

File under “ya never know.”

May 16, 2011 Birth of the Rebirthers: A uniquely Buddhist/Hindu Conspiracy Theory
Recent Comments
0 | Leave a Comment
"I've read that borderline persons have a high sense of fairness and BPD is soooo ..."
steven solomon Borderline Personality Disorder and Buddhism (IV)
"I came across this site by accident, It reminded me of a story about two ..."
quacknduck Tourists: Buddha Tattoos are Taboo; as ..."
"eMudhra Limited is a certified body, licensed by the Government of India. eMudhra operates in ..."
Mycaportal Buddhism: Dzogchen and Mahamudra
"folks hav to learn the local laws wen they invade the space"
Joe Biggs Tourists: Buddha Tattoos are Taboo; as ..."
Browse Our Archives
get the latest updates from
American Buddhist Perspectives
and the Patheos
Buddhist
Channel
POPULAR AT PATHEOS Buddhist
1