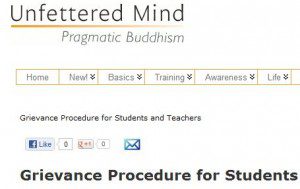 For several months (or in fact, possibly much longer), a former student of Ken McLeod based in Montreal, Canada, has been attempting to put forth a grievance of misconduct on the part of McLeod, a well known American Buddhist teacher and principle teacher of Unfettered Mind (UM) a California-based organization dedicated to modern, pragmatic Buddhism.

The details are still murky, with the former student understandably reluctant to make public the full scale of the actions and relationships in question. However, the fact that there is a problem has become public, and was brought to my attention (along with the former student’s blog) just over a week ago. In that time the issue and blog were mentioned, though only in passing, at the Sweeping Zen website. Students of American Buddhism may find it quite worrying that Ken McLeod’s name is mentioned in the same breath as Richard Baker, Eido Shimano, Dennis Genpo Merzel and others whose charismatic teaching careers were marred by ethical lapses. It is hoped that by discussing the issue here, further clarity can develop so that all parties involved can best move forward with their lives.

According to a blog post dated June 9, 2012, the former student states that she has begun collaborating with An Olive Branch, a Buddhist organization “dedicated to fostering peaceful and effective solutions for spiritual and non-profit organizations” to discuss the UM policy and to put forth her allegation along with one other.

In defense of UM, the president of their Board of Directors, Stephanie Siebert, asserts that no such allegations have been made, with Ivan instead playing email “cat and mouse” in efforts to resolve the issue (July 23 email posted by Ivan). She stated that UM does have a grievance policy available to Ivan and others if they wish to follow it (it’s not clear when the current policy was enacted or placed online).

However, Ivan claims that the policy is insufficient. In an August 4 letter to Robert Conrad, Secretary to the Board of Directors at UM, she states:

1) The only “policy and procedure” Ms. Siebert has offered so far is that I must submit my grievance to her alone and trust her to convey it to the UM BOD.
2) Grievant2 (in an anonymous comment to my post of August 2 which I have verified) states  that, when she submitted her grievance to Ms. Siebert, it was denied by KM and dismissed  summarily by Ms. Siebert.

In his Aug 16 response, Mr. Conrad writes, in part:

I have reviewed some of the correspondence between you and Ken McLeod in which you acknowledged your failed marriage occurring long before you met Mr. McLeod and your desire to have an intimate relationship with Mr. McLeod (with, I might add, no encouragement on his part) after he ceased consulting with you and after he advised you to seek professional help on your marriage.

He also says that he hopes to put forth a full reply to her letter by the end of August.

These claims, the former student writes (aug 24), constitute “false and unsubstantiated judgements about me and the relationship I had with Ken, this time adding disparaging and false remarks about my marriage to my ex-husband.” She furthermore worries that Mr. Conrad’s email treats her more as an adversary and less as a greivant, thus making any open, honest, and fair procedure between herself and the board increasingly unlikely.

I welcome feedback, concerns, criticisms, etc in the comments area and hope that both the former student and those associated with Unfettered Mind can find a way to move forward.

August 28, 2012 Aung San Suu Kyi: Burma, Buddhism, and the Future
Recent Comments
0 | Leave a Comment
"https://www.theguardian.com..."
Donalbain Vaccines, Pharmaceutical Companies and the CDC
"I've read that borderline persons have a high sense of fairness and BPD is soooo ..."
steven solomon Borderline Personality Disorder and Buddhism (IV)
"I came across this site by accident, It reminded me of a story about two ..."
quacknduck Tourists: Buddha Tattoos are Taboo; as ..."
"eMudhra Limited is a certified body, licensed by the Government of India. eMudhra operates in ..."
Mycaportal Buddhism: Dzogchen and Mahamudra
Browse Our Archives
Related posts from American Buddhist Perspectives