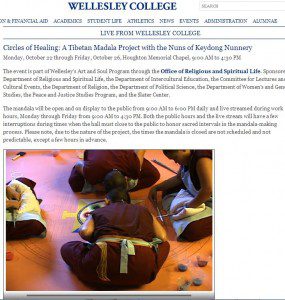 As is often the case, there has been too much going on of late in the world of Buddhism for me to give justice to most of it. Here’s a quick roundup of topics I wish I could have devoted more time to recently:

Tomorrow I’m off with Emily to London for some romantic library-time (her at the British Library, me at SOAS) and then back to Bristol.
Oh, and very last, a wonderful video about Ashin Sopaka (thanks to my friend via the web, a different Ashin Sopaka). Ashin Sopaka, in the film, is a Burmese monk in exile who undertook a peacewalk in Thailand in 2007. Have a look:
Previous Post

October 23, 2012
Is Tibetan Buddhism the most popular in America?
Next Post

October 28, 2012 New Petition to save the Mes Aynak Buddhas
Recent Comments
0 | Leave a Comment
Browse Our Archives
Follow Us!