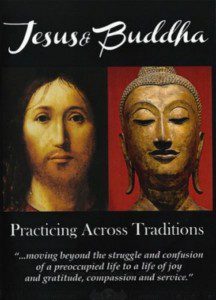 I sat down over the weekend to watch (for a second time), this short documentary, joined by two fellow PhD students, one a Theravadin Buddhist, the other a Roman Catholic. At just 44 minutes in length, it is brief, but perhaps it is the perfect length for a high school or university class on Comparative Religions or a faith group to watch over tea and cookies. The film features three people who are intimately familiar with both traditions:

And when I say ‘both traditions’ I must point out that a limitation of the documentary is that two people are/were Roman Catholic priests and all three are experienced in Zen/Soen Buddhism. As such, the Buddha you meet is the Buddha of Japan and Korea, while the Jesus you meet comes very much through the Roman Catholic tradition (while Chung Hyun Kyung is a Presbyterian, she does not express any ‘distinctively’ Presbyterian views that I/we noticed). That said, the documentary proves to be a welcome entrée into not only Buddhist-Christian dialogue, but also the discussion of the Ultimate or Absolute in general – a conversation that could go well beyond these two traditions.

One of my first questions to my friends was “is this too New Age-y?”  Both shook their heads. Despite needing to be brief and succinct, the discussions from all three of the people in the film were lucid, focused, and well grounded in tradition. Again, they are in the Zen tradition, so Theravadin and/or Tibetan conceptions of / problems with a Creator God are avoided. The Zen teachings conveyed simply suggested that the Ultimate (or absolute or salvation, etc) is not justoutside you, it is within, and it is within everyone.  The trick is ‘waking up’ to this, moving beyond your old/separate/egoic/deluded self. Christian teachings were presented to suggest a parallel:

“For through the Law I died to the Law, that I might live unto God. I have been crucified with Christ, and it is no longer I who live, but Christ lives in me; and the life which I now live in the flesh I live by faith in the Son of God, who loved me and delivered Himself up for me.” (Galatians 2:19-20).

“Know you not that you are the temple of God, and that the Spirit of God dwells in you?” (1 Corinthians 3:16)

Statements in these traditions require interpretation and discernment, but what these practitioners (and others) were able to do is use the teachings and practices of each tradition to more fully inform their own self-understanding and their own practice. Discussions about the problems that come up in trying to practice multiple traditions weren’t addressed, and, given the short time in the video, would have been difficult to give sufficient time to. It will be up to viewers to pick up on and discuss these and compare them with the convergences discussed in the video.

The DVD comes with a handy “Discussion Questions” insert and more can be downloaded at their website. I could see interested Muslims, Jews, Hindus and others also using it as a learning and discussion tool. For those still asking ‘why’ we should care about interfaith/comparative religious thought, the answer should be found in the world around you. You interact with people of different traditions all the time, and if you want greater understanding and perhaps for them to better understand you, these kinds of dialogues must take place. Not to be too political, but it should be obvious that a lack of cultural and religious understanding has been disastrous in our shared human history.

As Max Müller said, “to know one religion is to know none.”

And so it is myself I want to turn in that direction
not as towards a place, but it was a tilting
within myself,

only able to endure it by being no one and so
specifically myself I thought I’d die
from being loved like that.

* For other perspectives, see this one by Dhivan Thomas Jones at the Western Buddhist Review, and Robert A. Jonas at Contemplative-life.org.

March 19, 2013 Essential Advice for new Meditators: An interview with Leigh Brasington by Willoughby Britton
Recent Comments
0 | Leave a Comment
"This is a thoughtful article. I must admit, after living in crowded Hong Kong, I ..."
Gary Price The Coronavirus is coming – Some ..."
"Well explained. Dholavira is also one of the largest site of Indus Valley civilization. It ..."
Kirti Bajaj Major Sites of the Indus Valley ..."
"Nice write up Justin."
Catalin Newport In Hong Kong, the Bodhisattvas wear ..."
"I used to idealize Tibetan Buddhism. I studied with some senior teachers from Shambhala and ..."
Metis Buddhism, patriarchy, abuse, and violence: we ..."
Browse Our Archives
get the latest from
American Buddhist Perspectives
Sign up for our newsletter
POPULAR AT PATHEOS Buddhist
1