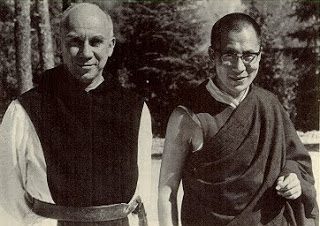 Anyone who knows me or has read this blog for long knows I am a great admirer of Thomas Merton. I remember his name being mentioned to me at a Buddhist retreat some time around 2002 or 3, and then, in a quiet week during my MA in Buddhist Studies, I picked up his Asian Journal where, upon seeing the great Buddha statues at Polonnaruwa, Ceylon (Sri Lanka) he wrote:

“Looking at these figures I was suddenly, almost forcibly, jerked clean out of the habitual, halftied vision of things, and an inner clearness, clarity, as if exploding from the rocks themselves, became evident and obvious. The queer evidence of the reclining figure, the smile, the sad smile of Ananda standing with arms folded (much more ‘imperative’ than Da Vinci’s Mona Lisa because completely simple and straightforward). The thing about all this is that there is no puzzle, no problem, and really no ‘mystery.’ All problems are resolved and everything is clear, simply because what matters is clear. The rock, all matter, all life, is charged with dharmakaya . . . everything is emptiness and everything is compassion. I don’t know when in my life I have ever had such a sense of beauty and spiritual validity running together in one aesthetic illumination. Surely, with Mahabalipuram and Polonnaruwa my Asian pilgrimage has come clear and purified itself. I mean, I know and have seen what I was obscurely looking for. I don’t know what else remains but I have now seen and have pierced through the surface and have got beyond the shadow and the disguise.”

Now an ambitious group of filmmakers has come together to bring you Thomas Merton, the film. “Thomas Merton was a legend. He was one of the most important writers on faith and humanity in the twentieth century. His writing has changed my life and I really want to introduce Thomas Merton to my generation and younger” – Ben Eisner (screenwriter / producer).

This project has been years in the making already. Here is a 2010 pitch:

And now a 2013 campaign is underway to bring in just over $2 million, which will fund 1/4 of the film, enough to get the wheels fully in motion.

From the Indigogo campaign:

In the summer of 1966, world famous monk and peace activist Thomas Merton falls in love with a nursing student half his age, plunging him into the most agonizing predicament of his life. As he endeavors to prevent his secret romance from being discovered by his abbot, James Fox, Merton realizes he must finally choose between serving himself or serving the world.

Why Are We Making This Film?

Like millions of people before me [Ben], I first encountered Thomas Merton through his autobiography The Seven Storey Mountain. Merton invited me on a soul searching journey where I started to ask myself the tough questions about what Merton called the “true self”: the place of freedom within all of us that is unscathed by fear, insecurity and hurt we’ve accumulated from our past. Over the next seven years as I delved further into Merton’s life and writings, I became convinced his story must be told on the big screen.

Merton is the most relatable person I have ever read. He lived his life openly and honestly. Even though he died over 40 years ago, his writings on peace, social justice, and spirituality are more relevant than ever. My ultimate hope is that this film will introduce Thomas Merton to an entirely new audience who might have never heard his name or picked up one of his books. I’m excited to think how this homage to Merton’s legacy could potentially inspire millions of people from all generations, faiths and cultures to love the world in a deeper way.

If you’ve been impacted by Merton as I have, or if you would like to learn more about his brief but incredible life, I invite you to contribute to this project and help us share Merton’s vision to inspire a world in desperate need of unselfish love and indiscriminate compassion.

“I want this film to make people laugh. I want them to cry. I want this to touch people at the depths of who they are with the longings to be at peace with themselves.” – Ben Eisner (screenwriter / producer)

Follow along in Merton’s Asian Journey via the blog: Merton in Asia.

Visit the site of Kevin Miller (one of the filmmakers)

Read one of my blog posts from 2006: Buddhism: bodhisattva Thomas Merton (some of my other posts mentioning Merton)

And check out the film’s page on Facebook: https://www.facebook.com/DivineComedyOfThomasMerton

July 7, 2013
On the bombing at Bodh Gaya, Buddhism's holiest site
Next Post

July 15, 2013 I am Trayvon Martin, I am George Zimmerman
Recent Comments
0 | Leave a Comment
"folks hav to learn the local laws wen they invade the space"
Joe Biggs Tourists: Buddha Tattoos are Taboo; as ..."
"too polite ..if folks are ignorant of local laws they hav to be brought to ..."
Joe Biggs Tourists: Buddha Tattoos are Taboo; as ..."
"Five years, a rescued street-cat from Texas (by way of Seattle). His trip to Hong ..."
Justin Whitaker Progressive responses to the 2020 election ..."
"Big move. How old is your cat?"
Brian Lang Progressive responses to the 2020 election ..."
Browse Our Archives
get the latest from
American Buddhist Perspectives
Sign up for our newsletter
POPULAR AT PATHEOS Buddhist
1