This week the Journal of Buddhist Ethics announced its 20th anniversary edition, available for the very affordable price of: free. As Keown and Prebish write in their introduction to the issue, “It was always our intention that the journal should be a free and open resource serving the interests of the discipline rather than a privately managed concern…. the JBE has been a contribution to a new model of academic publication, one in which academic authors share their work with their peers without the financial and legal constraints imposed by conventional publishers. Perhaps the future will see further developments along these lines such as authors publishing directly on academia.edu and colleagues providing feedback and critique on pubpeer.com.”

Sadly, not too many other publications have moved to the volunteer/free model set up by JBE (and for full disclosure Keown is my Ph.D. supervisor and I have been volunteering as a copy editor for some time now). Like a lot of systems today, much of the academic journal / publishing world is broken.  The people profiting are the corporations that hold the rights to most major journals out there. Have a look at this from a few stories last year:

… in recent years the academic journals have largely been taken over by for-profit publishing behemoths such as Elsevier, Taylor & Francis, and Wiley-Blackwell. And quite a profit they make, too: In 2010 Elsevier reported profits of 36 percent on revenues of $3.2-billion. Last year its chief executive, Erik Engstrom, earned $4.6-million.

One reason those companies make good profits for their shareholders and pay such high salaries to their leaders is that they are in a position to charge high prices. The open-access debate has focused mainly on the exorbitant fees for-profit publishers charge libraries for bundles of journal subscriptions, but I am struck by what they charge ordinary citizens to read my individual articles. – the Chronicle of Higher Education (September, 2012)

With government-funded researchers providing the writing, the editing, the reviewing, and even most of the formatting, you might think that the publishers who benefit from all this would be able to do their part very cheaply, and that subscription prices would be low and falling fast. Not a bit of it: at a time when library budgets are being progressively squeezed, Elsevier—the biggest of all the academic publishers—reports a 2011 profit of £768 million on revenue of £2,058 million, an astonishing 37.3 percent, compared for example with Apple’s 24 percent profit margin in their record-breaking 2011. This makes 2011 the fifth consecutive year in which Elsevier’s profit margin has increased. Publishers are bleeding libraries dry: it’s no wonder that subscriptions are being cancelled left, right, and center.

Since these publishers are effectively government subcontractors, you might think they would be subject to government regulation. Far from it. – The Scientist (March, 2012)

… these profits come at a long-term cost. Authors have long known that they’re being taken for a ride; now, what had been low-level grumbling has broken out into vocal anger. The Cost of Knowledge site lists three specific grievances against Elsevier: high subscription prices, “bundling” of journal sales into all-or-nothing packages, and support for SOPA, PIPA and the Research Works Act, three regressive, punitive measures to further lock down copyrighted works. But while these were the immediate triggers, resentment runs much deeper. Discover Magazine (February 2012)

So, with a bow of gratitude, I turn you to the amazing (free) contents of this year’s 20th anniversary Journal of Buddhist Ethics. Enjoy:

The Journal of Buddhist Ethics, one of the first online academic journals, is celebrating its twentieth year with a special issue. The invited
contributions were solicited by the founding co-editors emeritus, Damien Keown and Charles S. Prebish. All are available for free download from
http://blogs.dickinson.edu/buddhistethics.

David R. Loy, “Why Buddhism and the West Need Each Other: On the Interdependence of Personal and Social Transformation”

Damien Keown, “Some Problems with Particularism”

Abraham Vélez de Cea, “The Dalai Lama and the Nature of Buddhist Ethics”

Michael G. Barnhart, “Impermanence, Anattā, and the Stability of Egocentrism; or, How Ethically Unstable Is Egocentrism?”

If you like that, you might also appreciate http://www.jbeonlinebooks.org/. The books are not free, but are generally a fraction of the cost of what you would get from the big corporate publishers. 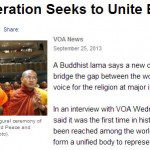 September 27, 2013 Buddhists of the World Unite
Recent Comments
0 | Leave a Comment
"https://www.theguardian.com..."
Donalbain Vaccines, Pharmaceutical Companies and the CDC
"I've read that borderline persons have a high sense of fairness and BPD is soooo ..."
steven solomon Borderline Personality Disorder and Buddhism (IV)
"I came across this site by accident, It reminded me of a story about two ..."
quacknduck Tourists: Buddha Tattoos are Taboo; as ..."
"eMudhra Limited is a certified body, licensed by the Government of India. eMudhra operates in ..."
Mycaportal Buddhism: Dzogchen and Mahamudra
Browse Our Archives
Related posts from American Buddhist Perspectives

Wisdom From Ralph The Dog: A Kick Up...
Before I share Ralph’s wisdom with you, there’s something you need to...
view all Buddhist blogs
What Are Your Thoughts?leave a comment