It may be just a symbolic victory, as these former leaders are aging and unlikely to find themselves in Spain (or anywhere outside of China or strongly allied nations) any time soon. However, the implications are clear enough. One nation at least is willing to hear the grievances of its citizens who have been affected by China’s actions in Tibet. Spain is able to do this because the nation allows “its courts to prosecute alleged war crimes and genocide committed anywhere, provided the victims include Spanish citizens,” and “One of the co-plaintiffs is a Tibetan Buddhist monk with Spanish citizenship, Thubten Wangchen.”

Spanish-speakers might enjoy this video featuring the Ven. Thubten Wangchen, a monk in the Geluk school of Tibetan Buddhism:

I think they’re marveling about his bald head (“do all Buddhists shave their head?”  and then they, naturally, talk football…)

November 15, 2013
India, Pakistan, & a commercial to make you cry with joy
Next Post 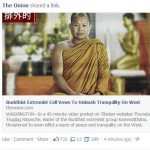