This week the Dalai Lama is grabbing international headlines and as usual, Stephen Colbert’s commentary is a great one to start with: on point, historically accurate, and highly entertaining. Colbert has it right that a major worry is that when the current Dalai Lama passes away, China will likely appoint its own successor, in effect leading to a secular, communist state endorsing the Tibetan Buddhist belief not only in rebirth, but in the specific ‘tulku’ system whereby individuals of extraordinary spiritual capacity can choose to be reborn again and again in order to help others. Thus we would have: double Dalai Lama.

The worry is very real, as this is exactly what the Chinese government has done with the second most important tulku in the Geluk school of Tibetan Buddhism: the Panchen Lama.  The very sad news is that the Panchen Lama named by exiles was in Tibet and has since disappeared at the hands of Chinese authorities.

So for the Chinese government to have puppet versions of the Panchen Lama and the Dalai Lama would be both bizarre and potentially devastating for the image that people have of Tibetan Buddhism around the world. And not all Dalai Lamas are created equal. Tibetans talk of ‘The Great’ 5th and 7th Dalai Lamas, and a few others, including the present Dalai Lama, have been extraordinary in their achievements, but there were many who simply died (often in mysterious circumstances) before reaching an age of maturity. If China’s Dalai Lama is well educated and can grab public attention while the exile’s Dalai Lama decides to write poetry and chase women, then the support many Tibetans enjoy from foreign (and perhaps even internal) sources may be jeopardized.

Colbert goes on to offer his own ‘middle way’ – volunteering himself as the 15th Dalai Lama. One can’t help but notice that map, too, with TIBET, clearly demarcated from its neighboring country of CHINA. 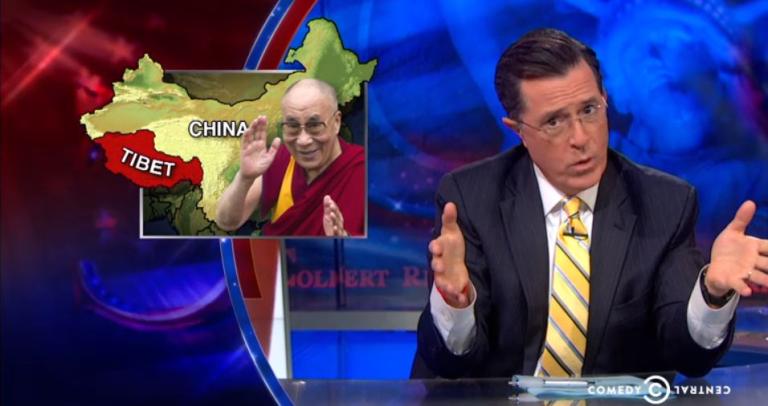 However, Colbert did go on to say that, “I believe Tibet has always been part of China; ever since you guys proved it was with all those guns.” Watch the full episode here:

I seem to remember that the Dalai Lama mentioned something along these lines about 5-10 years ago, but when news spread throughout the Tibetan community the outcry of sadness was so great that he promised to come back. We’ll see what happens this time around. Meanwhile, China has responded by demanding that he “respect reincarnation” and that China would indeed appoint his successor. For more in-depth coverage of the recent growth in Chinese political influence over which heads of state can and will meet with the Dalai Lama, see this story at the Global Post.

September 8, 2014
Malaria, Maoists, and other news from India
Next Post 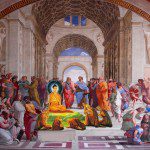 September 17, 2014 Notes on teaching Buddhist philosophy
Recent Comments
0 | Leave a Comment
"https://www.theguardian.com..."
Donalbain Vaccines, Pharmaceutical Companies and the CDC
"I've read that borderline persons have a high sense of fairness and BPD is soooo ..."
steven solomon Borderline Personality Disorder and Buddhism (IV)
"I came across this site by accident, It reminded me of a story about two ..."
quacknduck Tourists: Buddha Tattoos are Taboo; as ..."
"eMudhra Limited is a certified body, licensed by the Government of India. eMudhra operates in ..."
Mycaportal Buddhism: Dzogchen and Mahamudra
Browse Our Archives
Related posts from American Buddhist Perspectives