Ramadan is a time when Muslim communities traditionally come together – to fast, to pray, to reflect, and to encourage one another. In that spirit, the Interfaith Ramadan blog series aims to extend that sense of community to people of all faiths and none. The series provides an inclusive platform where people from around the world share their experiences and offer their perspectives on interfaith issues…

This was the question, and in fact the headline haunting my google news feed for much of the month of May. Today the plight of the Rohingya in Myanmar (or Burma as many still call it)* is far from certain, and the history which has brought us here is even more clouded. Over 60 years of military rule, numerous ethnic civil wars, fear and distrust of foreigners, and extraordinary poverty have all led to country today which would be in many ways socially unrecognizable to those who had visited in the 1940s or early 50s. As the long-time Myanmar expert David Steinberg has written:

Studying Burma/Myanmar is often neither science nor social science, but more akin to art, where truth is in the eye of the beholder. Consequently, different interpretations abound. – Steinberg Burma/Myanmar: What Everyone Needs to Know (2009), p.10

As such, I offer this interpretation as an academic student of Buddhism for 15 years, writing here and elsewhere about Burma for a little over 10 years, and as a global citizen struck by wonderful and ongoing friendships with Muslims for going on 8 years. So, taken in turn, I’ll try to briefly describe the Buddhism of Burma, the country as I know it today, and some of the roots of the violence toward Muslims there.

When and how Buddhism arrived in Burma is disputed. Epigraphic and archaeological evidence points to the 4th century C.E., while later chronicles claim that it arrived with Ashokan missionaries in the 3rd century B.C.E, and yet further claims suggest that a disciple of the historical Buddha brought the teachings to the area (Strong, Buddhisms: An Introduction, p.17).

From there various forms of Buddhism ebbed and flowed, before Theravada was “decisively established following the conversion of King Anawrahtā” (1040-1077)” (Powers, A Concise Encyclopedia of Buddhism, p.48). And it is Theravadin Buddhism that dominates the country today, accounting for around 80-90% of the nation’s population with nearly 60,000 monasteries in the country filled with nearly 500,000 monks and nuns, based on a 2008 estimate by Steinberg.

A central tenant of Theravadin Buddhism – for both monastics and the laity – is the Five Precepts, abstaining from: harming living beings, taking the not-given, engaging in sensual/sexual misconduct, false or malicious speech, and intoxication. The first of these obviously comes to mind when we think of the harm done to Muslims in the country in recent years.

It’s with a heavy sigh that I think of Burma as a nation today. When I visited in 2011 there were some signs of hope for the country and I witnessed much of what makes people project romantic notions of an exotic, peaceful kingdom lost in time as some tourists did recently and Rudyard Kipling did years ago.

To be there is to be transported into the past in countless ways, from the ox-carts to poor infrastructure and subsistence farming, much of Burma has remained static for decades, if not longer. However, it is true also that nowhere in the country has time literally stood still. Lives have come and gone, attempts to bring change arose and fell, and while some sought the slow-steady “Burmese Way” of social and economic progress, others have openly rebelled against the government. This has the turned country that could have been the great economic and social success of the nation into one of the poorest and socially isolated in the world (Seekins, Historical Dictionary of Burma (Myanmar)).

Modern Burma, like so many post-colonial states, is a result of a foreign power -the British- asserting unity over often fractious and internally independent peoples. They, however, simply conquered other conquerers and there is no idyllic peaceful or static past to point to. To look at a map of the country today, the bulky center can be seen as a horse-shoe of Bamar, or ethnic Burmese, in the middle low-lands coming down to the fanning Irrawaddy delta and surrounded on three sides and down the narrow southern coastal strip by smaller ethnic groups. To maintain power, put simply but explained in more detail elsewhere, the central Bamar majority has used military rule to force unity on the country. The burgeoning democracy there is fragile and may fail as it has before.

This brings us to yet another incredibly complex and sad topic: the recent outbursts of violence against Muslims in Burma. These have been predominantly in the western Rakhine state bordering Bangladesh, but have not been limited to that area. There, the Muslims mostly identify as Rohingyas, “a group that originated in part of Bengal, now called Bangladesh” (BBC). This is where things get dicey, as despite the presence of Rohingya in Burma for decades and even centuries, Burmese nationalists or ethnocentrists accuse the Rohingya of being foreigners with no right to exist in the country. They accuse other Muslims of seeking to displace Buddhism through higher birth rates and stories of forced conversions to Islam.

However, what I hope to make clear is that this isn’t a simple case of “Buddhist” aggression toward Islam. As the recent East-West Center report Contesting Buddhist Narratives: Democratization, Nationalism, and Communal Violence in Myanmar (.pdf) states:

Although nationalist movements such as 969 and MaBaTha express themselves in religious terms, they are not seeking to defend a doctrinal stance as such. Instead, they refer more to notions of Burmese national identity and traditional ideas about the fragility of Buddhism and its teachings that have circulated within Theravada Buddhist societies for centuries. (p.x; with thanks to Dr. Paul Fuller, whose blog pointed me to this and numerous other great resources and discussions of Buddhism in general and contemporary Burmese issues in particular.)

The report also speaks of this as a “reflexive defense against what is perceived by some to be the threat of a globally spreading Islam…” (ibid).  However, just as anti-Muslim bigoted Christians in Western nations do not speak for Christianity, these groups -who represent a minority even in Burma- do not speak for Buddhism or Buddhists in general. In fact:

Within the vast Theravada Buddhist corpus and Myanmar Buddhists’ particular understandings of these teachings, there are numerous values and historical examples that can promote religious pluralism, discourage hate speech, and encourage a more critical approach to rumors and misinformation. Indeed, some of these Buddhist counterarguments are already being advanced on the ground in Myanmar… (East-West, p.xi)

One example in action can be found in the Western monk living in Burma, Bhikkhu Subhuti, who has actively reached out to the local Muslim community, bringing them into the Buddhist monastery and fostering greater understanding in his monastic brothers and lay supporters. Another is Sitagu Sayadaw, who recently at a conference in Tehran unconditionally condemned violence against Muslims in Myanmar:

And going back to 2013, in the midst of attacks by Buddhists on Muslims around the country, in the town of Lashio Buddhist monks quickly sheltered and fed Muslims until violence subsided:

Other monks who sheltered Muslims in Burma during attacks were recently recognized by the Parliament of the World’s Religions with World Harmony Awards. In reflecting on his actions, one monk, Rev. Seindita, is quoted saying, “they will have to kill me first,” before allowing aggressors to harm the Rohingya masses.

From outside the country Buddhist leaders have likewise issued appeals, both to their own officials and to those inside Burma, to address the plight of the Rohingya. These include the recent joint letter signed by Jack Kornfield, Ven. Bhikkhu Bodhi, William Aiken, Tara Brach, Lama Surya Das, Alan Senauke, Taigen Dan Leighton, Larry Yang, Rev. angel Kyodo williams, and Rev. Dr. T. Kenjitsu Nakagaki; a statement by the Dalai Lama, and lastly, an Open Letter to Buddhists on Islamophobia by Joshua Eaton and Rev. Danny Fisher (and co-signed by nearly 300 others including myself), inspired by events in Burma in 2012 ahead of the holy month of Ramadan.

The existence of these positive, pluralist, and caring voices within the Burmese Buddhist community and beyond should eliminate any sense that Islamophobia is ubiquitous among Buddhists in Myanmar. Returning once more to the East-West Center’s report:

However, the construction of a Buddhist counterargument that appeals to Buddhist ethics is unlikely to bring an end to communal violence by itself. In order to advance sustainable peace and coexistence in the country, these Myanmar Buddhist arguments for religious pluralism must be complemented by a series of political, economic, and legal reforms to address underlying insecurities and long-standing inequalities between communities. (East-West, p.xi)

As a country that has been so isolated for over 60 years though, it is likely that there are great deficits in inter-ethnic and inter-religious understanding that need to be addressed alongside other problems. Just as the issue at hand is complex, its solution too will be a complex one. None of this, unfortunately, brings us closer to answering the question: Is Myanmar approaching genocide?

But it does, I hope, bring some needed clarity about Buddhism’s role there. It also should bring hope that through the better angels of our nature and the highest values of our religions, we can work together to begin addressing the very acute needs of the thousands of Rohingya living in terrible conditions in Burma as well as the more long-term reforms needed to establish a safe and stable society for all in the country and the region.  As Imam Malik Mujahid, Chair of the Parliament of the World’s Religions, said during the ceremony recognizing the three Burmese monks earlier this month:

“The Buddha proclaimed that we must love and care for all creatures. The Prophet Mohammad, peace be upon him, said that none of you are truly believers unless you wish for another what you wish for yourself. These teachings are at the heart of all our faiths, where the beauty of religion is rooted… While fear, anger and hate rises in America and communities around the world, people of compassion are rising to demonstrate neighborly loving relationships. We must become our brother’s keeper.”

* The name was changed by the current military dictatorship in 1989. To retain the previous name may be seen as throwing allegiance to a colonialist past, as Burma is the name for the nation first designated by the British who ruled over the country from 1824 to 1948. However, ‘Burma’ is also widely used by dissidents who do not recognize the legitimacy of the current regime and its choice to change the name. 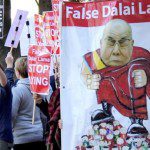 June 18, 2015 Buddhism and Modernity: Conversations at the Edge, all three panels [Video]
Recent Comments
0 | Leave a Comment
Browse Our Archives
get the latest updates from
American Buddhist Perspectives
and the Patheos
Buddhist
Channel
POPULAR AT PATHEOS Buddhist
1