In May the Dalai Lama told the UK’s Sunday Times that he might come back as a “mischievous blonde woman” adding that “then her face must be very attractive” or “nobody pay much attention.”

That didn’t seem to upset too many people, but a fellow Patheos blogger picked it up, calling the Dalai Lama sexist, and I followed up with some context, opening the incident up for conversation with readers.

I also inserted a (non-scientific) poll asking readers if they felt his comments were outrageous or if they thought the whole thing was blown out of proportion. As of now that poll has 520 votes with 49% accusing him of making outrageous comments and 51% saying the whole situation was overblown.

Now he’s made similar comments again more widely discussed and, thanks to a Jezebel author writing: “the highest-ranking Tibetan Buddhist expresses some unexpectedly fucked-up opinions about women and their ‘use.'” everyone seems to be talking about it.

In the interview, from the BBC on Monday, the Dalai Lama is asked whether a 15th reincarnation could be a woman, he responds enthusiastically  “Yes! … why not?” He continues, asserting that “the female, biologically, more potential to show affection.”

The Dalai Lama then leaned forward and reached out to Myrie’s hand with a little smile, saying, “If a female Dalai Lama come, the face must be very, very, should be very attractive.” 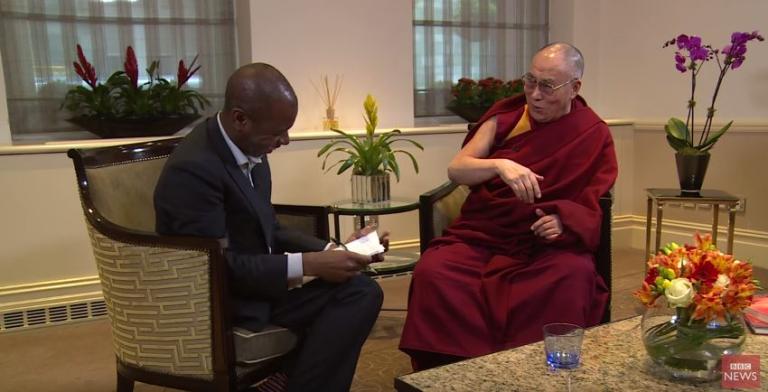 There however, the Dalai Lama continues with the importance of his looks, saying “and in order to become rock star, if my face [making a contorted face] like that, I think [slapping Myrie playfully across the face] many men would do…” (I’m guessing on the last 4 words, if anyone has heard them better, please let me know)

Responses have run the spectrum, from the Jezebel author on one side and plenty of defenses of the Dalai Lama on the other. A writer for the Palm Beach Sun Sentinel suggests that the Dalai Lama is one of those “men who spot a pretty woman and then can’t function, speak or think. They just freeze.” He continues, before segueing into comments on Donald Trump:

Why else is he prepossessed to believe and say out loud that should he be replaced by a “female” she has to be super sexy? Dalai Lama must have pondered this philosophy before telling more than one reporter.

My guess is that the idea of being replaced by anyone lesser is an insult. And should a woman become the replacement, she couldn’t possibly be worthy unless she is pretty enough to make a construction worker whistle at her when she walks past, even when she is dressed in long, religious robes.

In comments to my May post, the three most popular comments all defend the Dalai Lama:

Does HHDL have to say “I’m just screwing with your head!” in order for people to recognize when he’s playing around? Making a joke about sexism isn’t sexism unless the listener is without a sense of humor.

He was joking! And not just joking, but parodying sexism. How is it that so many people have blinders that prevent them from seeing when someone is on their side?

I am an atheist, if anybody think it matters.

I think his joke can be easily rephrased as “If I am reincarnated as a non pretty woman, nobody will listen to me” while keeping the original meaning. Written as such, is it a pretty accurate description of sexist attitude and there is an implicit denunciation of this attitude.

Is sound like a pretty simple but effective satire. I don’t think the joke is that hard to get if you get sexism.

Further defenses of recent comments can be found in today’s International Business Times:

Tenzin Peljor, a Buddhist monk, explained that in Mahayana Buddhism, there are seven features of human rebirth that are required in order to be effective in helping others, one of which is an attractive form. He said that attractiveness, in Buddhism, is associated with the practice of patience and that a male successor would also be required to be good looking.

“Appealing forms attract people,” said Peljor, who is also a board member of the German Buddhist Monastic Association. “To state a fact is not sexist per se. People might think that what he said implied that women are useless if they are not attractive but I think what he means is that you are more effective if you have an attractive form. This is what both, Mahayana teachings and science, state as well.”

Another follower, Carol McQuire, agreed that the comments needed to be considered within the wider context of Buddhist rebirth. She also pointed out that the Dalai Lama’s acceptance of a female successor was a “radical” and “non-sexist” step when considering all previous Dalai Lamas have been male.

Kate Saunders, [the] communications director [for the International Campaign for Tibet, said]: “The Dalai Lama was saying it in a lighter vein – he was clearly teasing – when he was describing the possible looks of a future incarnation. He has consistently shown himself to be stressing on the importance of inner beauty and knowledge rather than external beauty.”

That article goes on to link to a blog called the Tibetan Feminist Collective, where a post asserts, “Yes, the Dalai Lama is still a feminist.” They pull no punches, writing:

His Holiness  the 14th Dalai Lama of Tibet has come under fire for a recent BBC interview in which he addressed the current refugee crisis and urged European nations to overcome their Islamophobic attitudes.

Never one to spare an opportunity to generate inflammatory and attention-grabbing headlines, the Gawker-owned outlet Jezebel quickly seized on a clickbait-worthy story painting the Nobel Prize-winning icon of global peace and compassion as a homophobic anti-feminist with “unexpectedly fucked-up opinions.”

Because of the critical influence of His Holiness on Buddhism in the west and human rights around the world, a Tibetan (note: intersectional) feminist critique is imperative to clarify and contextualize his remarks. [read on]

September 21, 2015
Happy 65th Birthday, Bill Murray - thanks for the laughs, the Dharma talk, and so much more
Next Post 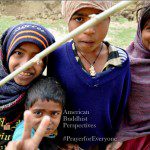 September 26, 2015 May all beings be at ease! A Buddhist #PrayerforEveryone
Recent Comments
0 | Leave a Comment
Browse Our Archives
get the latest from
American Buddhist Perspectives
Sign up for our newsletter
POPULAR AT PATHEOS Buddhist
1