Once again, yesterday we looked at a basic breakdown of the 350+ responses to a poll of Buddhists on the 2016 US Presidential Race. Today we’ll look at some of the breakdowns coming from deeper analysis. As mentioned, due to a change in platforms, I could only export and analyse data from the final 269 submissions made on the Google Form. Those make up the basis for the analysis below.

In this post we’ll look at the data based on age and gender.

Three respondents were under the age of 18 (two of them do not plan to vote in this election, but one does). All three of them selected Bernie Sanders.

As noted in yesterday’s post and the earlier one today the poll data is heavily skewed toward white, middle class men. As mentioned, this is something I hope to work on and will hopefully get some help from friends on in future polls. The gender breakdown was: 92 Females, 169 Males, and 4 in the other category: 1 Genderqueer, 1 human, 1 Non-binary, and 1 trans.

Here we can see a very clear difference between male and female respondents, with Bernie Sanders getting selected by 15% more of the males who took the pole and Hillary Clinton getting over double the support (21%) from females in the poll. Also noteworthy were the five Jill Stein write-ins by male voters and the one from the other category.  Stein will be added as an option in future polls.

I think I’ll call it good with this data. I’ve learned a lot (don’t use SurveyMonkey) and will be asking for help on future surveys to get better responses from women and the Asian American Buddhist community. With larger Asian Buddhist turnout we should – as per Jeff Wilson’s writing in our last post – see more responses in favor of Republican candidates. Hopefully this will allow us to chart how opinions shift as the field there thins. Similarly, despite Hillary Clinton’s strong turnout today, Bernie Sanders has vowed to stay in the primaries until all states have voted. That means we’ll have plenty of time for his either gaining or losing support among Buddhists.

A friend suggested I add a “cradle” vs “convert” question and I’m strongly considering this, as many Asian Buddhists (himself included) are in fact converts and do not align in general with “cradle” Buddhists such as those mentioned in Wilson’s writing (“Anti-Communism drives many such Buddhists into the Republican Party, as does similar views on traditional values, economic policy, patriotism, and other issues.”). A third option here would be “sympathizers” or individuals who hold other religious affiliation but are influenced by Buddhism in thought and/or practice. Thoughts on this question would be welcome.

I also plan to ask respondents to select “Asian”, “Black”, “Latin@”, “Mixed”, “Native American”, and “White”. This is based on largest groupings of self-identified race/ethnicity on the recent poll. There will be an option to further elaborate on any or select “other” and fill in a precise self-identification.

There were a large number of Unitarian Universalists included in the “other” under religious affiliation, so that will also be added as a category. 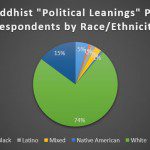 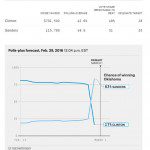 March 1, 2016 It's Images like this that give Sanders supporters hope
Recent Comments
0 | Leave a Comment
"Well explained. Dholavira is also one of the largest site of Indus Valley civilization. It ..."
Kirti Bajaj Major Sites of the Indus Valley ..."
"Nice write up Justin."
Catalin Newport In Hong Kong, the Bodhisattvas wear ..."
"I used to idealize Tibetan Buddhism. I studied with some senior teachers from Shambhala and ..."
Metis Buddhism, patriarchy, abuse, and violence: we ..."
"its almost as if yoga can't be associated with hinduism, it's like a taboo for ..."
edl Can Western Appropriation of Buddhism, Mindfulness, ..."
Browse Our Archives
Follow Us!