Barry Kerzin is an extraordinary person. A medical doctor, a philosopher, and a Tibetan Buddhist monk. He has been featured on PBS advocating for more compassion in medicine and has given two TED talks, one on happiness and the other on compassion and anger management. Today he writes on forgiveness:

At one level, forgiveness means you shouldn’t develop feelings of revenge. Revenge harms the other person. It is a form of violence and usually leads to counter-violence – so the problem never goes away. At another level, forgiveness means you should try not to develop feelings of anger toward your enemy. Anger doesn’t solve the problem. It brings uncomfortable feelings to yourself and destroys your own peace of mind.

Anger doesn’t just ruin your peace of mind, it can make you physically sick. In an article last year on “the science of forgiveness,” journalist Megan Feldman Bettencourt described the many physiological effects of holding tight to anger and blame. Here the ties between physical health and emotional happiness are bountifully apparent, as the article’s subtitle tells us, “When you don’t forgive you release all the chemicals of the stress response.”

In her book, Triumph of the Heart: Forgiveness in an Unforgiving World, she explores further the lives changed through the process of forgiveness, drawing “on cutting-edge research showing that forgiveness can provide a range of health benefits, from relieving depression to decreasing high blood pressure. She examines situations as mundane as road rage, as painful as cheating spouses, and as unthinkable as war crimes.”

In reading stories of forgiveness, it becomes apparent that anger itself is not unwarranted or unhealthy. But hanging on to anger is. The act of forgiveness is not for the other person, though often times what could have been an impassable rift between two beings is healed. The real importance comes in healing oneself which allows not only greater peace and happiness in one’s own life, but ensures that the harm does not get passed on down the line. The stories again show that those who cause harm are themselves almost always victims of past abuse.

even though [forgiveness] involves parts of the brain responsible for reason, it also requires a counterintuitive, and some would argue, irrational, choice: “You wronged me, but I forgive you, anyway.”

This moment of truth, “you wronged me” is important. Especially as we see so much widespread racial and religious violence in our world today. A movement from denial to forgiveness is useless (see spiritual bypassing). But the move from the truth of the harm to forgiveness is also essential. As Zen teacher Wayne Codling recently wrote, we too often cling to rightness (or righteousness) at the expense of kindness.

In a Buddhist morality the importance of punishment is diminished and our whole moral structure takes on a softer configuration. Meticulous morality becomes more of a scrupulous morality. This means less behaviour that is energized by fear and more behaviour motivated by a sense of personal value and balance. Meditation is the activity that allows that small shift to occur: initially as a recognition of its veracity and then as an evolving reference point for thought, word and deed.

Zen meditation teaches the techniques of reducing toward zero such internal activities as judgments, opinions and attachments of all kinds. When we pay attention to our breath, the mind trends toward stillness and calm. Having zero desire beyond breath and posture, there is little suffering. In meditation we reduce suffering in which we are complicit and by doing not-doing we are not the cause of further harm to beings.

“They insulted me; they hurt me;
they defeated me; they cheated me.”
In those who harbor such thoughts,
hate will never cease.

“They insulted me; they hurt me;
they defeated me; they cheated me.”
In those who do not harbor such thoughts,
hate will cease.

For hate is never conquered by hate.
Hate is conquered by love.
This is an eternal law.
Many do not realize that we must all come to an end here;
but those who do realize this, end their quarrels at once. 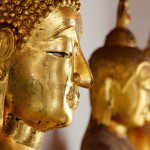 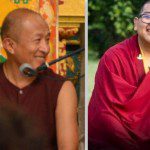 August 22, 2016 Dzongsar Khyentse Rinpoche on the "outdated" Tulku system in Tibetan Buddhism
Recent Comments
0 | Leave a Comment
Browse Our Archives
get the latest from
American Buddhist Perspectives
Sign up for our newsletter
POPULAR AT PATHEOS Buddhist
1