Can Western Appropriation of Buddhism, Mindfulness, and Yoga be Good?

Can Western Appropriation of Buddhism, Mindfulness, and Yoga be Good? July 14, 2017 Justin Whitaker

Patheos Explore the world's faith through different perspectives on religion and spirituality! Patheos has the views of the prevalent religions and spiritualities of the world.
As Buddhism continues to mature in the Western world, we are currently seeing an explosion of one particular aspect of the religion: mindfulness. As we look at the growth of mindfulness practice today, along with its relationship to various forms of Buddhism in the West and around the world, it is often helpful to look at a similar “Eastern” practice that has taken up roots in the West: yoga.
I put “Eastern” in scare quotes because some writing has recently suggested that what we call yoga today is a very recent mish-mash of exercises, some deriving from British military calisthenics. As Michelle Goldberg writes in the New Yorker:

Instructions for postures, or asanas, appeared much later, in medieval tantra-inflected texts, such as the “Hatha Yoga Pradipika.” Even in those works, however, you won’t find many of the positions taught today as yoga. Fifteen poses appear in the “Hatha Yoga Pradipika,” most of them seated or supine. There are no sun salutations, no downward-facing dogs or warriors. There are instructions for drawing discharged semen back into the penis, so as to overcome death, and for severing the tendon connecting the tongue to the bottom of the mouth, and lengthening it so that it can touch the forehead.

My studies on the history of mindfulness haven’t found anything quite as interesting as discharged semen retrieval, but it has found the meanings and practices around the term have varied throughout history in a similar fashion. As Pierce Salguero pointed out in his recent roundup of Critiques of Mindfulness, a particular Buddhist concern is just this: that modern “mindfulness” was not true to earlier understandings, specifically of the term sati.
As a statement deriving from a traditional Theravadin perspective, I think this is true. And for historical-education purposes, it needs to be noted. But for many practitioners, it also might be banal. After all, throughout Buddhist history, each new school of thought used certain terms in ways that are different from other schools. It also might be beside the point for those who are focused on the practicality of the definition over the historical accuracy.
Turning then to yoga, I note a recent story from Religion Dispatches on how black women are using Trap Yoga as a practice of resistance. On the one hand, we’ve seen Western Buddhism broadly characterized as cultural appropriation – along with yoga and mindfulness – whereas on the other hand we have seen people using these practices and ideas in order to generate patience, strength, community, and fortitude in the midst of fighting oppression.
My own work on Buddhist ethics has led me to see that intention is key, along with contextual understanding or wisdom. As such, it becomes incredibly difficult to paint any activity in broad strokes as either morally wholesome or unwholesome. This is echoed by:

Dr. Andrea R. Jain, an expert on the history of yoga and author of Selling Yoga: From Counterculture to Pop Culture, [who] feels that reinvention and replication has always been part of the history of yoga, and doesn’t believe all appropriation is automatically colonialist or imperialist.

“It’s not like there’s some authentic, original tradition. Yoga has always been pluralistic and divergent. Appropriation is bad when it’s done in service to profit or the concentration of wealth. When you have appropriation trying to subvert various forms of oppression, then it’s a good thing.”
Rogers feels what makes trap yoga so relevant, especially now, is that it gives people a moment to take care of themselves in a space that feels native and comfortable.

Is this equally true for those taking up mindfulness and other Buddhist practices?
Support independent coverage of Buddhism by joining a community of fellow learners/practitioners at Patreon.
‘Like’ American Buddhist Perspectives on facebook. 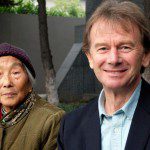 July 11, 2017
Buddhism, Christianity, and an Emerging Superpower: An Interview with Michael Wood from "The Story of China"
Next Post 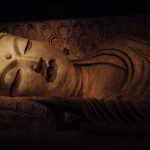 July 19, 2017 On the Death of a Teacher: A Buddhist Teaching
Recent Comments
0 | Leave a Comment
Browse Our Archives
get the latest from
American Buddhist Perspectives
Sign up for our newsletter
POPULAR AT PATHEOS Buddhist
1