Love In A Time of Paranoia: A DREAMER’s Story

Love In A Time of Paranoia: A DREAMER’s Story April 25, 2013 Arlene Sánchez-Walsh 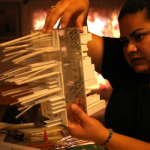 I resist writing about immigration and the current debate over long-overdue reforms, for many reasons,  probably because I don’t want to be typecast as another Latina who has a secret trove of knowledge on the subject, as some in the media and academia seem to believe since we are asked to comment on it constantly and usually end up offering something in the way of an informed opinion. Though as a 3rd generation Mexican American, the Sánchez family has not had to worry about La Migra since 1907, when such a thing did not exist. This week,  I really wanted to write about something else….

I wanted to write about Saul “Canelo” Álvarez, a red-headed Mexican boxer, who is one of the most exciting prospects in that tarnished sport–and how his public displays of Catholicism, complete with the life-size Santa Muerte figure in his corner, would have caused such grief to both traditionalist Católicos and evangélicos. Then I figured, I am just looking for a reason to write about boxing…

I wanted to write about my last days in Texas, and how I just don’t understand how this state, with its history of progressive Texas politics, has the (ill) will to elect people like Rep. Louis Gohmert,(R) who claimed last week, that Al Qaeda and Mexican drug cartels were in cahoots and infiltrating the borderlands, training people to “act like Hispanic” –but Louie, you are too easy a target and I figure whatever swath of Texas keeps electing you, deserves you. The key here is to understand that for a large percentage of the population–conspiracy theories are not fictions–they are a means of controlling the narrative–which is why they are powerful and why basing public policy on them is truly bewildering.  I had to get out from under the craziness of Gohmert, et al and went looking for some good news out of last week’s dirge.

So I turned to my hometown paper, the LA Times, where Itzel Ortega, brought over the border in her mother’s arms when she was a baby, just wants to be normal, wants to be an architect (hermana, way to go with that math thing!), but is caught up in the Kafkaesque liminal space of living in the US without being a part of the US–a more common feeling than you think.  An outstanding student, she  was unable to secure loans to attend Cal Poly Pomona–until her former teacher, Leticia Arreola–influenced by her Christian faith and her life experience as a daughter of immigrants–decided to pay for her former student to go to college.

Well, as anyone who knows me will tell you, I am a not a touchy feely type, and emotionally, I don’t breakdown all that often. But this story, linked here, http://www.latimes.com/news/columnone/la-me-ff-immigrant-teacher-20130423-dto,0,2505430.htmlstory  is exactly what I think Christianity is all about and it made me tear up. I have also been uncharacteristically optimistic about immigration reform because there is now a majority of white evangelicals (62%) according to a Pew survey who support reform, and there are solid coalitions of progressive religious folks who support reform. So I am hopeful that there may be some momentum for change, but I remain less hopeful about the slow descent into the conspiracy theory labyrinth that many conservative evangelicals see as an salve for their collective political anxieties.

Some of these alternative narratives include: preparing for jihadist take-overs, (Oak Initiative), warning about the perpetual rise of the Illuminati (Pat Robertson’s CBN), and so many many more.  Being  predisposed to believe conspiracy theories is nothing new–historically, Evangelicals were apt to blame the Jesuits as the agents of the secret cabal trying to take over the world, but I suppose that is passé. (Though Pope Francis is a Jesuit and I haven’t checked my conspiracy websites today). There are a myriad of psychological explanations for why people accept conspiracy theories, and perhaps the best one I have read is the fact that people are predisposed to them, they are driven by big events/issues, and they become solidified when they achieve a “self-sealing nature” meaning that there is no empirical proof or logical reasoning that matters beyond confirming what one already believes—and that is no more true today where immigrants are the new phantom repositories for all of our fears.

What, you may ask, is the way out of this self-sealing nature? Perhaps it lies in the simple act of generosity that Arreola accomplished for her student, out of her experience and out of her Christian faith–she had been taught to give–without expecting anything back in return.  She did not see her student as an illegal object, subject to warehousing, part of a silenced assembly whose legality is under constant debate.  Arreola saw herself in Itzel—and you know what, I am betting that in deliberating over whether to give her life savings to this young, enterprising, and brilliant young woman–she may have even seen Cristo Jesús. It seems that we can undo the damage that reckless and baseless rhetoric wishes to inflcit if we act like Leticia Arreola, if we foster that kind of Christian action.  Since I am in such an optimistic mood let me hope that with Arreola’s action, and so many more random acts of kindness–anonymous cups of water in the deserts of the Southwest, we may be countering the cruelty, the overt racism, and the constant debasing of people’s hard work and subverting of their children’s dreams-we may see them as us, we may see them as Him. Wouldn’t that be nice…

April 16, 2013
The Changing Face of Latino/a Evangélicos
Next Post