The War On Guns: How It’s the Same Thing as the War On Drugs

I live in the hood right now; they call it the badlands, “known for an abundance of open-air recreational drug markets and drug-related violence.”[1]

The other night at about 3:00am I got up to use the bathroom only to hear 5 or 6 shots (or firecrackers?) go off. The first house I stayed in there was a hole in our window; you guessed it, that was put there by a bullet. While making lunch a couple days ago I again heard a few shots raddled off, this time it was right outside my house.[2]

But, here’s the thing, the longer I’m here the more I begin to wonder: who is firing off more shots, the police or the community?

Ironically, I want to say that the only violence I’ve seen and experienced [personally] here in this “hood,” has been from the privileged people casually colonizing, “saving,” or policing the area. I’m far more afraid of the privileged persons ignorance or the police officer patrolling than I am the darker skinned person merely existing. Soon enough, the privileged will label me and any other educated person as “violent” when in reality it’s just our proximate existence that will shine light on their colonistic and colorblind ignorance.

I haven’t fact checked it, but I’ve been told that the train stop (which you can see from my bedroom window) used to be the biggest drug trafficking port in the U.S. But, what I do know to be incontrovertibly true is government intelligent agencies have admitted that “guerilla armies it actively supported were smuggling illegal drugs into the United States – drugs that were making their way onto the streets of inner-city black neighborhoods.”

It’s bizarre though, that when the Reagan Administration declared this war on drugs it was “waged almost exclusively in poor communities of color, even though studies consistently show that people of all colors use and sell illegal drugs at remarkably similar rates…”[3] What’s even more bizarre is that crimes related to drugs were on the decline, but after this war on drugs was declared imprisonment rates have since quintupled while two-thirds of this prison population comprises of people arrested because of drug offenses. And not soon thereafter crack cocaine hit the streets in inner-city neighborhoods, in which, as stated above, in ’98 were supported by government agencies.

“The drug war was part of a grand and highly successful Republican Party strategy of using racially coded political appeals on issues of crime and welfare to attract poor and working class white voters who were resentful of, and threatened by desegregation, busing, and affirmative action.” – Michelle Alexander

As Michelle Alexander goes on to document in her book the New Jim Crow, “The drug war has been brutal—complete with SWAT teams, tanks, bazookas, grenade launchers, and sweeps of entire neighborhoods—but those who live in white communities have little clue to the devastation wrought.” Any one who has suffered from a helicoptering parent knows that the elongated exposure to being constantly watched leads to a natural anxiety of eventually being caught. Because, let’s be honest “You put a police car on anyone’s tail for 500 miles, he’s gonna get a ticket.”[4] They knew that you not only create felons, but you take away one’s ability to vote against you, creating a permanent second class felon.

Reagan’s plan, it worked. This war on drugs has seemingly only lead to a mass incarceration; it turned out to really only be a war against the already oppressed person and a subversive mission to pad the private prison companies pocket. For those of us who, right now, cannot fathom this evil Let us (including myself) not be naïve and ignore the fact that this empire was stolen from the native, built by the hands of slaves, and watered with the blood of the those that threaten it. Remembering our history, what I’m saying is really not that outlandish.

Let’s just call it as we all see it, when Reagan incited this so-called “war on drugs,” he really was just inciting a war against the impoverished, the white working class, and/or the innocent black life. He just did it with a little bit more savvy as H.R. Haldeman said it a bit more bluntly: “[T]he whole problem is really the blacks. The key is to devise a system that recognizes this while not appearing to.”[5]

Swinging it Back to Gun Control:

Please know that I truly hate and despise guns – I will probably never own one myself, but if we want to reform the way we use weapons I’m not sure creating more laws is the simple answer.

All this to say, with the existence of our oppressively ruthless oligarchical system I get highly skeptical of when privileged folk begin to legislate and (inadvertently?) declare this “war on ‘guns.'” Is it not fair to think that this will seemingly only take us one step closer to legalizing things such as “New York City’s morally indefensible racial dragnet program called stop-and-frisk,” or at the very least give more “reason” to the militarization of police perpetuating a culture of brutality?

Not many people know this but the “the KKK began as a gun-control organization…” As The Wall Street Journal acknowledged, “It was a constant pressure among white racists to keep guns out of the hands of African-Americans, because they would rise up and revolt.” While in 2003 the book “The Challenge of Crime” acknowledged that felons or “second-class citizens,” own the majority of stolen or illegally owned guns many who I suppose have been imprisoned for drug offenses.

The reactive political pushback towards the idea of decriminalizing marijuana that will in consequence lower the rates of incarceration, just further exposes the mechanics of systemic structural violence (e.g. capitalizing on systemically oppressive racism).

If black youth, that are three times less likely to engage in the illegal sales of drugs than white youth, are being imprisoned at unspeakably higher rates, then why would I believe whites, that are twice as likely to purchase guns, will be the one’s in which these laws are being targeted at? As progressives let’s not get caught in doing the same exact thing with guns, in which we accuse the conservatives of doing with drugs.

Those that will be arrested and imprisoned will be those communities that have already been riddled and beaten down by Reagan’s supposed war on drugs.

I get very skeptical when people start to talk about abolishing the second amendment by legislating new laws that will seemingly just incarcerate more black and working class white people (who ironically will vote for Trump) and also don’t realize that it doesn’t work that way. Yes, more whites purchase more guns, but gun violence disproportionately effects the fiscally poor and already oppressed.

You want power, fine; You can have power, without having to strip the dignity of the other by profiting off their oppression. #amiright?

Hypothetically, just throwing productive ideas out there, what if you just didn’t import drugs into these inner-city communities to win a vote or profit off of the incarceration and suffering of innocent people (white, black, Asian, Latino)? I mean, what if we spent more money on reforming the prison than we did on building prisons? Especially if our Agenda is to end violence, as opposed to incarcerating?

[2] I want to be clear that I am not making any claims that I am somehow a victim in this, but rather I’m acknowledging I’m only but a tourist in the midst of someone else’s oppression.

[4] To give these guys the benefit of the doubt (but not really), I don’t think it’s that they hate black people (although they do) so much as it’s that they love money. They merely see and have found, historically and traditionally, a way to earn more money through the oppression (and incarceration) of the black life. You have to understand that these men would trade in there own mother if it meant they were given infinite amounts of money and power. In other words, it’s not about race, its about using whatever means they can in order to gain more power by making more money. 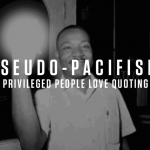 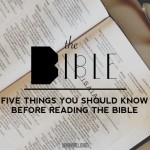 January 27, 2016 Four Things You Should Know Before Reading The Bible
Recent Comments
0 | Leave a Comment
Browse Our Archives
Related posts from Andy Gill