Understanding Why Christians are Anti-Trans 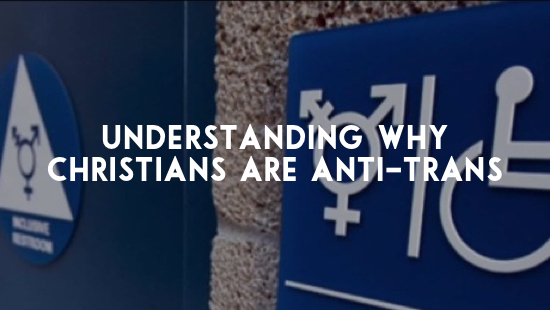 I honestly don’t understand this debate over whether or not those who identify as transgender should be allowed to use the bathroom in which corresponds with their gender. It’s not the nuanced differentiations between one’s gender and one’s sex; it’s the the psychology behind why this angers conservative Christians that I don’t understand.

http://www.cnn.com/2016/04/24/opinions/trump-transgender-bathrooms-opinion-cupp/Question: why are Christians so riled up by transgendered people using the bathroom in which corresponds with their gender…?

I’ve read up on the “safety issues” but have found that there’s really no issues regarding safety, there’s only a threat to the conservative christians comfortability. In other words, it challenges their biblical worldview by forcing them to begin questioning that if they’re wrong about this, then they must be wrong about that. Thinking, I admit is tough, but then again so is a loving understanding.

Either way, here’s the thing, I’m fine with their biblical worldview, it’s taken a lot of work for me to get here, but what I’m still not fine with is when Christians impose their worldview onto innocent bystanders through the means of legislation.

It always seems to then become more than just failed attempts at legislating their “morals,” but turns into dehumanizing the innocent other. For instance, by making empty and unfounded claims that trans people will be tempted to assault you or molest your child is not only defaming someone you don’t know, but making judgements that have zero validity. Again, it’s undignifyingly elementary.

“Our transgender friends aren’t going to just snap while washing their hands and assault you. They’re not trying to sneak a peek or cop a feel. They’re just trying to freakin’ pee.” – Benjamin L. Corey

We’ve been here before and we’ll probably see this soon again. With the anti-gay Duck Dynasty travesty and the Chik-Fil-A debacle it makes one think that we have not only missed an opportunity to love, but instead spitefully seized the opportunity to wrongly portray the Gospel (e.g. Lining up in support of Chik-Fil-A, posting hateful statements on Facebook, this is what I’m talking about in regards to “theological malpractice.”).

It might not seem serious to those of us who do not identify as LGBTQ, but youth are being made homeless, suicide and depression rates are soaring, and meanwhile we’re hatefully legislating a bill that would further isolate those in need of love.

Allow me to ask a question to the anti-trans Christian:

How is this argument helping you win, perpetuate the gospel, and be more like Jesus? Ringo Star, Jimmy Buffet, Bruce Springsteen, shoot entire institutions are beginning to boycott North Carolina because of this so-called “Christian agenda.” When General Electric et al. are acting more Christlike than your church we have an issue. Do you, as a conservative Christian, truly believe that our ever growing nonChristian nation is feeling your love and emulation of Christ’s gospel?

In light of productivity, the question I want to leave you with today is this: How can you as a Christian allow the other to feel loved not shamed, dignified not dehumanized, and as if they encountered an unconditional loving presence in you so authentic that it transcends any previous barrier our fallen society has put in place…?

(photo is a screen shot from CNN) 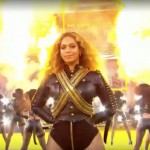 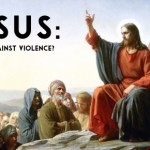 June 6, 2016 Jesus Was Not a Pacifist (A kind response to Benjamin Corey)
Recent Comments
0 | Leave a Comment
Browse Our Archives
Follow Us!