5 ways to know you’re in Britain at Yule

This week, I’m focusing on a national and very human sense of place — Britain at Yule.

Whether we celebrate Christmas, Saturnalia, Winter Solstice, Isaac Newton’s Birthday or Consumermas, there are some non-negotiable cultural constants here.

1. Christmas stock has already been out in the shops for at least two months

One of the most distressing things about not making a big deal of Hallowe’en, and not having Thanksgiving, is that shops – especially big corporations – feel free to start their Christmas hype in early October. The earliest I’ve seen Christmas items in the local supermarket is September. Yes, September. This makes me very sad.

Most workplaces have a Christmas party, but more than that, from about 14th December, the expectation — at least in the places I’ve worked — is that no-one’s really focused on work, and the more silliness, parties, mince pies and crackers there are, the better. (Unless you’re in the NHS, social work, or one of the emergency services, of course.)

In schools, children have been working on their Christmas presentation for weeks, and in the last week of term, classes – at least in my day – mostly involved subject-themed games, films and lots and lots of sweets.

Mmmmmm, mince pies. I was shocked when I discovered these weren’t a universal English-speaking tradition. Dried fruit and peel, which has been soaked in brandy for… a while, encased in sweet, short pastry. What’s not to love?

My favourites are made with some of the flour for the pastry replaced with ground almonds.

Shiny paper wrapped around a cardboard tube. It holds a small gift, an awful joke, and a paper crown, and it goes off with a bang when pulled by two partiers (one at each end). It’s more or less compulsory at a traditional Christmas dinner (generally celebrated as a seasonal obligation, regardless of religion) for everyone to wear one of the paper crowns.

Panto — short for pantomime — is very difficult to explain to someone who’s never seen one. A panto is generally a stage adaptation of a fairy tale: Cinderella, Aladdin, Sleeping Beauty, etc. There are heroes, damsels, and villains, a happy ever after, and a host of contemporary pop culture references.

That part is easy enough to understand. But there are some conventions of panto which just have to experienced:

Here’s hoping you had a Merry Winter Solstice, and wishing you a very happy Saturnalia for tomorrow.

And for those of you who prefer to celebrate Isaac Newton’s birthday, here’s a little treat: 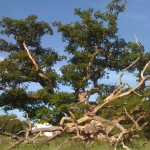 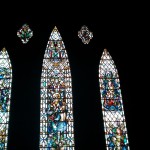