Patheos Explore the world's faith through different perspectives on religion and spirituality! Patheos has the views of the prevalent religions and spiritualities of the world.
Before the plane left Dar Es Salaam, a voice came over the P.A. to tell us that the chemicals they were about to spray posed no risk to our health. Then the flight attendants walked up the isles between the seats spraying something from small canisters up into the air to ensure that no dangerous African bugs would hitch a ride with us to Europe.

I covered my nose with my favorite snuggly blanket. I don’t believe for one minute that a spray meant to kill bugs has no effect on my health. It’s not that I don’t believe in science. It’s just that we’ve been lied to so many times about such things. No one was telling us exactly what was in the spray, nor we’re they offering us studies to review for ourselves. We were no different from the bugs right then, stuck in a plane with a mystery spray that may or may not be deadly.

Of course, my mind flitted to the words I’d typed just a few days before about being paranoid about African bugs. In all fairness, it’s not just African bugs that bother me. It’s tropical and equatorial bugs. Bugs that like hot, humid places. I like New Orleans, but the cockroaches are reason enough for me to never live there. I know , I know. It’s awful. It’s just not right to stereotype a place because of the presence of bugs of a certain size. It’s not even about them biting. Scottish midges are annoying and bitey, but they don’t gross me out or make me stifle a squeal of horror when I notice them nearby. But centipedes that might crawl under my pillow at night? That freaks me right out.

But, let’s be honest here: I was extra paranoid about bugs when I first arrived in Tanzania, and I had to consciously fight that in myself. Clearly, I am not the only one with special visions of scary African bugs in my head. African bugs are so scary that the airline has to spray the plane before takeoff when leaving Tanzania.

Now, I can hear some of you already telling me through the screen that I’m being absurd. There really are dangerous bugs in Africa and it’s important to protect one continent from the pests of the other. If we were on our way to a island, I could buy that argument. But we weren’t. We were headed to a place that is technically reachable by car, as long as you don’t mind a bit of war and other danger along the way. The last time I checked, bugs aren’t to fussed about human political problems. Also, those bugs that really like hot, humid places are rarely good at surviving much colder climes.

Let us also take into consideration how there is a quarantine around California intended to keep the fruit fly and certain other pests out of the state. If you drive across a highway border, they stop you and make you throw away any produce in your car unless you have a special permit. Have you ever sat on the tarmac in a plane in, say, Portland that was headed to San Francisco and had the flight attendants spray you and your luggage down to make sure you weren’t bringing any bugs into the state? No? Me neither. 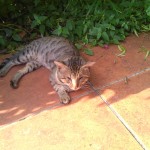 June 8, 2015 Living Values in A Place
Recent Comments
0 | Leave a Comment
Browse Our Archives
Related posts from A Sense of Place