Sheep in my front garden: we’re not in Texas anymore

Sheep in my front garden: we’re not in Texas anymore February 28, 2013 Traci

I heard a rumor that Mercury is retrograde this week.  If that is indeed the case, I believe it has taken control of our blog!  :eep:  So, in the spirit of easy communication and plain ole FUN, let me share a story.

Tuesday morning, as I lazed in bed, I thought I saw a white blur dart past the window.  This seemed odd, considering I live in a two-story farmhouse and my bedroom is upstairs.  I was reluctant to get out of my warm bed to investigate, so I pulled the comforter up around  my chin.  A few minutes later another white blur darted past the window!  I thought perhaps we were under attack from fat white pigeons, or it had begun to snow large boulders.  Both of which are sights not to be missed! So, I braced myself against the chill room,  pushed away the covers, and knelt in the window seat to peer outside (and see what I might see.)

My front garden was full of Fluffy Sheep! Nibbling away like nobodies business.  Lambs bounding into my flower beds, snacking on my newly emergent crocus!  Hefty auld girls stretched up onto the stone walls eating the ivy!   I watched these shenanigans for half an hour before I rang Mr. McCarthy, who sent his son down to lure them out with a bucket of feed.

I went about my day then, amused at the antics of the morning.  After lunch, I happened by the upstairs window and thought I saw another white blur dart past.  Now wise to the phenomena, I pushed the window open and peered down.  Black faces looked up at me.  The little fatties!

We didn’t wait for Mr. McCarthy this time.  I sent Himself around back, to make sure the gate was closed and to keep them hemmed in at the front.  I picked up a little twig to swish at them.  As soon as the fattest one saw me coming, she LEPT – quick as a flash (a mighty feat from the size of her) – up onto the stone terrace, scrambled behind the Thorn, and under the electric wire back into the pasture….the rest of her flock following.

We put an orange cone up where they got in, so Mr. McCarthy would know where the jail break occurred, then put a flat board over it.  When we spoke to him later, he told us the hefty girl is an old lady and is the ring leader of the little flock.  She apparently leads those girls all over the place!

Now, if I could just figure out how she flew in the air past my second story window!

I recorded several minutes of video footage, which I hope you enjoy.  May it bring you peace during this time of Mercury retrograde! 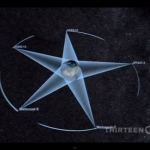 February 21, 2013
What Place is This? Our spaceship among the stars
Next Post

March 1, 2013 Make Magic of Your Life: wherever you are
Recent Comments
0 | Leave a Comment
Browse Our Archives
get the latest from
Pagan
Sign up for our newsletter
POPULAR AT PATHEOS Pagan
1