By the light of the harvest moon: autumn equinox thoughts

By the light of the harvest moon: autumn equinox thoughts September 20, 2013 Elinor Prędota

Last night was the first full moon since early spring when I’ve been able to go out into the night and see my way by Her light.

I always find the shift into the dark half of the year difficult. One of the great consolations of this time for me is the light of nighttime, whether as the wonder of the Milky Way spread out across the heavens, or the Northern Lights, taking my breath away, or the blue shimmering radiance of the full moon in the night sky.

The first time I experienced the full moon’s light with no streetlights to detract from Her brilliance was on the moors of Perthshire in central Scotland – to be more precise, on Rannoch Moor. My partner and I were staying there with our first dog, at a hotel which had once been home to the engineers designing and constructing the first railway across the peatland. There was a train station not a hundred yards away from the hotel, a surreal sight on the moorland which stretched for miles in every direction, meeting the snow-covered mountains at the horizon.

It was the Gregorian New Year, just past the darkest time of the year, but we diligently walked our dog in all weathers and light conditions. Walking out into that dark-that-was-not-dark was one of the strangest experiences I had had in nature to that point. There was light, shimmering, blue-tinged, all around, yet the sky was as dark as it ever gets, the moon illuminating only its small portion of the sky. Everywhere heather and bracken and grasses were lit directly, with shadows sharp and clear, yet seemed indistinct, even when seen directly.

Since our permanent move to the country, I’ve experienced many more nights like that one. When the sky is covered in cloud, the moon’s light is diffused from horizon to horizon, and the middle of the night seems twilit. But my favourite is the years of the blue moon, when there is a calendar month with two full moons. This usually means that a full moon falls between winter solstice and the Gregorian New Year. When the whole world is white and sparkling with layer upon layer of hoar frost, the moon’s light is reflected and refracted to an almost sapphire blue.

It’s not a time to walk out alone. I’ve almost been caught before now, gazing entranced at sparkling umbelliferous heads of angelica, until I lost all track of time, and was saved from hypothermia only by a dog’s lick to my hand, and my partner pulling my attention back to the warmth and cosiness waiting indoors.

This year – like most years – as Mabon has grown nearer I have felt a growing dread at the change of season, at the coming dark. Yesterday’s harvest moon has grounded me again in the season as it is, unfolding as it must, with all its own wonders to reveal. 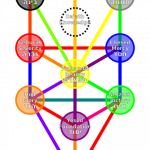 What Kind of Witch Do You...
John Beckett
Related posts from A Sense of Place