My years in Ireland were like graduate school.  They challenged my thoughts on spirituality, witchcraft, and culture.  While living outside my culture of origin, I chose to drop my identifiers and preconceived ideas.  I sought to experience my culture of residence with fresh eyes and an insider perspective.  Irish mythology and folklore have shaped much of our understanding, and practice of paganism.  The very names used for significant seasonal celebrations are influenced by Irish language and custom.  Yet what I learned about those seasons, while living on that island, forever altered my practice.  I am finally becoming naturalised–a term I first heard Steven Posch use to describe a paganism that more accurately reflects our living Place, as opposed to some far-away homeland (or fantasy of that homeland). 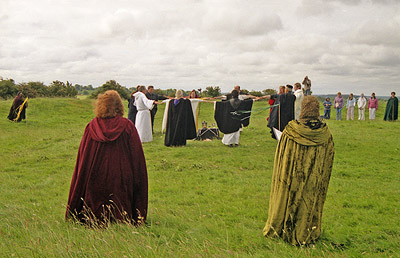 I began this journey years ago, when the knowledge that American culture is shaped by western Christianity first awoke in my consciousness.  It was the first time I questioned how my upbringing in the U.S. had shaped and informed my world-view, and how intertwined it was with the philosophy of western Christianity. Steven Posch is quoted as saying, “Much of what passes for Pagan these days is actually a bad translation into Pagan of some variety of Natal Monotheism or, worse, Pop Culture.”  Once I realised (and agreed with) this, I began to examine how my culture of origin shaped my personal experience of paganism.  In what ways was I continuing to behave and think like a monotheist? I also began to examine how this world-view shaped my government, the systems operating within my society, and the science that informs my understanding of the cosmos.  It was a profound and powerful journey.  One which decimated my entire structure of belief and perception.

The Great Stripping Away (or untangling) was ongoing when I moved across the pond to the Emerald Isle, a land I mythicized for years.  Yet,  when finally able to experientially connect with the land on a daily basis, the stories I had read with a sense of disconnection, and almost romanticized wonder, took on an unexpected immediacy; they became embodied.  I soon came to realize that the persons referenced in the ancient stories were as real as the Knockmealdown Mountains I could see from my front garden.  In fact, one or two of them actually were those strong peaks!

But seeing the landscape anthropomorphized in the stories was not enough. I began to look behind those ‘new’ tales for the Old Gods, the Elder Gods, the gods of the witches who are the Great Powers: wild, untamed, and untamable.  The far-side-of-the-hedge ones.   And, I found them!

They were wherever my eye would see or my ear hear.  Strange and frightful, yet as alive as me: each tree–Blackthorn, Oak, Ash–the strong West Wind, the River Bride.  Each with a voice, and a story of their own.  The ancestral voice, rich and deep, reverberated with remembered history. These beings are alien, so unlike human-persons that it is hard to fathom them.  Yet they hold a perspective and an experience I can not gain on my own.  As a witch, I am interested in understanding the powers of my world; as an animist, I care about living in right relationship with the other-than-human persons I share space with.  As a human-person, I want to learn about the world I inhabit.

As these changes to the way I interact with my world unfolded, I came to realize my paganism was diverging from what I saw around me.  My practice began to look less and less like what I had been taught, or what I read of ‘mainstream’ paganism.  I was moving backward on a time-stream into a more primal thought that was, nonetheless, influenced by the modernity I am part of.

That is the question I want to answer for myself.  As I prepare to return home to Texas, I also prepare to naturalize my practice.  In so doing, I may create a new tradition, a new spirituality.  One shaped by the comings and goings of Little Brother and Little Sister: he who brings rain and cold, she who brings fiery heat.  A spirituality shaped by the Wild Mother, whose winds blow fierce.  A year divided by two turnings: rich fertility that gives way to the long hot, and ancestral breath which offers cool respite.

What is the spirituality of your Place?  Have you naturalized? 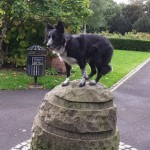 October 8, 2013
The Intersection of People and Place
Next Post 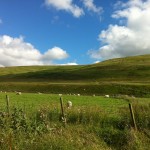 Irish-American Witchcraft: Do I Believe In...
Agora
Related posts from A Sense of Place

The Benefits of Outer Courts and Training Circles
A long outer court is a good thing. A precious thing, for...
view all Pagan blogs
What Are Your Thoughts?leave a comment
Copyright 2008-2017, Patheos. All rights reserved.