Or, the Anthropocentrism of Western Paganism

Occasionally, within pagan circles, I happen across a troubling component of the western centric world view, and one that I find particularly antithetical to pagan values: anthropocentrism.  The belief that human-persons are the most significant species on the planet, plays out within paganism in subtle and tricky ways.  Most of us would balk at the outright notion that our species is superior, yet I often hear how humans have a divine role as mediators between worlds, or even how we are tasked with saving our planet.  I don’t disagree that we do have a responsibility to live rightly and within our means; or that our species seems determined to remove itself (to our detriment) from the circle of life; or even that it is possible for us to shift our consciousness in such a way as to glimpse into other worlds.  What I heartily disagree with, however, is the subtle notion that our species is the only one listening.

This past Lughnasadh, I stayed the night in one of the Carrowkeel megalithic mounds in south county Sligo.  As I settled into the southwest recess where the Crom stone is placed, I noticed three red moths.  They were resting on the Crom stone, near to one another, with wings spread.  I went to great lengths not to disturb them, as they were there first.  As I pondered the Red Moths, I wondered why they might be visiting the monument.  They were in a dry, protected place, but so was I.   These incidental details told me nothing about their motivation for being inside the mound, anymore than my presence could be accounted for by these details.

Since all things are made of the same star stuff, I perceive all as possessing consciousness in some form. That form may be radically different from the way I perceive my own consciousness, but conceptualizing it in this way enables a starting place for relationship, and my animism is about relationality within a community of persons, both human and other-than-human.  What IF the Red Moths were there mediating between the world of the ancestors and the world of the living?   What IF the Red Moths were there praying to their own god, to intervene in the changing climate? What IF the climate doesn’t concern the Red Moths, and they were there to sing, or have a party?

Anthropocentrism creeps in when we, as pagans, view the presence of the Red Moths as somehow specifically and exclusively connected to us, as humans.  If I had seen the Red Moths as a ‘sign’ to me from Crom, I would have removed their agency and transformed them into a lesser species, whose sole purpose for being there was to send me a message.  What a load of colonizing BS that is!

I realize that saying paganism has a Messiah Complex is applying really strong language; after all, the state of mind characterized by the belief that one is exceptionally unique, with a predestined mission, is delusional, and can even be schizophrenic. But might the actions of The Human (our species as a whole) be seen as delusional, and more than a little pathological, by other species looking in at us?  After all, our record for ruining habitat, the very ecosystem we depend upon for survival, is less than sustainable.

Even though my argument is over simplified, and reductionist if taken too simplistically, it is a line of thought we ought to grapple with.  I hear too often in our conversations the same mindset we chafe against in dominant culture: one that perceives itself as superior to, and privileged over, another.  So the next time you encounter one of your neighbors, be that sister Bird, brother Wind, or cousin Tree, take a moment to consider what their world view is, and how they view you, as the strange alien moving within their sphere of life. 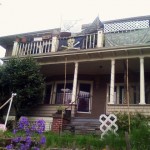 December 27, 2013
Capitalism and the Spirit of Place
Next Post 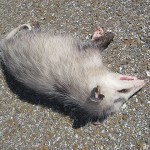