Different And The Same

Patheos Explore the world's faith through different perspectives on religion and spirituality! Patheos has the views of the prevalent religions and spiritualities of the world.
Over the past week I have been in Amsterdam, The Netherlands; Glasgow, Scotland; London, England; and now I am in Manchester, England. The rain has followed me everywhere. I can see by the news that each place has gotten sunny after I leave it, so the rain must be following me around like a lost puppy. But the rain isn’t the only thing that seems to be following me around. Lately I’ve been dogged by wisps of deja vu every where I go.

I’m not talking about the kind of deja vu where you sit around afterwards trying to figure out if this was a case of a premonition come true or just a glitch in your brain. This is not about dreams and events but rather places and familiarity. A place looks familiar, like I’ve been there before, only I’m quite certain that this is the first time I’ve been to the place in question. So then I puzzle out what it is the place reminds me of. Is this a case of similarities between disparate geographies or something else?

When I travelled to Paris in 2012 I was quite convinced that the sense of familiarity I had with that place was something more than just similarities to other places I’ve been. I’m still certain that my Paris experience was unique in my life. The way I knew that city, navigated it without map or guidebook at least as well as I would do in the city where I grew up, was seriously bizarre. I’m not talking about that kind of experience.

These sparks of familiarity are smaller. A building on a corner that I’m sure I’ve seen before. A park that feels exactly like a place I took my children when they were young. A set of shops that I’m sure are in exactly the same configuration somewhere else I’ve been.

Some of this might be chalked up to movie magic. Movies, TV shows and even music videos get made in many places, scooping up the street views of locations with no name and no context. The brain files the information away, and then suddenly you see an image you saw on a screen before and a synapse fires to tell you that you’ve already got a mental file with this image.

A portion of the experience may be due to copying across locations: Developers with international ties build nearly the same thing in several places. Other developers may simply copy a pattern that they liked on their vacation. Immigrants throughout US history have copied place names, building styles, and other more subtle aspects of their former homes as they built their new lives in America. The New World is not the only place with copy-cat developments or urban styles repeated across many cities, though, and I find myself frequently surprised by how many places in the UK I can find houses that look exactly like the one where I lived in Maidenhead, England back in the early 00’s.

There are business travellers who say that after a while it all just blends together. All hotels are one hotel. All the streets are just different versions of some theoretical street. No matter where you are in the world, buildings are just boxes where people avoid the elements while they work or sleep. For some the sameness becomes a form of disenchantment.

I feel like there is some hint in the sameness, some spiritual truth, if you will. This may just be a rehash of the old, “We are all One” meme, but it rings true. Where ever you go, there are familiar sights and sounds right alongside the unfamiliar ones, and the more you collect experiences, the more familiar ones you find at every corner. 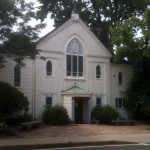