The land is finally waking, here in the cold north (aka Scotland). Ostara is the balance of day and night, as elsewhere, but the land does not really wake until Beltane — also known as Beltaine, or Bealtuinn.

Spring and summer come upon us all of a piece, here. Here and now, the oyster catchers nest, the swallows arrive, the curlews warble, yet the sycamore is still bare-limbed. Daffodils and celandines and coltsfoot and wood anemones all bloom together.

Beltane is not, here, a time of courting your lover in the woods all night and bringing back boughs of May blossom. The hawthorn – the May – will not show its flowers here until June. (And besides, it’s usually too cold for naked, outdoor, nighttime romping.) No, the blossoming thorn here, at this season, is the blackthorn.

The blackthorn is often seen as a tree of ill omen. Its name in the tree Ogham is straif, which translates as ‘strife’. Its long and wicked thorns can be used in hexes and curses, and were thought in times gone by to be used by the Devil to mark his followers. Witches were traditionally said to carry a blackthorn staff, with which they could cast the evil eye. It is supposedly unlucky to cut blackthorn wood — especially after Samhain.

However, its wood is dense and strong, making it perfect for a formidable, protective (or aggressive) club, or a sturdy walking stick. Its fruit, the sloe, can be used to make a dye as red as lifeblood, and once the first autumn frosts have bitten into it, it can be turned into the infamous and delicious sloe gin.

Blackthorn: Queen of Winter and of Summer

The blackthorn is associated in Scottish lore with the Cailleach, or Carlin, the Queen of Winter. To bring winter upon the land, she strikes the ground with her blackthorn staff. Yet its blossoms mark the (beginning of the) end of winter.

But this is not such a hard paradox to unravel.

The time around Beltane is when Bride, the Queen of Summer, attains her escape from the Cailleach’s winter imprisonment, with the assistance of Angus, the bright shining sun. Bride finally dons her blue mantle, the sky, and her touch brings greening and blooming to the land. Her touch melts the final ice and frosts, and she and Angus, the earth and the sun, celebrate their marriage in the greenwood.

The Cailleach and Bride can be seen as two sides of the same coin: winter and summer, grey skies and blue, old and young, cold and hot, shrivelled and flowering, wood and blossom.

This is, of course, all Unverified Personal Gnosis. This is what I have learned, absorbed and interpreted from how this land, this lore, and this lifeform have touched me. Another person in the same place and time may reach other conclusions, make other meanings. We must all interpret the land and its lore and its lifeforms by our lights.

And in another year, when the blackthorn blossoms earlier, or the winter continues later — when the seasons wear different faces — I may reach other conclusions and make other meanings myself.  The land is ever-changing, and the stories woven into it change their meaning accordingly.

But in this year, in this season, as this Beltane approaches, I am captivated by the blackthorn and its richness of meaning, as the musky scent of its blossoms rises on the warming air. 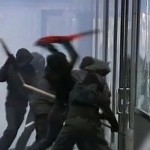 April 25, 2014
Dionysos in a Paving Stone, Brighid in the Broken Glass
Next Post

Pagan
Earth Day: A Moment to Celebrate
A Sense of Place
TRENDING AT PATHEOS Pagan