Finding Identity In The Directions

I stood outside on the balcony at my friend’s apartment, facing North. I began to sing a wordless tune, a devekut niggun. I pulled all the contents out of a little red bag that had once held a bottle of wine, probably as a gift from one person to another, but that now holds my pipe. A roll of green cloth. A bag of tobacco. A book of matches. I put each of these things on a chair, the only flat surface available to serve as an altar of sorts in this spot. I unrolled the green cloth carefully on the chair, revealing the wooden pipe stem and finally the carved catlinite bowl.

The man who made this pipe for me a few years ago knew that I already had a practice with tobacco and a pipe. He didn’t know that I was about to give him my previous pipe for safekeeping while I travelled, and I didn’t know that he was about to give me this pipe and some other things to keep me safe on my way. “This pipe is different from the one you are used to.” He explained, “You keep the pieces separate. When you put the pieces together with honor and intent, you create the World.”

I picked up the pipe bowl in my left hand and the stem in my right. I heard the words that I was taught in my head and pictured a World that was this one, but not quite — an imagined place that held my prayers and the answers to my questions in it. With a push and a twist, the bowl and the stem were unified. The pipe was whole and I imagined that the World where the prayers and answers were had overlaid the ordinary World, and for now they were One.

I began to sing a song with ancient words and a new melody that was given to me in 2001.

When the song was finished, I picked up a pinch of tobacco and offered it to the North. I stood there for quite some time, thinking about Who was in the North, and Where the North is. Standing, as I was in the very place I think of when I call to the North from Seattle, my sense of things was shaken.

“Oh, hi, North! It’s so good to be here. But I need to call you in, not as ‘Here’ but as really, really North. How do I do that? The polar bears are even further North than here. I invite them in. The mountains and trees are North of me now. I invite you in, as well. Please, come share this time with me as I pray.” 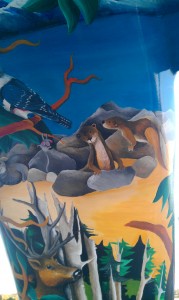 I picked up another pinch of tobacco and turned to the East. The East is still East, but the Land is different here. There are cow pastures out that way. And what else? They speak French out that way, if you go far enough. What birds soar through the air out there? Eagles and hawks and crows and skinny black birds with red beaks I don’t know the name of. I spoke to the East and all the energies I could sense out that way and invited them to stay with me while I pray.

Another pinch of tobacco and I faced South. Mexico is way down there, but the energy just South of here is the United States. Oh, feel that, Seattle is South of here, and then Oregon and California. This isn’t the energy of Arizona fire. But there are lizards and turtles and bugs of the South. How strange! I never thought of turtles when I think of the South! I spoke to the South and all the energies I could sense down there and invited them to stay with me while I pray.

Facing West, I picked up another pinch of tobacco. Silence. Wait. What’s going on here? “You are at the end of the World.” No I’m not! The Pacific Ocean is out there! There are whales and orca and sea otters and salmon out there! “No. The city is between you and the Ocean.” The city is between me and the Sound when I’m in Seattle! “This isn’t Seattle. You need to recognize the city.” Can I still ask the orca and the octopus and the whales and the sea otters and the salmon in? “If you must.” A pause. “Yes. They are in the West, too. Go ahead. But don’t forget the houses.”

So I did. Then some tobacco went to the wind and some into the pipe.

I dropped some tobacco on the floor of the balcony, imagining a line that went straight down to the Earth. “Pachamama, Mother Earth, thank you for your strength. Thank you for holding me up. Thank you for making me whole each day with the atoms from your own soil, through the plants I eat and from your own air that I breathe. Please keep me safe and give me guidance as I pray.” (Why is she Pachamama to me? I’ve never been south of El Salvador, much less to Peru, but she has been Pachamama to me as long as I can remember.) 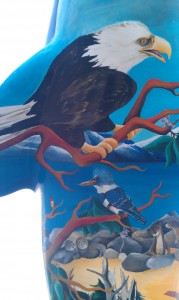 I raised the pipe to the sky, “Father Sky, thank you for covering me, for holding me in your embrace.” I thought for a moment of the changing nature of the sky, that I think of as both Father and Mother, especially in the guise of Nut at night, but whose spirit I always speak to as Father Sky in the pipe ceremony. “Please keep me safe and give me guidance as I pray.”

I held the pipe in front of me, at the level of my heart, and recognized the Center of All Things. There is a place where there are No Directions, and yet from that place spring All Directions.

I lit the pipe, took the first puff, and began to pray. 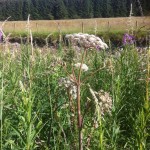 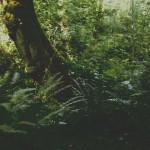 August 22, 2014 Missing The Forest
Recent Comments
0 | Leave a Comment
Browse Our Archives
get the latest from
Pagan
Sign up for our newsletter
POPULAR AT PATHEOS Pagan
1