Your Home Has Been Stolen

This is home, the place where you were born and raised, the place where you met your spouse, gave birth to your children. This is where you work, where you eat and where you sleep. This is where you meet with your friends and relatives. You know the weather patterns here. You know when the fish come up the stream. You know when the berries are ripe and when the root vegetables are ready to be dug up. Your family has stories about how they came to this place a long time ago, but those stories are so old that they are more like myths than legends now. Not all the people in those stories are human, and that doesn’t seem odd to you. Not one bit.

But then some strangers came. They built some houses, cleared some land, moved their strange animals into enclosures where a stand of salal bushes had been before. They blocked the path to the river. They took more salmon than they could possibly eat. They killed the bears for no good reason. (They say it’s because the bears are dangerous. Of course the bears are dangerous, but so are you!)

We knew about these strangers long before they arrived. We’d heard stories about how they come through a place and take all the land, moving everyone who had lived there before off to new places they call “reservations”. We thought, for a moment, that we might find another way to live with these people. We thought that maybe we could work with them, convince them that there was plenty of room for all of us. Maybe they could learn to live as neighbors. But they didn’t know how to be neighbors. They only knew how to take what they wanted.

The story of stolen land is not unique to the United States or even to the Americas. Neither are the victims of colonialism only those who live in what we now call “less developed nations”. The British enclosure movement robbed entire communities of their living and the Highland Clearances forced families off their ancestral lands.

The only way that one group of people can be so callous and vicious to another group of people is when they believe that the victimized group is less important — less human, even — than the group that is taking everything for themselves. Sometimes we consider the other less important because of the color of their skin. Sometimes it’s that they follow a different religion, or even a different preacher than we do. Sometimes it’s good enough to hear the other person’s accent to know that they are not as good as we who speak properly are.

I was born on stolen land, land of the Muwekma Ohlone in what is now called Oakland, California. I was the fourth generation (that we know) of European-descended women born on that stolen land. My daughter was the fifth. Today I live on another piece of stolen land, only now it is the Duwamish whose lives are diminished so that mine can be more comfortable.

When I was growing up, the native people of the land where I lived were invisible to me. They were represented by museum displays as curiosities of the past. They were described as a subject for study by archaeologists. I never even realized that there were still Ohlone people living in the area. I never knew that there were still people who spoke the old language, ate acorn cakes, and went to public schools just miles away from my school. I had no idea that these people had been systematically erased from conciousness, or that their tribe which had once been unambiguously recognized had been dropped off the Federal register and was working to be recognized once again. I was none the wiser when the tribe gained recognition once again in 2000.

How ironic, then, to realize that here in Seattle the presence of the native population is not just acknowledged, but celebrated. The art in this area is often influenced by native styles and themes. There are public celebrations of the Salmon Homecoming each year. The city takes its name from the Duwamish chief who signed the Treaty of Point Elliot in 1855, a treaty which promised reservation land to the people who were being displaced by the white immigrants who were taking village land, hunting ground and fishing rights for themselves. In fact, the descendants of Chief Seattle’s people are here amongst us, but they never got their reservation and their tribe was never recognized.

There is a movie about the life of Chief Seattle’s daughter, Kikisoblu, called Princess Angeline by her employer, Catherine Broshears Maynard. It tells the story of the migration of the white men into the Seattle area. It tells how the land was taken illegally, and then a treaty was created after the fact. It tells how the promises of the treaty were broken, and how the Duwamish tribe ended up without a place of their own. I urge you to seek it out and watch it. I urge you to read the histories and to know what has happened here.

We are complicit in these crimes against humanity, even though we feel as if there is nothing that we can do about them. Simply breathing this air, drinking this water, claiming a building as my home on this land (even if I only rent and do not claim to “own” any thing”), these are all the acts of an accessory after the fact. I am receiving benefit from the theft of this land, and the people from whom it was stolen have not been provided with proper restitution.

My own words are dull, a thud against a loose drum, compared to the words of the people who are truly affected by this ongoing injustice. Please listen to the words of Jewell James, descendant of Chief Seattle, and please reach out and support the tribe. 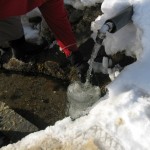 March 16, 2015 You are a slave to your cultural norms
Recent Comments
0 | Leave a Comment
Browse Our Archives
Related posts from A Sense of Place