What is a witch? 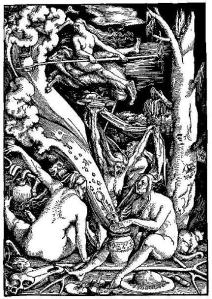 For about a thousand years the witch has been drawn as an ugly, old woman, in league with the devil, living on the outskirts of a village, waiting to take advantage of the virtuous and/or small children. She flies on her broomstick and gathers with others under the full moon to do terrible rituals. Later, she acquired an outfit of black and a pointy hat. The Halloween stereotypes we associate with witches are not new; they are deeply embedded in the Western mythos.

None of these things are ‘true.’ Many of the images of the witch come from Roman Catholic Inquisition records (not likely to be trust worthy sources). The women (and a few men) were mostly on the outskirts of society and easily disposed of. Some of the elements are based on actual things witches did; all stereotypes are based on some element of truth. But this post isn’t about the historical image of the witch, although, that is a fascinating subject. That topic is the macro-social lens. Assuming we think witches are real and are not cartoon characters, what is a witch on a micro-personal level?

I’ve been thinking about this topic a lot lately. Two very wise women have written on this topic, Ms Lawless at The Witch of Forest Grove and Ms Kunning at Witch Mom. I recommend their posts. I’ve decided to throw my thoughts into the mix as well.

I agree with both of the above writers that a witch is essentially the European equivalent of a shaman. A witch isn’t someone who just wants the label. A witch isn’t someone who casts a circle or picks herbs or reads tarot. I do all of those things and I’m not a witch. (Nor is a witch some one who wears all black or freaks people out – I do those too sometimes.) A witch is a label for someone who has mastered a set of skills and has established communication with the Gods and/or the Dead. I think the second half of that job description is the most important!

And now for the crazy talk.

I believe I am called, in some way, by something. Called by which gods, I have yet to figure out. Called to what, specifically, that too I am unsure of, but called… yes. For several years a couple of people have jokingly poked me, telling me that I need to start my own religion or church (is my own ashram not enough?!). I don’t think they mean that literally, instead they are focusing on the ministerial qualities that I possess. But minister to whom? In what context? I am working out my path, untangling it from the Christian strictures that bound me and my understanding for so long. I believe that the mountains and waterways and forests of SE Alaska nurtured me and sent me forth. To what and to whom I still don’t know. This project is helping me unravel my past tapestry and weave together something new.

I’m not sure if I’m called to be a witch; I’m certainly not one now, even though I have some of the skills. I want to learn though. Even if I never become a Witch, with a capital W, the skills developed along the way are priceless: storytelling; ministering; listening: within and without; observing: self, others, nature, animals; healing; spell craft; performing ritual; music in forms of song and chant and drumming; herbal, plant, and animal lore; astronomy…. the list could go on and on. But, while I might be guided, shown better techniques, even have my hand-held, in the end only I can receive the Gods and communicate with them – or I can’t.

I wonder sometimes if my entire discourse around the gods isn’t overly influenced with a pseudo-democracy imported from a Protestant Christianity. Shouldn’t we all have equal access to the Gods? Hierarchy is bad. Shouldn’t we all have a ‘personal relationship’ with a god? I’m not sure we do all have a personal relationship with our gods, nor am I convinced it’s even necessary. I know that I crave that – I crave that. I’ve always been weird this way. The mystic in me wants nothing more than to reach out (or reach within) and touch Something Greater. But I question this desire now. Is this a hold-over from my days within Christianity? Is this a manifestation of feeling unworthy, that I might need to be spiritual justified by something external?

Those are important questions. But they’re not as important to me as the realization that the gods are real. If they choose to choose me or speak to me, then I am willing. If they choose not too, then I’m going to keep on doing what I’m doing for fruits of my labors is proof enough that my work is worthwhile.

I believe that I am honing my vessel with the work. This work is choppy, stop-start, stop-start. I can’t imagine that it could be any other way as a parent of such young children. Once this project comes to completion next year (yeah, right) I have thought about pursuing a teacher and/or a guru. ‘When the student is ready, the teacher will appear.’ Perhaps also when the witch is ready, the Gods will appear.

November 12, 2011 Enough already!
Recent Comments
0 | Leave a Comment
Browse Our Archives
get the latest from
Pagan
Sign up for our newsletter
POPULAR AT PATHEOS Pagan
1

WitchCraft Cocktails: Persephone's Descent
Through the Grapevine
Related posts from A Witch's Ashram 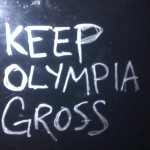 The Death of RGB and Mourning Strangers
Today, I will long for the moments when I did not know,...
view all Pagan blogs
What Are Your Thoughts?leave a comment
Copyright 2008-2020, Patheos. All rights reserved.