Being Called While Young

“What I never saw talked about, in books, in blogs, was what it means to be called as a young person. See, I thought it was Grand, it was Good. I was called young, that meant I could do a lot! But what it really meant was that I gave up dreams that everyone dreams. I’d replaced them with visions of holy fire and new myths.”

Aine Llewellyn, former Patheos blogger, wrote this on her Facebook page recently. Aine is hard at work developing a new tradition, the Otherfaith. I admire her work a great deal. I find it ambitious and passionate. This paragraph threw me in a reverie and got me thinking. Here’s where I utter the famed old fogey words. When I was her age…..

When I was her age, 21, I too sought a calling. I longed to be called. I think I was called. I remember sitting in a cafe at my university, having one-on-one time with my bible study leader. She was the women’s mentor in one of the youth group thingies I was a part of for a year or two. I told her I thought God had something big planned for me. I never got the sense that it was conventional ministry or anything. I couldn’t put my finger on it. But that call was there, in the back of my head, constantly nagging.

True confession time: At 21 I went to Ireland for six months to attend a Discipleship Training School through the Youth With A Mission program (YWAM). It was everything I hated and everything I longed for. The main agenda of YWAM is to train up young, energetic people to spread the Gospel. Most programs trained people in one location for 3 months, then sent them into developing nations for another 3 to somehow minister to people who hadn’t yet heard the words of Christ or whatever. I had a lot of problems with this model – and I still do, for basically all of the same reasons. Who are we as privileged Westerners do go in to communities for less than 3 months and tell people they need Jesus? I have always thought it rude and irresponsible to ‘save’ people and then leave. It’s a facile faith that is sown.

But I wanted camaraderie, I wanted a change, I wanted something to help me clarify the call I thought I was hearing. I chose the Ireland mission for three reasons: It was performing arts based. It was in Ireland, and I’d had a strong pull there despite my only known Irish connection being a man from Kilkenny (I think) sent to Australia as a convict in the late 18th century. The program was designed to support existing church structures in Ireland. My time in Ireland was amazing and wonderful. My time with YWAM was complicated and uncomfortable; we weren’t a good fit for all the reasons I’m not a good fit for Christianity. My lack of upbringing in and commitment to Christian culture was an awkward barrier to developing deeper relationships with my fellow students.

I was equally attracted to and repelled by many of the things I experienced at YWAM: the visions, laying on of hands, and ecstatic worship that is a substantial part of evangelical Christianity. Maybe in a different context these things wouldn’t have felt so foreign. It’s hard to say. Visions, healing, prayer, sacrifice, ecstatic worship, meditative prayer and reading of scriptures, these things are all found in various Paganisms too. They make more sense to me now in a polytheist context in a way they didn’t then. At the time I was trying to fit my calling into a Christian box and it didn’t fit.

While in Ireland I continued to feel the call. I heard the voice of God, actually quite literally on one occasion. I felt the Land of Ireland. But my experiences did not fit into what I supposed to be learning and experiencing. I wish I had known then what I know now. I wish I could have accepted my ambitions as they were. Instead, I felt a bit like a failure for not wanting what good Christians were supposed to want (to serve Jesus all the time, to be a certain type of woman, and so on). Back home, after DTS, I felt like a bit of a failure for not wanting the standard things middle class people were supposed to want. I never wanted to be a lawyer or a doctor or a high school history teacher. I was aware that I wasn’t supposed to be ‘conventional,’ but did that mean being a missionary, an evangelical? Could I be a feminist (a concept I was just discovering in my early 20s)? I wanted a god calling. And I think I was being called, I just had no vocabulary for it.

My time in Ireland was not a waste. Not by any stretch of the imagination. I learned a metric ton about myself. I met wonderful people. Many of them remain conservative Christians and we’re not a good fit for friendship anymore, but I still think of them fondly. Some of them remain among people I respect the most, doing incredible spiritual and personal work. I learned about Ireland. And it was on this program where I met the Blessed Virgin. A fellow student,  a beautiful Czech woman, was a devout Catholic and devoted to Mary. I suppose it’s her I have to thank for the next ten years of my life, spiritually and academically. (Thank you, Jana.) I learned about pilgrimages from her, too. I hiked part of the way up Crough Patrick with her, as she hiked it barefoot to the top as an offering to the Blessed Virgin. 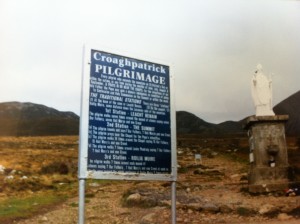 One of my few regrets in life is that I did not stay longer. I wanted to stay on for another six months and move to the YWAM base in western Ireland. Instead, I went back to the US to finish school and get married – neither of which went according to plan; my life and my mental health fell apart. I am tempted to look back and see it as a sign that I ignored my calling and the steps toward it.

I think confusion is part of the problem of being called as a young person. Unless you are called to something that has a clear path or supports and advisers (and have access to them), it can feel like you’re swimming upstream, alone at best; at worst, it can feel like you are going crazy. Which isn’t too far off from just being young in general!

What became of my calling? I’m still working that out. But as we’ll see in my next post, hearing the call, hearing and discerning the voice of the gods, is difficult to do.

July 7, 2014
A Polytheist Twist on Narrative Theology
Next Post

July 14, 2014 Magic and Community in the Pacific Northwest
Recent Comments
1 Comment | Leave a Comment
Browse Our Archives
get the latest from
Pagan
Sign up for our newsletter
POPULAR AT PATHEOS Pagan
1