Why Polytheist Spaces Are Important

I love the religions of the world. If you read this blog, you know that I write a lot about Christianity. I’ve got a big ol’ soft spot in my heart for wisdom where ever I find it. The optimist in me wants a world where our differences give us accent, but don’t overwhelm us to the point where we can’t talk together. I like the Big Umbrella aspect of Pantheacon, where various Pagan communities come together and mingle, work, explore, and share.

But spaces for each type of group are equally important. Attending Pantheacon this year made that clear to me. At a private gathering late on Saturday night an academic friend of mine was trying to talk about polytheism to myself and a certain Druid punk anarchist poet. I know the academic personally and knew what she was trying to work out. Her words weren’t graceful and the Druid got angry. What had she said, my friend asked. Well, you invalidated the entirety of his experience, with one sentence.

The scholar and the Druid managed to work out their misunderstandings. Oh, what listening and speaking calmly can do! But I was reminded that this is exactly why people need spaces where we don’t have to parse definitions, where we don’t have to explain or defend our experiences. It’s important to be able to talk about polytheisms with out the language of they/them, but rather as we/us.

Polytheism may be a Western monotheist construct, but for those of us in the West it’s a generally useful terminology. What I hope for us is that polytheists can remember that many people, particularly cultures and traditions outside the white Western world, might fit the Western definition of polytheist but might not view themselves as such. We need to let others define themselves as they will, but for those that want to talk about gods plural and gods as real, polytheism -broadly defined- creates that space.

I know the vocal polytheisms visible online can appear alienating to some. Some of the voices are strident. This is why I wish River Devora and Anomalous Thracian’s discussion on polytheism at last weekend’s Pantheacon hadn’t been held in the last possible slot on Monday afternoon. Their many points and tone highlighted the best of the Polytheist movement. Below are the points I took away from their discussion.

Gods and people exist in a context of time, place, people groups, and relationships. Polytheisms are living traditions. Where are we as individuals situated in our traditions? What are our connections to our traditions and lineages? To the lands we live on? To the larger context of our historical time and place?

Because we are in relationship we can learn from others, in this time and in other times. We can pool our resources and our voices to press the gods for change. We can learn from one another. What do other devotees experience? How do others relate to these gods and spirits? These questions are particularly important if we do not live in the lands that are originally connected with our gods or among their peoples. 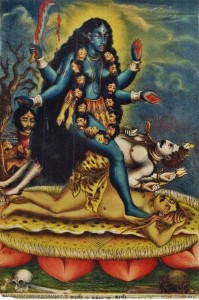 Everything comes back to relationship.

Ideally our various communities in the wider Pagan umbrella can create webs of relationship too, webs that strengthen our practices, care for one another, teach and support in various ways. But sometimes its nice to be among people that share similar definitions, certain aspects of practice, and won’t call you crazy when you say that the gods are speaking.

This is why I am proud to be co-chairing Many Gods West this summer. Come and join us in rituals, dialog and discussions, relationship and community building.

March 3, 2015 Pantheacon Rituals are a Blessing
Recent Comments
51 Comments | Leave a Comment
"Did you ever read about St. Seraphim of Sarov? He is an Orthodox saint who ..."
stonecold What I Miss About Being A ..."
"Contemplation is a good beginning... Introspect, contemplate, initiate and once you find what you seek... ..."
Gourish Bakhshi Shiva the Witch God
"Wiccans can be polytheists too! Jason Mankey deftly proved this at last year's MGW. You ..."
A Witch's Ashram Many Gods West 2016
"Congratulations! I'm glad to hear this will continue. If you'll have a Wiccan among you, ..."
Sable Aradia Many Gods West 2016
Browse Our Archives
get the latest from
Pagan
Sign up for our newsletter
POPULAR AT PATHEOS Pagan
1

An’ it Harm None, Do What...
Beneath the Moon
Related posts from A Witch's Ashram