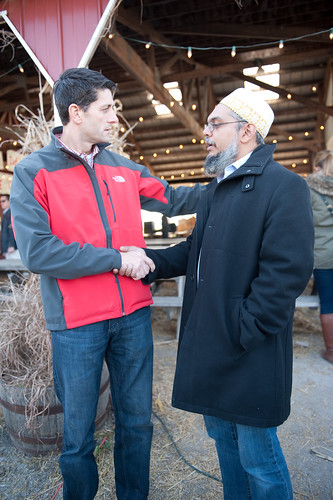 Last week, I met Paul Ryan at an apple farm.

I was attending a kids’ birthday party with my family at the Apple Holler farm in Sturtevant WI when Representative Ryan stopped by with his entourage for a visit and photo-op. Though the majority of the folks didn’t really seem to take notice, there were plenty of people interested in seeing Ryan and shaking his hand, getting a photo, etc. So, I decided I’d do the same.

All of the folk at the birthday party were Muslim Americans like myself, and pretty much everyone had the same reaction: “Why do you want to meet him?” My philosophy though is that a politician who has a chance to shape policy is a politician who must be engaged with, regardless of my differences with his specific policies, and especially in spite of the vitriolic and racist stance of his party’s mainstream. After all, there is a very solid chance that Paul Ryan will be the next Vice-President of the United States. And if so, he might even be President someday. He needs to see and meet Muslim Americans, especially thoroughly ordinary ones like myself, so that as he traverses the corridors of power in Washington, he has something/someone real to compare against the cartoon that his fellow Republicans have constructed about our community.

So, I went up to him. I was wearing my traditional topi headcap and I have a fair amount of beard on me, so it was rather obvious that I was Muslim. Ryan was shaking hands and taking photos with people, and ahead of me were three college-age girls who chattered excitedly about him. When he saw me, he quickly forgot about the coeds and welcomed me with a smile and a handshake. I told him I was an American Muslim and he asked where my mosque was; I told him I was a member of the Dawoodi Bohra community and our closest masjid was in Willowbrook IL. He said he had heard of my community and asked where I lived, and I told him Madison – to his credit, his smile didn’t waver 🙂 I told him I visit Chicago on weekends to visit my parents and then I invited him to visit our mosque, which he appreciated. After a few quick photos, I wished him the best of luck with his campaign.

And that was about it. It was a short and pleasant conversation, one in which I was very identifiably Muslim and also very polite, friendly, and approachable. That was my objective. Despite some of the urging of my friends, I had no interest in accusing him or critiquing him. The “angry muslim” is a stereotype analogous to the “angry black man” – it drains your credibility and reduces you to a caricature. I wanted Representative Ryan’s memory of our encounter to be positive, because like it or not, in that moment I didn’t just represent myself, but my Bohra community, the Muslim American community as a whole, and in fact probably Muslims and Islam in general. Of course I am not remotely qualified to be such a representative. It’s a heavy and completely overwhelming burden but it was also an opportunity that I had to take.

After the fact, I do regret not raising certain issues though. What I should have asked of Ryan was simply, “Congressman, I have a request. Given your record and advocacy of civil liberties and freedom, please do look into the NYPD spying against Muslim Americans.” I might also have said, “Please do use whatever authority you have as a Congressman to exert some oversight over the Administration’s drone policy in Pakistan and Afghanistan.” Although I am a supporter of Barack Obama in this election, this is pressure that needs to be exerted.

These are issues that were conspicuously absent during the VP debate a few days later between Ryan and sitting-veep Joe Biden, and might have made an appearance (even in the form of an attack) had I managed to raise them in Ryan’s consciousness ahead of time. We are all the worse off for it. I have no excuse other than I was simply unprepared; but that is part of why I am writing this post. 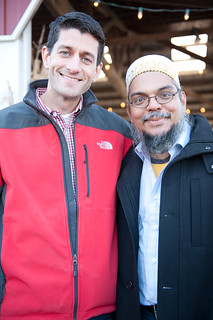 I think it is critically important for all Muslim Americans to be engaged in the process and to exploit these opportunities to promote ourselves as we see ourselves, rather than as how those who hate us see us. I encourage every Muslim American to think of at least one thing you’d say (respectfully!) to Romney, Obama, Ryan, Biden, or any other politician who has any real prominence of any kind.

Admittedly, the vast majority of us will never meet a politician in this way. Barack Obama even visited Madison a couple weeks ago,but I couldn’t go see him due to family commitments and Real Life. However, you simply never know. Especially if you live in a swing state or the Upper Midwest.

Be. Prepared. Engage. This is how we make a difference. This is the obligation upon all of us.