Ayaan Hirsi Ali is an Islamophobe who hates all muslims 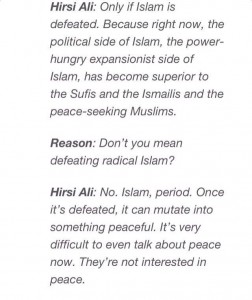 Ayaan Hirsi Ali is a brave woman and I respect her intellectual decision to leave religion (not just Islam – she’s an atheist) even though I disagree with it. But she has allowed the tragic events of her youth to poison her view of her fellow human beings. Her criticism of Islam is to deny that the majority of Muslims are normal people and its only a fringe group of radicals who are responsible for violence – she has actually stated baldly that Islam is the “new fascism” and:

“Violence is inherent in Islam – it’s a destructive, nihilistic cult of death. It legitimates murder.”

That’s no different from profiting Islamophobes like Robert Spencer or Pamela Geller.

Another blogger here at Patheos, Michael Stone, believes that this is a “fair criticism” of Islam.

Stone’s blog is titled “progressive secular humanist” – but labeling one billion people as robotic murderous orcs is neither progressive nor humanist. Unfortunately, secularism as an ideology is both overtly and explicitly hostile to spirituality and facilitates the kind of dehumanization that characterizes the views* of Ayaan Hirsi Ali towards Muslims.

Incidentally, Ayaan Hirsi Ali’s response to being denied an honorary degree at Brandeis University is to suggest that the university was motivated by fear of violence from offended Muslims. I suggest to Ms. Ali that she consider the fact that she no longer lives in Somalia and if she fears Muslim violence, she should be embracing the Muslim American community, which has actively worked to guarantee the safety of her person as well as all our fellow citizens from terrorist attacks.

Unfortunately she has far greater likelihood of being harmed by violence from rightwing conservative radicals than Muslims while living in the United States – the very people who exploit her for her convenient views against Islam.

As far as Brandeis University goes, I honestly don’t care if they give anyone an honorary degree or not. I’m not a student, faculty or alumnus. However, it certainly is the right of Brandeis’ students, faculty and alumni to have an opinion upon whom their university chooses to bestow a degree or not. Anyone else frankly has no right to an opinion on the matter.

* which are ironic in and of themselves, if you think about it.

UPDATE: Obaid Siddiqi also writes about Ayaan Hirsi Ali and Brandeis University at altMuslim, “Brandeis chooses not to tolerate intolerance” – and makes the great point that Hirsi Ali herself once said, “tolerance of intolerance is cowardice.” Rightly so.

June 28, 2014 there debate about moonsighting - and the validity (and ubiquity) of calculations
Recent Comments
0 | Leave a Comment
Browse Our Archives
Related posts from Aziz for America