How is Trump any worse than the “establishment” Republicans? Consider Rubio’s interview on This Week ABC, past November:

STEPHANOPOULOS: You saw Secretary Clinton there did not want to use the words “radical Islam.”

RUBIO: I think that’s — I don’t understand it. That would be like saying we weren’t at war with the Nazis, because we were afraid to offend some Germans who may have been members of the Nazi Party, but weren’t violent themselves.

Rubio’s analogy here explicitly says moderate muslims are Nazis, and jihadists are violent Nazis. Rubio did NOT say, “that’s like saying we weren’t at war with Germany, because we were afraid to offend some people who were citizens of Germany, but weren’t Nazis themselves” – which would have been a reasonable argument to make.

Rubio’s critique of Trump’s “ban Muslims” plan was only that it was unconstitutional. Also, Rubio went a step beyond Trump, on Fox News’ The Kelly File, arguing to shut down not just mosques but any place where Muslims might gather and be “radicalized”:

This makes Rubio’s critique of Trump’s plans on constitutional grounds rather ironic. After all, “Congress shall make no law respecting an establishment of religion, or prohibiting the free exercise thereof; or abridging the freedom of speech, or of the press; or the right of the people peaceably to assemble.”

… unless that religion is Islam, or that speech or assembly is by Muslims. Rubio goes far further than Trump. 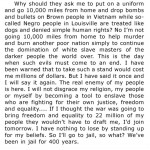 June 4, 2016 Muhammad Ali's jihad
Recent Comments
0 | Leave a Comment
Browse Our Archives
get the latest from
Muslim
Sign up for our newsletter
POPULAR AT PATHEOS Muslim
1