The outcome of the 2016 election was a coin-toss, dictated by margins of only 10,000 votes in a handful of counties in a few rust belt states, despite a historically-high margin of victory in the popular vote. I am no proponent of the National Popular Vote or abolishing the electoral college entirely, because these solutions are still first-past-the-post. However, electoral strategy, not electoral mechanics, are more important. What is necessary for the sake of our democracy and our nation is to build a voting coalition like Reagan’s or Obama’s that is robust enough to moot the razor-margin realm where the EC becomes a spoiling factor. That coalition won’t be liberal or conservative; we have outgrown those late 20th century ideas.

The significance of these numbers is better expressed through the following two graphs. The first shows us the percentages of the total population of the United States: 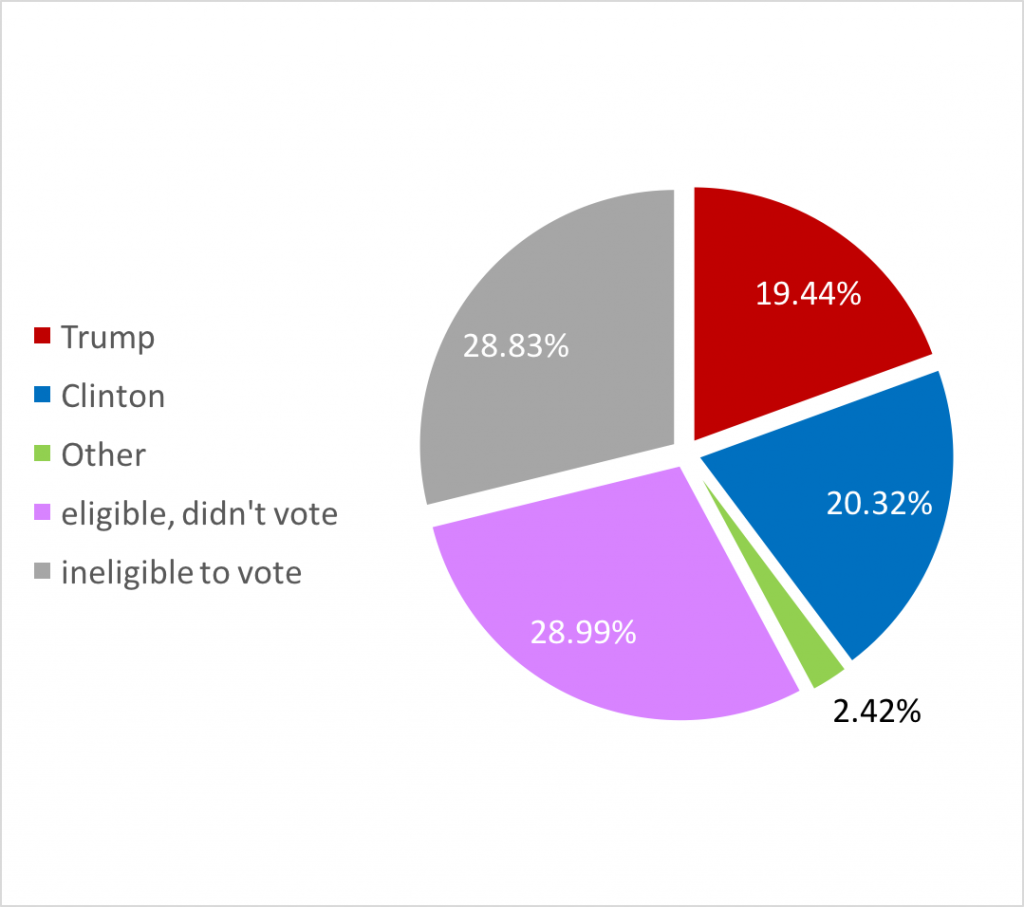 This graph is important to understand that this country did not elect Trump (or Hillary). In fact, less than 1 in 5 citizens in the US supported him. Of course, that number includes the ineligible voting population (children, felons, non-citizens, etc.). So the more important graph of the above data is as a percentage of the eligible voters: 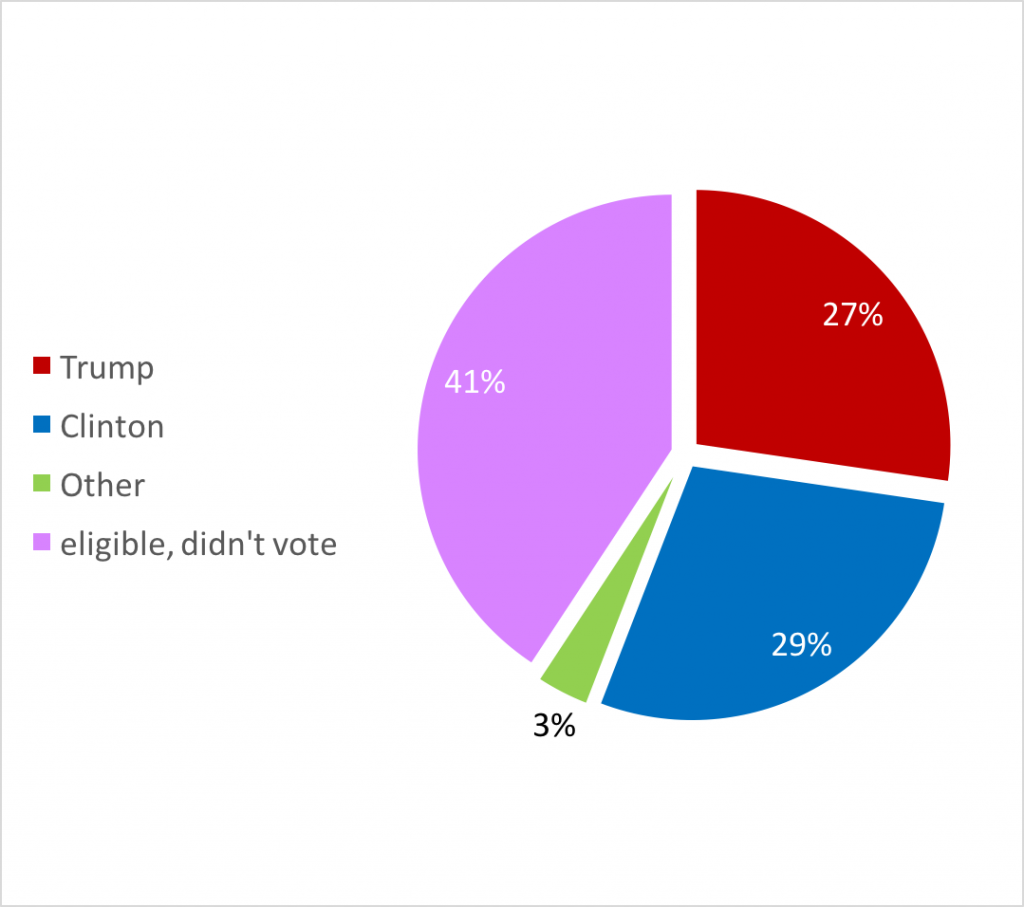 The significance of this data is simple: to win an election, there are only 4 pools of eligible votes available. Let’s assume the POV of the Democrats, but the argument is identical for the Republicans: your support in 2016 was less than 30% of eligible voters. Which of the remaining pools are your best target for more votes? Keep in mind that the GOP is trying to do the same thing. Does it make sense to fight over that tiny green sliver of Other votes? or poach a fraction of voters from the red? Keep in mind that roughly half of the red pool are outright hostile to the values and policy priorities of the blue pool.

What did the numbers look like for Obama in 2008? Here’s the graph: 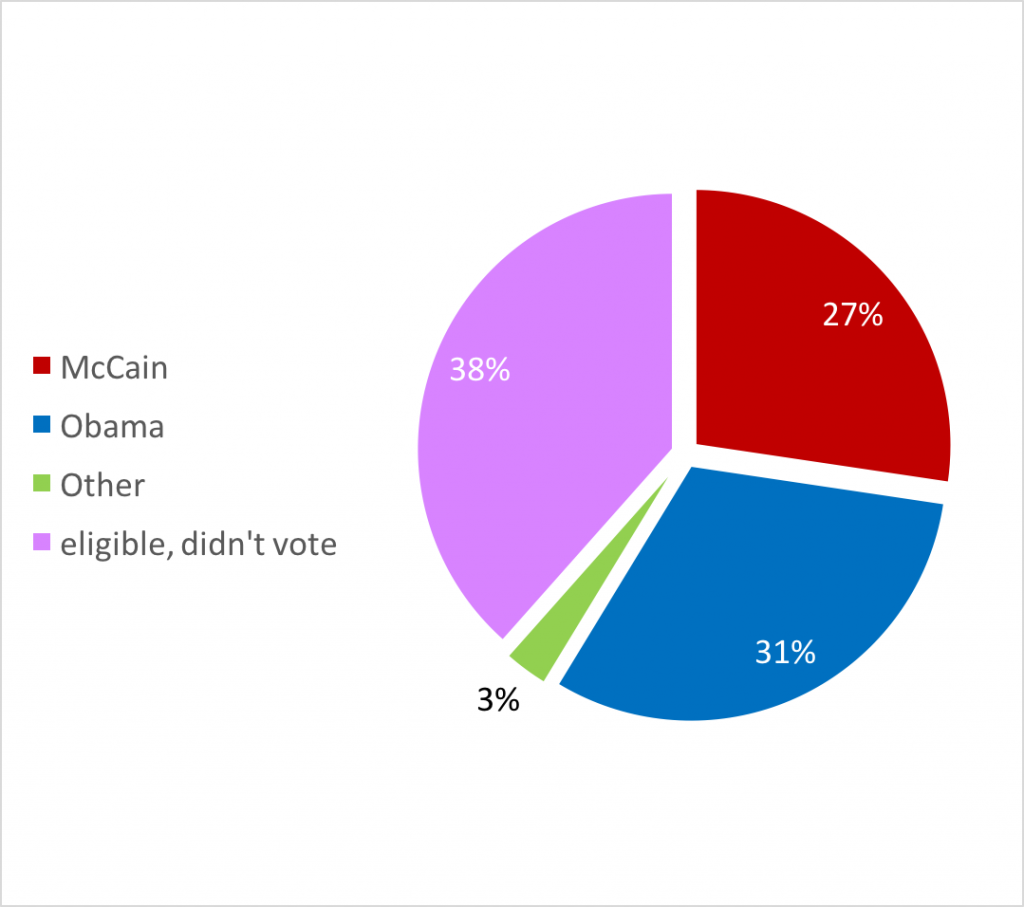 When visualized this way, you can see that Obama’s victory wasn’t nearly as broad based as the electoral college outcome made it seem. Obama recruited a few percent of the purple non-voters to his cause, and that was enough, because those voters were in the right place – specifically, a few rust belt states.

No one has really tried to persuade the purple pool to join in our democracy. That means that our election doesn’t represent them – the plurality of eligible voters who didn’t vote for Hillary or Trump or McCain or Romney or Obama or Bush or Kerry or Gore.

Articulating a platform that can attract 5%, or 10% of the purple pool is how you win, not on a technicality, but with a true mandate of representing the true majority.

What would such a purple platform look like? That’s the answer that both sides need to be asking. The answer is likely to be in the realm of policy rather than identity. What do Americans fundamentally want? They want the Dream: that you can come here from anywhere, work hard, and succeed. The promise that you will be rewarded for your effort and you will thrive, not just survive.

And of course I do believe that the Left is better positioned to answer than the right – the right is able to articulate the problem very eloquently, but in the end they have no new ideas beyond 1. tax cuts for the rich, 2. spend money on war rather than peace, and 3. cater to their Chosen demographic. But the Left by its very nature has two advantages: it naturally seeks to build an inclusionary coalition, and it believes that government can be of the people, for the people, by the people instead of an enemy to be drowned in the bathtub. It just requires a matter of political will. Ironically, Bernie’s defeat and Trump’s rise may well have sown the seed for that will, at last.

And what about electoral mechanics? That’s a topic for next time.