I have a terrible habit of writing about atheists. Every time I indulge it, the main response I get from my atheist/nontheist/bright/agnostic/agnostic-atheist/post-Christian/secular humanist brothers and sisters is not any rebuttal of argument — that would just be crude — but the complaint “these aren’t real atheists. Real atheists are much kinder, less judgmental etc. etc. You’re attacking a strawman.”

All things considered, I freely admit the complaint may be valid. But the sad reality is that I am limited in my criticism — I can only respond to how atheists act in the public sphere. What else can I comment on except what I am exposed to? If there is an atheist thinking peaceful thoughts on his porch, great, but unless he informs me of the fact, I remain ignorant of the real atheists. I remain frightfully aware, however, of the apparently fake atheists, who seem to be those speaking for all the atheist organizations. Funny how that happens.

So you’ll forgive me, I hope, while I take a look at American Atheists recent claim that Tim Tebow is “full of crap.” If you have a striking example of an atheistic statement made in the public sphere to counterbalance this bitterness, please share.

Of course the Tebow-hating isn’t anything new. There was a great situation a while back, when Bill Maher was all like: And I’m thinking: I’m homeschooling every single child that has the disaster of being mine, and when they turn out to make millions, I’ll be well taken care of, and Bill Maher — in all likelihood — will be dead.

But back to the point. American Atheists main-man, David Silverman, says that Tebow’s repeated references to God in his post-game comments is “bad for football…(Religion) injects the divisive force into football.”

Oh yes, terrible for football David. The Broncos-Steelers game was the most watched Wild Card game ever. Football in its very nature must be suffering. Why? Because there has been a divisive force introduced into the game. As we all know, this is utterly unheard of. Football was all about getting along until that divisive Tebow came along, damn him. I can’t help but wonder if what Silverman is trying to say is that watching Tebow pray makes him uncomfortable. Which is fine, because Silverman taking the time to whine about that makes me uncomfortable. So everyone’s even.

Ah, but there are reasons! “It’s not that Tebow prays, it’s that he waits for the cameras to be on him to do it…He’s totally faking.”Totally, man.

Alright, I’m gonna go ahead and clear something up for Silverman, who I’m beginning to suspect has never seen a football game. The cameras are always on Tebow. This is because a) everyone loves him b) HE’S THE QUARTERBACK and c) the children of America are wearing his merch: 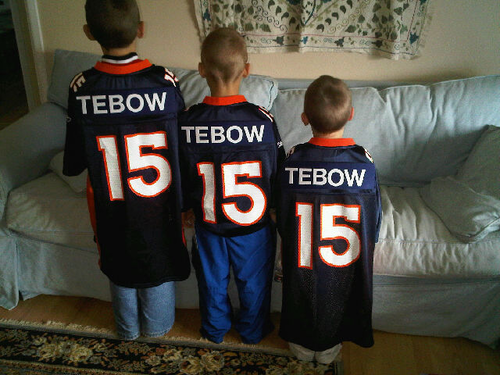 Oh yes. He’s poisoning the innocent ones. If the insinuation is that Tebow’s waiting “for the cameras to be on him” means that he only prays on television and never in private, then I applaud Silverman for his incredible Tim-stalking abilities. Otherwise I remain totally clueless as to how Silverman is sure that Tebow is “totally faking.”

But Silverman has Tebow’s crappiness on the highest authority. That’s right ladies and gentlemen, it’s time for your daily dose of Hey Look An Atheist Quotes Scripture!

As American Atheists make astonishingly clear, Tebow is not universally liked for his public prayer. He’s not being a hypocrite, he’s representing. And America is listening.

January 11, 2012 Back To Life
Recent Comments
0 | Leave a Comment
"I don’t know what bible your reading, but if you really think Jesus wanted his ..."
George In Defense of Covering Catholic Churches ..."
"1. Conflates a child's sense of wonder with religion.2. Untold thousands of children have been ..."
Lucius 3 Arguments Atheists Aren’t Allowed To ..."
"Brilliant and mind opener. You're hot! Jajaja"
agusq1970 Modesty Sets Fire
"Great quality content man, I am really impressed with this one. Thanks for sharing this ..."
diksha gupta Culturally Catholic, Baby.
Browse Our Archives
Related posts from Bad Catholic