The Authority of the Superhuman Truth

The Authority of the Superhuman Truth August 13, 2012 Marc

It seems that a good way to begin answering the question of what an abstract is is to establish our reaction to it. What is my reaction to fear? It makes my knees shake and my adrenal glands pump. What then, is my reaction to Truth? To give her a place of authority greater than our own.

If two men are arguing over whether a fetus is a human being, and the truth of the matter is presented to them in the form of a DNA sample, we would expect them to admit the primacy of Truth. We would expect the both of them to succumb to her authority, for the argument to cease, desist, or at the very least to change course.

(Now for the man who doesn’t give a damn about any philosophy but that of common sense, this seems enough dirt to bury that high-school ideology known as Relativism, which holds that everyone has their own Truth, and that it varies from person to person. If that’s the truth about Truth, lolsauce, then our relationship to Truth — that of servant and master — is an oddity. Why would our natural response to Relative Truth be the feeling that not just I, but every man, should bow before its throne? And if we are simply mistaken in this experience, why do we have confidence in our experience of Relativism?)

Silliness aside, most of us could agree, in word or deed, with this zygote of a definition: Truth is an intangible Thing with authority over us. We could say, without fear of contradiction, that we treat Truth as superhuman, as both existing outside of humans (existing even if humans do not recognize it) and being greater than humans (having authority over us). 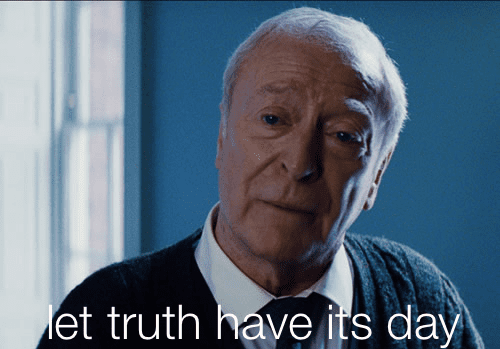 Now what often prevents Truth from having its day, as our dear Alfred would say, is the assumption that submission to her authority is a weakness — that it would be a loss and a failure to bow before Truth. (This is another quality of Truth worth adding to the definition, that when we do not have her, we fear her.)

Thus Internet Land is full of new and exciting methods of not bending the knee. My favorite Christian method is one I like to call the Jesus Appeal:

Person: As you can see, evolution negates the need for faith in Creation.

Christian: If you accepted Jesus Christ as your Lord and let Him into your heart, you’d see that it is not. But you won’t, so we cannot have a discussion.

Arguments will continue in this vein until we realize we’re all busy defending ourselves.

Now the following may seem paradoxical, but I believe we can all attest to this reality, that it is precisely when we admit our weakness before Truth that we are strong. What might be felt in the gut as a great failure, to stand before the crowd and say “I was wrong,” is actually the very act by which man becomes great. He has moved from a position of weakness — the defense of a lie — to a position of mighty strength, no matter how the world jeers. Admitting we were wrong is to put on the armor of Truth, having stood naked thinking we were clothed. Seen in this light, any feeling of failure is shown to be mere vanity and pride, for it is no weakness to obey the command of Truth — who, as we’ve established, has natural authority over us — any more than it is a weakness to leave an adulterer for your spouse.

Now my final point is this: our description of Truth treats Her as a Person. We “have Truth on our side.” To have Truth on our side does not simply indicate that we are right at a given instance, or even that we are always right. Having truth on our side implies having a relationship with Truth as one has a relationship with a person. She “fights for us”, and we for her. We speak of Truth acting independently of ourselves, of “winning,” “conquering,” and of “setting us free.” We speak of Truth as a person acted upon, as being ignored, slighted, or trusted. We speak of “seeking” and “pursuing” Truth, and in turn of Truth “finding” us. She is referred to as a “she” by the philosophers, and is forever finding herself represented as a beautiful woman in drama and fiction. Am I saying Truth is a person? Not quite. I’m simply pointing out that our natural response to Truth is anthropomorphize her — to treat her as such.

So: What is Truth?

August 12, 2012
So You Still Think Homosexuality Is Sinful?
Next Post

August 17, 2012 Dappled Things, My Dear Readers
Recent Comments
0 | Leave a Comment
Browse Our Archives
get the latest from
Catholic
Sign up for our newsletter
POPULAR AT PATHEOS Catholic
1