So You Still Think Homosexuality Is Sinful?

So You Still Think Homosexuality Is Sinful? August 12, 2012 Marc

So there’s a fantastic graphic being peddled around Facebook that’s making me laugh. Check it: 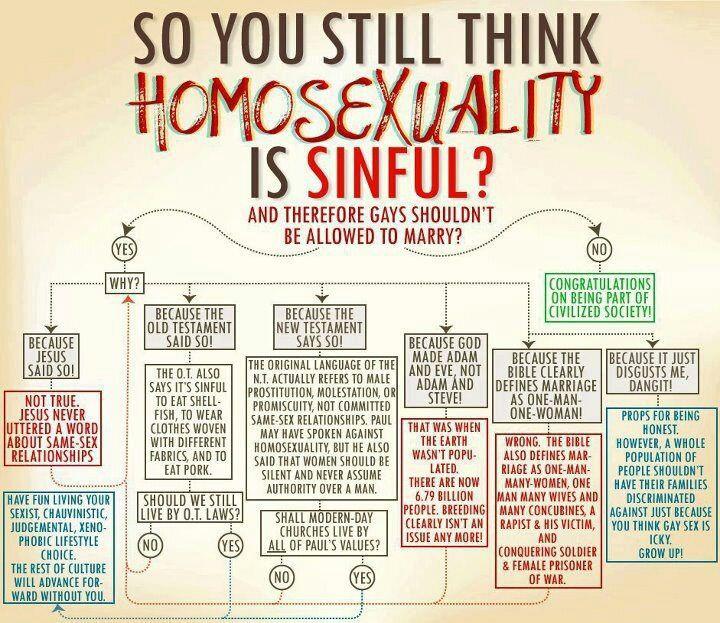 True. Nor did he utter a word about rape. Or genocide. Or running a crystal meth lab. Or suicide. Or pedophilia. To assume a man’s approval of everything he doesn’t mention is silliness to the highest degree.

2. “The original language of the N.T. actually refers to male prostitution, molestation, or promiscuity, not committed same-sex relationships.”

Well, I guess we can just look at the New Testament for this one:

“Claiming to be wise, they became fools; and they exchanged the glory of the immortal God for images resembling a mortal human being or birds or four-footed animals or reptiles. Therefore God gave them up in the lusts of their hearts to impurity, to the degrading of their bodies among themselves, because they exchanged the truth about God for a lie and worshiped and served the creature rather than the Creator, who is blessed forever! Amen. For this reason God gave them up to degrading passions. Their women exchanged natural intercourse for unnatural, and in the same way also the men, giving up natural intercourse with women, were consumed with passion for one another. Men committed shameless acts with men and received in their own persons the due penalty for their error.”

Now it’s true that Paul wasn’t speaking of the committed homosexual relationships we speak of today, primarily because the idea of a homosexual relationship would have made no sense to the Apostle. That a man is defined as a homosexual, heterosexual or bisexual is a modern concept. For the Ancient World, homosexuality was an act performed, not a life lived, and certainly not the summative feature of your being. The idea of two men proclaiming “We are homosexuals, and we are in a committed relationship,” would have been utterly foreign to Paul.

Unfortunately, Paul’s claims cannot be dismissed on that basis, as the Apostle makes abundantly clear that homosexual acts are contrary to the natural law. Not homosexuality, but homosexual acts: “Men committed shameless acts with men and received in their own persons the due penalty for their error.”

To explain what he’s talking about, we must understand his premise: Humans are meant to be happy. Good actions will ultimately make human beings happy, bad actions won’t. If an action is seen to be detrimental to the human person — that is, if it ultimately leads to unhappiness — then that action can be defined as contrary to our nature, and thus sinful.

This is what Paul refers to when he speaks of an act being “unnatural.” He does not use the modern sense of the word, which seems to define the “natural” as “that which has been observed to take place in the Jungle.” He uses the word “natural” in the philosophical sense, that which is aligned with human nature — that which makes humans happy.

(And to be clear, this idea takes for granted that many of the acts we spend our lives pretending make us happy do not. We might say that binge eating makes us happy, but ultimately it won’t — it brings pleasure, but it is detrimental to the human person. A man who sleeps around and must satisfy his every urge might say that he is “happy” with his life, but in reality he has made his “happiness” dependent upon having his urges satisfied. He is not happy in and of himself. So to the claim that drugs make us happy. They do not. They bring us pleasure, and they make our happiness dependent on them — again, we are not happy in and of ourselves.)

So when Paul says that men and women committed “unnatural” homosexual acts and “received in their own persons the due penalty for their error,” his claim is quite simple. The punishment for a wrong act is not God all up and smiting you from the sky. The punishment is naturally received within the human person. The homosexual act works against a human being’s natural end of happiness, and thus the human suffers for it. It’d be interesting to know if Paul was aware of what we are aware of today, that those performing homosexual acts are at greater risk for unhappiness, a risk that has not been directly associated with intolerance or hatred.

If what I say is true, that Paul is claiming that the homosexual act itself is contrary to the natural law, it does not seem reasonable claim to make, that he would have spoken differently were that act contained in a committed relationship.

But our graphic-maker covers his tracks on this one, by saying:

3. “Paul may have spoken against homosexuality, but he also said that women should be silent and never assume authority over a man.”

I would simply note the difference in quality with which these different words of Paul were made. In the former, which we have just discussed, Paul appears to be pointing out an act that is inherently detrimental to the human person. This is not something subject to change-over-time or an evolution of understanding or modern reinterpretation. In the latter, the author is referencing two different passages. The first is from Paul’s letter to the Ephesians:

“Submit to one another out of reverence for Christ.

Husbands, love your wives, just as Christ loved the church and gave himself up for her to make her holy, cleansing her by the washing with water through the word, and to present her to himself as a radiant church, without stain or wrinkle or any other blemish, but holy and blameless. In this same way, husbands ought to love their wives as their own bodies. He who loves his wife loves himself. After all, no one ever hated their own body, but they feed and care for their body, just as Christ does the church— for we are members of his body. “For this reason a man will leave his father and mother and be united to his wife, and the two will become one flesh.” This is a profound mystery—but I am talking about Christ and the church. However, each one of you also must love his wife as he loves himself, and the wife must respect her husband.

What Paul is saying is clear: Wives submit to your husbands, husbands offer up your life and die for your wives, as Christ did for the Church. I understand that this rings harsh and alien in the secular ear — that authority within a marriage is not a 50/50 split, but the meeting of two distinct, gender-specific, and equally difficult duties — but I cannot apologize for it, other than to say that the secular world is wrong about marriage.

As to women remaining silent:

Women should remain silent in the churches. They are not allowed to speak, but must be in submission, as the law says.

This passage is subject to change over time, as it is contained within Paul’s instruction on public worship which similarly — though not in substance — changed over time. This might be a problem to the Literalist Christian, but not to the Catholic, who with Pope Benedict can assert that the Paul’s passage must “be relativized.” Again, this is not the case with Paul’s assertion that homosexual acts are inherently detrimental to the human person.

4. “The Bible defines marriage as One Man Many Women, One Man Many Wives and Concubines, A Rapist and His Victim, and a Conquering Solider and a Female Prisoner of War.”

This is a prime example of the secular mind putting way more faith and trust in the Bible than the Christian is ever called to. The Bible is a library of history, storytelling, poetry, letters, and biographies: Something appearing in the Bible does not indicate that God endorses that practice. The only practices endorsed by God are — wait for it — those which we are told are endorsed by God.

More importantly, we need to look at the context. The Old Testament is fulfilled by the New. From Matthew 19:

Some Pharisees came to him to test him. They asked, “Is it lawful for a man to divorce his wife for any and every reason?” “Haven’t you read,” he replied, “that at the beginning the Creator ‘made them male and female,’ and said, ‘For this reason a man will leave his father and mother and be united to his wife, and the two will become one flesh’? So they are no longer two, but one flesh. Therefore what God has joined together, let no one separate.”

“Why then,” they asked, “did Moses command that a man give his wife a certificate of divorce and send her away?”

Jesus replied, “Moses permitted you to divorce your wives because your hearts were hard. But it was not this way from the beginning.”

Jesus says that it is for the very reason of maleness and femaleness that “the two will become one flesh.” He then says that the marriage rites established by Moses — which include divorce, polygamy, concubinage, etc. — were not condoned by God, but allowed for a time because of the hardness of their hearts, a time that Christ announces is over. Welcome to now. To ignore this and imply that because all sorts of immoral craziness happens in the Old Testament gay marriage should be considered a-ok, well, it’s a stretch.

Alright, those are the main ones. Now allow me to mention the real problem.

No one is claiming that because homosexuality is sinful, homosexual marriage shouldn’t exist. If marriage was an institution designated for the sinless there wouldn’t be marriages at all, for we have all sinned and fallen short. This graphic exemplifies a terrifying insistence within this “debate” — to argue on the most idiotic level possible. Ignoring the question of whether marriage is a definite Thing with a raison d’etre or a blank for us to fill, we waste our time with Scripture we don’t bother to understand, brushing the world and our intellects with varying shades of stupid.

August 11, 2012
The Furious Prophecy of Titus Andronicus
Next Post

August 13, 2012 The Authority of the Superhuman Truth
Recent Comments
2 Comments | Leave a Comment
Browse Our Archives
get the latest from
Catholic
Sign up for our newsletter
POPULAR AT PATHEOS Catholic
1