Catholic Hospital Claims Fetus is not a Person!

The Huffington Post asked me to join them in a discussion about the now famous lawsuit against St. Thomas More Hospital in Colorado, a situation which has spawned a breed of headlines gleefully shouting “Catholic Hospital Claims Fetus Is Not a Person”! On the off-chance you’re as shaky on the details as I was, have a description from the Huffsters:

Lori Stodghill was 31-one years old, seven-months pregnant with twin boys and feeling sick when she arrived at St. Thomas More hospital in Cañon City on New Year’s Day 2006. She was vomiting and short of breath and she passed out as she was being wheeled into an examination room. Medical staff tried to resuscitate her but, as became clear only later, a main artery feeding her lungs was clogged and the clog led to a massive heart attack. Stodghill’s obstetrician, Dr. Pelham Staples, who also happened to be the obstetrician on call for emergencies that night, never answered a page. His patient died at the hospital less than an hour after she arrived and her twins died in her womb.

In the aftermath of the tragedy, Stodghill’s husband Jeremy, a prison guard, filed a wrongful-death lawsuit on behalf of himself and the couple’s then-two-year-old daughter Elizabeth. Staples should have made it to the hospital, his lawyers argued, or at least instructed the frantic emergency room staff to perform a caesarian-section. The procedure likely would not have saved the mother, a testifying expert said, but it may have saved the twins.

In that brief, evanescent moment before we ignore human tragedy and begin to work the opinion-piece machine, let us pray for the perpetual rest of the souls now departed, and the comfort of those who await reunion with them in Eternity.

Now the hospital, in response to the lawsuit, argued that “Colorado state courts define ‘person’ under the [Wrongful Death] Act to include only those born alive. Therefore Plaintiffs cannot maintain wrongful death claims based on two unborn fetuses.”

This appeal to law was restructured by the headlines to accuse Catholics of hypocrisy. It was an easy slight of hand: The Catholic Church holds the philosophical and scientific certainty that the fetus is a human person, and look, here are Catholics arguing that the fetus is not.

Reality makes bad headlines. “Catholic Hospital Argues that the State of Colorado Claims that the Fetus is not a Person” just doesn’t have the same ring.

But it’s true. Suing in a civil court of law is an appeal to civil law, and the law of Colorado is clear: Unborn children have no right to life. It is the duty of a lawyer to interpret and apply the law, and they did precisely that.

What the cries of “hypocrisy” implicitly suggest is that St. Thomas More Catholic Hospital should ignore the law of Colorado and instead impose their deeply-held beliefs, that the fetus is, in fact, a person. In this view, Catholics are to rise above the law and practice a self-effacing form of civil disobedience. Quite a turnaround from the rhetoric surrounding the HHS mandate, which would grind the Catholic face in the dirt, demanding we violate our consciences before daring to ignore the law.

It seems the only guiding principle of our culture’s view on the relationship between the Catholic and the law of his country is that the law should always work against the Catholic.

Now to the important question. Did the hospital violate Church teaching?

Having said this, they did appeal to an unjust law. If they did this as a method of avoiding the justice due to the bereaved for pure financial gain, then yes, they are guilty, not of hypocrisy, but of refusing to practice an excellent form of Catholic civil disobedience (and of plain, stupid, sin). I agree with what the haters accidentally advocate: The Catholic should rise above civil law and administer justice where it is absent, giving to God what belongs to God and Caesar the middle finger.

But I am unsure on the issue. For all this being said, it is certainly the duty of a lawyer to use the law to avoid unnecessary damages to his or her client by way of the law, which means that the morality of their appeal to an unjust law — which again, does not imply assent to the truth of said law — could depend on whether or not the plaintiff’s case is a just one, a fact unknown to us now.

In short, since I do not know the motives of those involved in the legal defense of the Catholic Hospital, nor the validity of the plaintiff’s case, I cannot judge the morality of the lawyers’ performing their duty and appealing to the state law, nor of their client, and must wait, as the Bishops are waiting, for further investigation.

But whether they intend to or not, St. Thomas More Hospital is making one of the strongest pro-life arguments in the arsenal. By 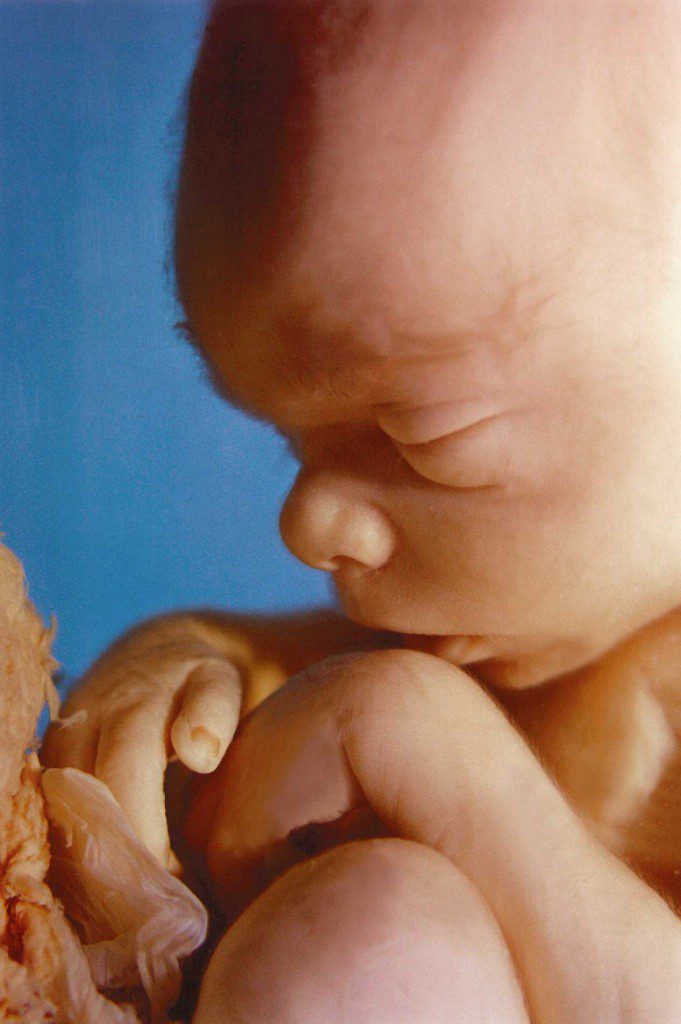 appealing to a dehumanizing state law they point out the utter absurdity of our laws regarding unborn life in this country, which hold that it is simultaneously legal and illegal to kill an unborn child.

The drunk driver who kills a pregnant woman is charged with two counts of homicide. The abortionist is charged with none. Thus the inalienable right to life is made alien, granted to a human not by virtue of his being human, but by virtue of parental consent. Human life is a blank box to be checked or unchecked on the whim of its mother. It does not exist apart from her desire for it.

This is, of course, ridiculous. It is not the desire for a child’s continued existence that gives him the DNA of a homo sapien, the characteristics of life and the potency of a fully-developed person. These are facts.

(And it’s not the pro-life movement pointing out this absurdity. Pro-choice groups like National Advocates for Pregnant Women argue against this schizophrenic treatment of pregnancy from the opposite angle, advocating the ban of all fetal homicide laws, all laws that would prosecute pregnant drug-users or alcoholics for endagering their child.)

So have my underlying difficulty with the way this case has been presented. Call it a critique of the bad poetry behind the news articles, a cry of “BS!” to the indignation expressed across the web. We’ve made it our mantra and our law that life in the womb is not worthy of human respect, and now we dare to express indignation over the fact that a father is potentially denied justice over the death of his unborn children, children we’ve only for a moment stopped calling zygotes, cellular blobs and fetal tissue. The contradictory laws this case reveals are merely the reflection of contradictory hearts. Either the fetus is a joke, the actions of the hospital sensible and the grieving of the father a bit ridiculous (for who cries over the loss of a parasite?), or the fetus is a person, and the Catholics should be held to the fire. We can’t have it both ways.

February 1, 2013 Life is Probably a Gift
Recent Comments
0 | Leave a Comment
"All political art is lame?"
George Arnold Ghosts With Erections
"I don’t know what bible your reading, but if you really think Jesus wanted his ..."
George In Defense of Covering Catholic Churches ..."
"1. Conflates a child's sense of wonder with religion.2. Untold thousands of children have been ..."
Lucius 3 Arguments Atheists Aren’t Allowed To ..."
"Brilliant and mind opener. You're hot! Jajaja"
agusq1970 Modesty Sets Fire
Browse Our Archives
Related posts from Bad Catholic