The disgrace of papal blessing for Ugandan homophobia

Oh, how she will be opposed! She’ll have to wade through thousands upon thousands of thought-out responses articulating the reality of the Church’s teachings on homosexuality and the political role of the Roman Pontiff to find the one, lonely piece of agreement claiming that “Pope is pedophile catholic church most oppressive institution ON THE PLANET. Can’t believe people still believe dogmas #fightthepower”

Here’s the issue Filipovic takes with my dear old bishop. There is in Uganda a massive and terrifyingly legalistic movement to make homosexuality punishable by life imprisonment and death. Rebecca Kadaga is a politician in favor of the “Uganda Anti-Homosexuality Bill” — proposed legislation that would do just that. This is an inexcusable sin, and has been spoken against by Kadaga’s archbishop. It is a crime that flies in the face of the Church’s teaching on homosexuality, which is held so innately in the minds of everyone reading gender articles on the Internet that Filipovic saw no need to mention it:

It is deplorable that homosexual persons have been and are the object of violent malice in speech or in action. Such treatment deserves condemnation from the Church’s pastors wherever it occurs. It reveals a kind of disregard for others which endangers the most fundamental principles of a healthy society. The intrinsic dignity of each person must always be respected in word, in action and in law. (LETTER TO THE BISHOPS OF THE CATHOLIC CHURCH ON THE PASTORAL CARE OF HOMOSEXUAL PERSONS)

Of course, Church teaching on homosexuality is in the bizarre habit of using verbs besides “Hate!” and thus remains widely incomprehensible to minds forced through our culture-war meat-grinder that renders all disagreement the total deprecation and rejection of the human person. Similarly, the position spewed by Rebecca Kadaga is in direct and awful contradiction to the Catholic Church’s teaching on the death penalty, which our author, again, neglects to mention:

If, however, non-lethal means are sufficient to defend and protect people’s safety from the aggressor, authority will limit itself to such means, as these are more in keeping with the concrete conditions of the common good and are more in conformity to the dignity of the human person.

Today, in fact, as a consequence of the possibilities which the state has for effectively preventing crime, by rendering one who has committed an offense incapable of doing harm – without definitely taking away from him the possibility of redeeming himself – the cases in which the execution of the offender is an absolute necessity “are very rare, if not practically non-existent.” (Catechism of the Catholic Church 2267)

(As a brief aside, one wishes that the enemies of the Catholic Church — may they live long and cease resisting grace — would realize that we’ve written down every damn thing we believe, and it’s all available online. (I assume, however, that it’s easier to write about what you just know deep in your heart the Catholic Church teaches.))

Now if this is the case, and the Church — by virtue of her teachings — is diametrically opposed to the policies of Kadaga, how on Earth could Pope Benedict do something so bad-bad-evil-bad as greet and bless her? I began doing some research on this hideous phenomenon, and I found a vast, scarcely-concealed conspiracy. You thought the Pope blessing Kadaga was bad? Here he is meeting with a a man diametrically opposed to the Church’s teachings on human rights, a known abusive dictator! 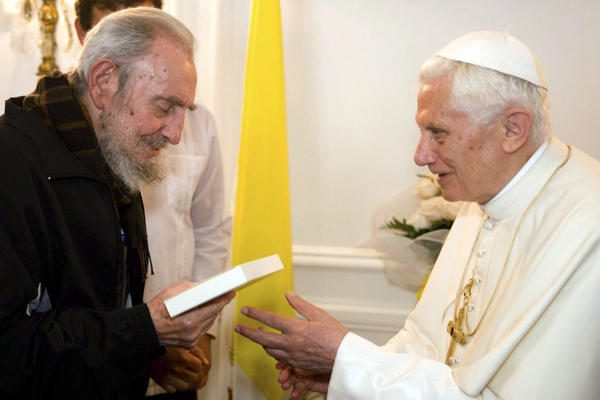 And with those who diametrically oppose the Church’s teaching on the value of human life! 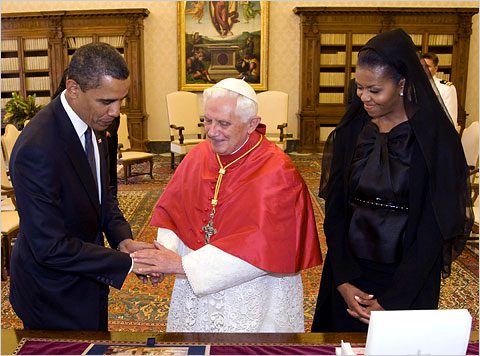 He even meets with those who have professed that Heaven is a fairy-tale for people afraid of the dark! 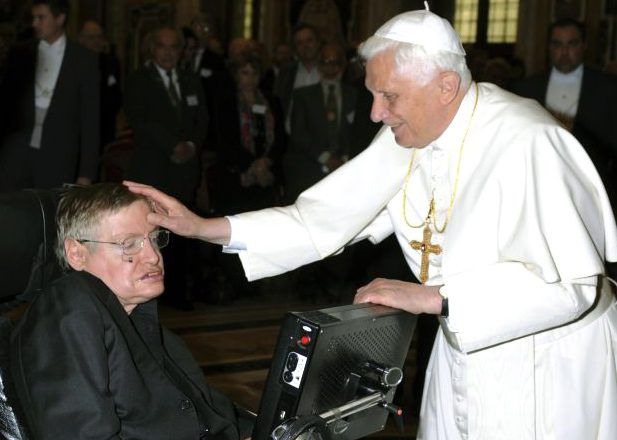 Apparently Pope Benedict is unaware of the truth Filipovic has been so happily endowed with, that blessings and greetings are only for people who are known to be morally sound, and in agreement with the teachings of the Church. To her horror, he meets and blesses people quite carelessly. It’s as if he’s taking a leaf out of the book of that Rabbi no one likes:

Then it happened that as Jesus was reclining at the table in the house, behold, many tax collectors and sinners came and were dining with Jesus and His disciples. When the Pharisees saw this, they said to His disciples, “Why is your Teacher eating with the tax collectors and sinners?” But when Jesus heard this, He said, “It is not those who are healthy who need a physician, but those who are sick. (Matthew 9:10)

Who the hell is in greater need of a blessing than a woman considering defying the teachings of the Catholic Church and risking the salvation of her eternal soul by allowing evil to reign in her country? And yet it doesn’t even appear that there was a blessing.

Rebecca Kadaga was one of thousands filtering by the Pope for a greeting, and according to the Vatican, “relations with the delegation were not outside the normal framework and there was no blessing…The group of Ugandan delegates greeted the Pope, as did many other persons who attended the audience with the Pope, which in no case is a specific sign of approval of the actions or proposals of Ms. Kadaga…”

So why has it been so suddenly necessary to frame a meeting — one that no Pope following the example of Christ would refuse — as a great commission from the Vatican to go forth and kill the gays? Though I wish it was otherwise, it appears that our author is not primarily concerned with the potential persecution of the gay people of Uganda. The Pope, by not refusing anyone, has given her an opportunity to uncork from her lungs every criticism of the Catholic Church that has fermented in the same, routine fashion for the past 60 years — and ultimately for the past 2000. The truth of the matter is cleverly ignored, and the appearance of the thing has served as an allowance to babble that all-encompassing bitternes which renders essays long, awkward, and pre-disposed to containing lies.

The Pope’s “track record on men who sodomize children isn’t exactly stellar”, “the early anti-sex crusades were focused on women – and haven’t let up. Women were ordered to serve their husbands and were barred from the priesthood.” “Desperate for a way to show its power and control followers, the Vatican decided that it was wrong to use anything other than crossed fingers to control the number and spacing of your children.” (Fertility awareness is effective as the Pill, do your damn research.) “The Church also took a stand against abortion again, and declared that abortion couldn’t even be had in the case of an ectopic pregnancy where the fertilized egg will never develop into a fetus.” (Even Wikipedia knows this is stupid).

Reality is manipulated to serve as an effective soapbox to unleash the courageous yodel that the Catholic Church should cease being the Catholic Church, that it should align itself with the views expressed in — what will surely be a philosophical cornerstone to rival the contribution the Church has made to Western civilization — On Gender and Other Agendas.

To close then: Even if the Pope’s actions were somehow worthy of reproach, you cannot, as Jill Filipovic demands, modernize a dogma. A dogma of the Catholic Church is a dogma and not an opinion precisely because it cannot be modernized. It is immutable, and while all other things mankind have held to be true are subject to that entropy exerted by modernization for the sake of modernization — while all bold statements must bow constantly to the weighty force of pop philosophy — these stand alone, true for all people for all time, revealed by God and proclaimed by His Church. This is the issue with learning about the Catholic Church on About.com and then attempting to offer it constructive criticism. We are trafficking in words, the meaning of which have been demolished.

December 28, 2012
Why Are Catholics Still Whining About the HHS Mandate?
Next Post

January 2, 2013 Why The Catholic Priesthood Is Composed of Dudes
Recent Comments
0 | Leave a Comment
"I don’t know what bible your reading, but if you really think Jesus wanted his ..."
George In Defense of Covering Catholic Churches ..."
"1. Conflates a child's sense of wonder with religion.2. Untold thousands of children have been ..."
Lucius 3 Arguments Atheists Aren’t Allowed To ..."
"Brilliant and mind opener. You're hot! Jajaja"
agusq1970 Modesty Sets Fire
"Great quality content man, I am really impressed with this one. Thanks for sharing this ..."
diksha gupta Culturally Catholic, Baby.
Browse Our Archives
Related posts from Bad Catholic