What Pope Emeritus Benedict XVI said is true, and damn true: “The Catechism was not written to please you. It will not make life easy for you, because it demands of you a new life.” Its teaching on modesty is so explosive that, would we believe and actualize it, we would convert. But I suspect we prefer monotony to metanoia, commentary to action, and porn to everything else. We’ll enthusiastically “note” the demands of the universal Church as “interesting,” and immediately — go back to sleep. (Were I made responsible for carving the tombstone for our age! I would put neither name nor date, only the words, “The more we spoke, the less we did, till we spoke about everything and did nothing at all.”)

Believe it or not, I’m not being flippant. This fact, that our age seems characterized by a lack of action, has been with me for a while, and the Church’s teaching on modesty has stirred the coals back into flames.

It began with a difficulty. Why on earth would she choose to say, in the Catechism which is the compendium of her teachings, that “modesty inspires a way of life which makes it possible to resist the allurements of fashion and the pressures of prevailing ideologies”? (CCC 2523) Shouldn’t she have said “the allurements of sinful fashions,” “over-sexualized fashions,” or something of the sort? After all, not all fashions are immodest. Crocs, for instance, actually function to maintain the virginity of their owner. But no, the Church says that modesty resists “fashions,” plain and simple.

Now we know that modesty is not, primarily, about reducing the incidence of lust. Modesty is wholeness; integration; a harmony between body and soul; the outward revelation of our inward subjectivity through the presentation and action of the body, in which we express to the world the inexpressible fact of our personality, and by which we have the faith necessary to believe in the subjectivity and personality of every human on the planet — from the enemy, to the face in the crowd, to the uniformed fast-food worker who leans out the window to exchange our money for fries. Modesty preserves subjectivity. Because of this, I believe that modesty empowers us to act, and with the ability to act comes the ability and the impetus to resist the allurements of fashion. Follow me here:

Passivity is the province of objects.

Any object can be acted upon. A rock can be thrown. A body of water can be blown into waves. A billboard of a naked woman 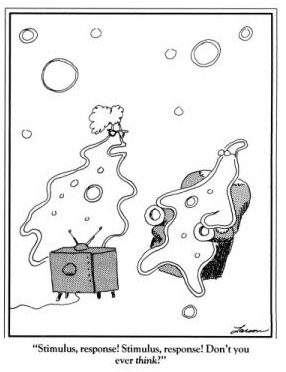 selling us tires can be set on fire.  Even animal “action” can always be described as a “reaction” to the environment, the reception of change from some other object.

This is essentially what we mean when we say that the dog “acts on instinct.” It does not freely choose to turn his head and bark, its turning and barking is caused by something else — the wave of food, or the noise of tires on the gravel. (Thus pornography, though its glare focuses on the reduction of the female body into a purely erection-inducing object, also objectifies the male viewer. He is animalized, and in this animalization he becomes an object acted upon, an animal responding to environmental stimuli, as removed from true, human freedom as a dog salivating at the sight of meat.)

Action is the province of subjects.

The only being in the Cosmos we experience as not merely being acted upon, but also having the capacity to freely act, is the human subject, namely, our selves. You.

Sure, we generally believe that when our neighbor sits on his porch, he chose to do so as a free, self-determined action, but this is an act of faith. We only experience action as freely acted and self-determined when we our selves are its author. So — ignoring for the time the massive free-will debate that rages underneath my simplification — have my dogma: Action emanates from subjects, not objects.

“Madness is rare in individuals—but in groups, parties, nations, and ages it is the rule,” says Nietzsche. If a group of people cease thinking of themselves as individual, human subjects, and begin to think of themselves as mere objects and parts of a whole, they become a crowd, a mob — a group easily acted upon. The words we use to describe the crowd express this fact — the crowd is riled, stirred up, moved, enraged, passively receiving the acting force of another. It is easier to convince a crowd of people to vote for an economic plan or to lynch an enemy than to convince your neighbor to do the same, for the crowd, insofar as they are an objectified mass, are easy to move. Any object can be acted upon. Call it Dionysian, call it mob psychology, call it what you like: The less we see ourselves as selves and subjects, the greater our capacity to be acted upon.

Fashion is passion, for passion, according to Aristotle, is the reception of change from another. Fashion is not something we do. Fashion is done to us. It is manufactured by an elite who view unique, human subjects as objects — as trends, demands, markets, and target populations — and sell their products accordingly.

We did not willfully decide to buy every Apple product ever made. We were advertised to, moved to, and persuaded to through envy.  We did not willfully decide to listen to Ke$ha, as we do not willfully choose the vast majority of what is nevertheless referred to as “popular music.” Popular music is marketed, produced, and advertised to be enjoyed on the most shallow level possible. It is sold like candy and immediately forgotten, preparing an objectified “audience” to purchase the next “big hit,” just as products are made to break, so we’ll purchase a replacement or — better still — the newest edition. We did not willfully elect our president. Our president is a fashion, as are most politicians. They spend billions of dollars to prostitute themselves to us, to move us, to sooth our fears and impose their image in our minds. (This is not to say there is utterly no free action involved in fashion, merely that it is greatly reduced.)

Indeed, it is the mark of fashion that it is always self-aware of having nothing to do with human subjects, and everything to do with acting upon objects — upon crowds that can be moved. Thus the slogans and the styles of fashion seek to compensate for being devoid of free, self-determined choice by creating an illusion of action — “The Power to be your best,” “Have it your way,” “Just do it,” “Because you’re worth it,” “Live in your world, play in ours” — forever affirming that yes, it was you who freely chose to buy that iPad. But when freedom and nonconformity have simply been shaped into another method of furthering allegiance to international corporations, it does grow a bit stale. 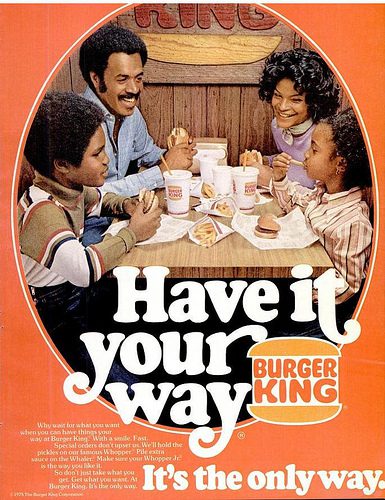 So the Church is absolutely correct to say that “modesty inspires a way of life which makes it possible to resist the allurements of fashion and the pressures of prevailing ideologies,” (CCC 2523) because modesty, “born with the awakening consciousness of being a subject,” (CCC 2524) is a way in which we live our lives as subjects, not objects, beings with the capacity to act in freedom and do what we want, not beings who are acted upon and moved to do what others want. Modesty is a way in which we, by our outward, bodily expressions, honestly act as the subjects we are, and thus it will always elevate us to the sublime status of the child throwing a rock — never to the rock being thrown.

The modest resist fashion, because the modest move themselves. The modest man resists and transcends the ideological fads that sweep, move and act upon entire nations because he is, in his treasured subjectivity, infinitely larger than the entirety of nations. 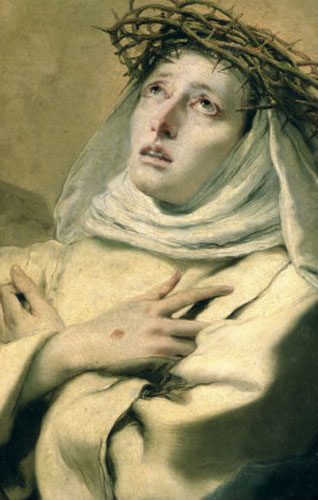 He — the fiery source of doing in the Cosmos — is the sweeper, the mover, and the arsonist, while nations remain the swept, the moved, and the burnt; paralyzed, immobile thought-concepts; the grouping together of objectified selves into population numbers and borders. How perfect St. Catherine of Siena’s phrase — “Be who God meant you to be and you will set the world on fire” — and how deep it illuminates the cavernous dark!  God wants us to be ourselves, to enter into the fullness of our own subjectivity. Only the human subject can obey the Messianic command to set the world on fire, because only the subject has the ability to freely light a flame. Only he who lives and acts as he is — a subject — will have the immense power granted to human subjects — to act, and this is modesty.

Immodesty, then, is conformity. Immodesty is the surrender of the subject to the ease of objectivity, a loosening of grip, a relinquishing of fire in favor of being burnt. Whether in dress, speech, movement, or thought, immodesty willfully presents the human subject as what it is not — an object — and thereby diminishes our capacity to act. Immodesty begs for fashion and fad to replace the thorny human spirit, who always stands alone before Eternity, with a spirit of the times. I used to think being a Christian made me a sheep, but it occurs to me now that the virtue of modesty — and of chastity to which it is ordered — is the revolution against passivity, and will prepare my arms for battle, to burn down and build up what I will.

June 12, 2013 Why I Can't Conceive of De-conversion
Recent Comments
0 | Leave a Comment
Browse Our Archives
Related posts from Bad Catholic