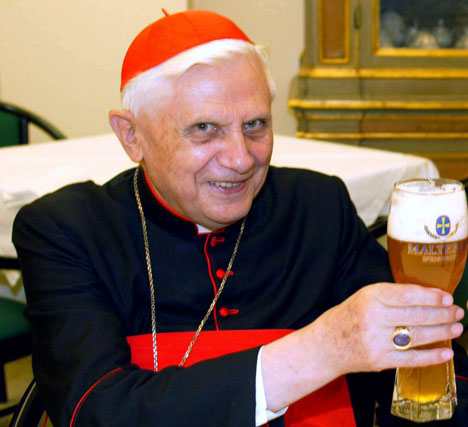 The idea of Europe has fallen into a strange twilight today…Boundaries appear once again in their immovable significance; the antithetical character of nationalism could become stronger than the European fellowship that has scarcely begun to grow. It must be demonstrated anew whether Europe is only an idea or a real power for reconciliation. (Europe – Hopes and Dangers, 1990)

Pope Emeritus Benedict XVI predicted the collapse of the European Union. I do not mean that he declared it grandly (or even authoritatively). Rather, through his books, articles, and quite a few sermons, he delivered a general syllogism:

I. Any unity rooted in mere economic interest is a precarious one.

II. The EU is a fundamentally monetary union (without the roots required to sustain genuine human community).

III. The EU is precarious.

As the world reels and celebrates over the grand British departure from the European Union, a moment of reflection on this enduring warning seems in order.

Europe, and, by extension, the Western world, has only ever come close to unity by virtue of a common creed. In Europe: Today and Tomorrow, Benedict roots the idea of Europe in the Christianized Roman Empire which, “in connection with the book of Daniel, the Roman Empire–renewed and transformed by the Christian faith–was considered to be the final and permanent kingdom in the history of the world.”

Despite this “New Rome” taking on unique forms in the East and West, “there were still sufficient unifying elements to make one continent of these two worlds: in the first place, their common heritage of the Bible and of the early Church…the same idea of empire, their basic understanding of the Church, and hence also the common fund of ideas concerning laws and legal instruments…[and] monasticism, which among the great movements of history had remained the essential guarantor not only of cultural continuity, but above all of fundamental religious and moral values, of man’s awareness of his ultimate destiny; and as a force prior and superior to political authority, it became the source of the rebirths that were necessary again and again.” (Europe: Its Spiritual Foundations, 2000)

A union without genuine cultural unity, shared mission, and a rooted sense of value will not penetrate to the lowest levels of the community as a felt phenomenon of familial relation. Both the arguments for and against the British exit — focused as they were on the relative economic benefits of remaining or leaving the European Union — showed that whoever won, Europe had already lost. A unity of self-interested nation-states is about as stable as a family of self-interested brothers and sisters. Without an ethical and spiritual unity, it is only a question of time before a person, a community, or a nation asks, “And what is this communion doing for me?” Again, Benedict noted this rather incisively: “Over the last fifty years, this [monetary] aspect of European unification has become ever more dominant, indeed, almost exclusively influential. The common European currency is the clearest expression of this in the work of European unification: Europe appears as an economic and monetary union, which as such participates in the formation of history and lays claim to a space of its own.” (Reflections on Europe, 2001)

The continued effort of the European Union to achieve unity through money and national self-interest has kept it far from Benedict’s healing advice: “Europe, as a political idea, must finally replace the model of the nation state with a generous concept of cultural fellowship, with a solidarity that embraces all of mankind.” (Europe: Its Spiritual Foundations, 2000)

Benedict’s basic thesis — that true unity depends on the pre-economic and even pre-political foundations of value, morality, mission, and creed — has a lesson for us ex-Europeans on the other side of the Atlantic. Populism, and even racist populism, is not simply the result of poverty or economic crisis. It is very often an evil reaction against a feigned togetherness. For while we seldom hate a person simply for their differences, we are very often tempted to hate a person when we are pushed together, told that we are neighbors and friends when there is no tangible bond of unity between us — some shared truth, history, or creed. This could never justify the anti-immigrant sentiments that strangle American politics (and, at least in the popular press, fueled Brexit) but it does go a long way towards explaining them. We are an over-sized nation claiming unity in transient third terms: a national economy, corporate franchises, vague patriotic stereotypes, and an increasingly homogeneous culture.

Genuine unity needs a genuine third term. For Benedict, this third term must be something beyond the political and the economic spheres, beyond even culture and race. For Benedict, the unity of man only attains its fullness in the religious sphere, precisely because the Creator of mankind is both eminently personal and eminently common to all men. Benedict does not advocate a homogeneous religious culture. Rather, he seems to believe that a common faith, or, at the very least, a common recognition of being a nation “founded in faith,” is the essential basis by which we are free to practice tolerance towards other religions, rather than submitting them to a reductive and violent secularism:

Unless we embrace our own heritage of the sacred, we will not only deny the identity of Europe. We will also fail in providing a service to others to which they are entitled. To the other cultures of the world, there is something deeply alien about the absolute secularism that is developing in the West. They are convinced that a world without God has no future. Multiculturalism itself thus demands that we return once again to ourselves. (Europe and Its Discontents, 2006)

The banishment of Christian roots does not reveal itself as the expression of a higher tolerance, which respects all cultures in the same way, not wishing to privilege any, but rather as the absolutizing of a pattern of thought and of life that are radically opposed, among other things, to the other historical cultures of humanity.

The real opposition that characterizes today’s world is not that between various religious cultures, but that between the radical emancipation of man from God, from the roots of life, on one hand, and from the great religious cultures on the other. If there were to be a clash of cultures, it would not be because of a clash of the great religions which have always struggled against one another, but which, in the end, have also always known how to live with one another but it will be because of the clash between this radical emancipation of man and the great historical cultures.

Thus, even the rejection of the reference to God, is not the expression of a tolerance that desires to protect the non-theistic religions and the dignity of atheists and agnostics, but rather the expression of a conscience that would like to see God cancelled definitively from the public life of humanity, and relegated to the subjective realm of residual cultures of the past.

Relativism, which is the starting point of all this, thus becomes a dogmatism which believes itself to be in possession of the definitive scope of reason, and with the right to regard all the rest only as a stage of humanity, in the end surmounted, and that can be appropriately relativized. In reality, this means that we have need of roots to survive, and that we must not lose sight of God, if we do not want human dignity to disappear. (Lecture, 2005)

Without a recognition (even a non-believing recognition) of Europe’s Christian roots, a genuine European unity will end in Brexit after Brexit, maintaining itself only “when the going is good” — a farce of fellowship that masks the monetary interest of its individual members. The situation is not so different in the United States. If we do not find some pre-political, pre-economic ground of our fellowship, we will perish as a nation. The old saying holds true: we either serve God or Mammon. To it, Benedict adds that we are only unified in God or in Mammon — and the latter is a shaky union indeed.

June 22, 2016
The Difference Between a Narrative and an Argument Part 2
Next Post

June 25, 2016 How To Get Your Human To Drop Morality
Recent Comments
0 | Leave a Comment
"All political art is lame?"
George Arnold Ghosts With Erections
"I don’t know what bible your reading, but if you really think Jesus wanted his ..."
George In Defense of Covering Catholic Churches ..."
"1. Conflates a child's sense of wonder with religion.2. Untold thousands of children have been ..."
Lucius 3 Arguments Atheists Aren’t Allowed To ..."
"Brilliant and mind opener. You're hot! Jajaja"
agusq1970 Modesty Sets Fire
Browse Our Archives
Related posts from Bad Catholic

Catholic
Benedict-hearts in the Age of Francis
Bad Catholic