A Series of Unfortunate Events…and Then, Raspberries

This morning, I went to go to the dentist. I’ve known that there has been something wrong with my teeth for a while, but since we’ve been bereft of dental insurance for quite a while I’ve put it off. When I finally got a new insurance plan in October that allowed me to sign up for dental, I jumped at the chance. But what with all that pesky new-baby-having and Thanksgiving hysteria and Christmas traveling, I’ve put off the actual moment of reckoning. Then last week one of my teeth, which had been hurting off and on for a few months, suddenly went into full-blown panic mode and shot pain all over the left side of my mouth and up into my jaw. So I bit the bullet (figuratively, since I wasn’t biting anything in reality) and made an appointment.

Most fortuitously my primary care doctor prescribed a ludicrous amount of pain medication for me when I broke my toe, so I didn’t have to suffer too much until my appointment. And this morning it was with many prayers for an inexpensive, easily-solved problem that I took off to see a brand-new dentist.

Ominous signals went up before I even left my house. I got a phone call as I was gathering insurance cards and random paperwork. The dentist’s office was calling because they couldn’t figure out my benefits and my insurance company refused to tell them what was covered and what wasn’t.  That’s weird, I thought to myself. And annoying. “”But not to worry”, the receptionist assured me. “Just bring in a copy of your benefits guide and we’ll figure it out.”

Luckily the Ogre and I have been cleaning out and re-organizing our black hole of a study, so the benefits guide was actually out in plain sight. I grabbed it and took off, with only a medium amount of trepidation in my thoughts.

I loved the office when I got there. The receptionist was friendly and the dentist was actually right there, in and out of the waiting area instead of shut up in the back. It was all very open and nice. Plus, one of the girls who works there had an adorable little toddler in tow, so I felt right at home.

Without telling me. Nowhere in anything I read or signed was this made public. Additionally, although we have been paying for this dental insurance for well over four months, their official records show that my coverage began January 1.

At this point I’m furious, but hopeful that whatever mutiny my teeth are mounting can be controlled for at least a few months.

So the doctor comes out to get me, introduces himself with a handshake (I’m always very impressed when doctors do this) and does a full set of X-rays. For which I had to take out my nose ring, much to  my chagrin.

Then he tells me that all the pain is coming from one tooth, a tooth which had a root canal done on it a few years ago. The filling has possibly cracked, but in any case the root canal is not holding up and there is an abcess at the base of the root. Which must be taken care of…within the next two weeks.

Additionally, the dentist recommended having the tooth pulled and replaced, a procedure that must be done by an oral surgeon and under sedation. He said it’s pretty much the same as having wisdom teeth removed, and I’ll require bed rest and many painkillers for at least a few days afterward.

This is all terrible news, as most of you can imagine. We can’t afford a cent of it, the Ogre is just starting a new semester, we’re already taking Liam in for his circumcision (also a full-anesthesia surgery) in a week, and we don’t have family around that can come over and lend a hand for a few days.

Then I came home and told the Ogre. I was stewing about it as I washed some raspberries for Sienna, who promptly stuck them all on her fingers and chased me around the house.

We were quickly joined by Charlotte, who squealed hysterically and raised her fingers in a pint-sized version of Sienna’s raspberry claws. And then I broke into song.

Seriously. This has never happened before, but I started singing mini-odes to my children to the tune of “Yankee Doodle” mixed with “Mary Had A Little Lamb.” I sang about Sienna and her raspberry hands, the way she wipes my tears away when I cry, and how she always wants to help no matter what the job is. I sang about Charlotte refusing to eat fruit but eating salsa by the spoonful, how she looks exactly like a bobblehead doll, and how she wouldn’t let me buy her a beanie baby from the clearance rack at CVS yesterday unless I got one for Sienna too. I sang about Liam and how cuddly he is, how he smiles all the time, even when he’s crying, how he’s the chubbiest thing I’ve ever seen, even down to his fat little fingers, and how he thinks his sisters are the funniest thing in the world.

I realized as I was singing that all these things that come with having lots of children are worth it. This is something I’ve known to be a truth with my mind for years, but I’ve never really felt it before. Today, I feel it. It’s hard to be broker than broke, to have no emergency cash stored up for things like a rotting tooth, to be flung into the desert with no family nearby and only the five of us to support each other. But if I could go back and change any of the decisions we’ve made that have led us here, I wouldn’t. I’d love to have more money, but I’d much rather be chased around the house by a raspberry-fingered five year old every morning. I’d love to have fashionable clothes and a fancy car, but I’d much rather have the company of a pint-sized salsa-glugging toddler. I’d love to live in a real house instead of an apartment, but I’d much rather have the world’s happiest and fattest baby cradled in my arms.

It would be nice if we could have material comforts and our children, but given the choice between the two, it’s no contest. And it won’t be a contest in the future, either. When we’re in a position to financially support another child, another child will be had. Even if it means that we live in an apartment forever and I spend the rest of my life giving the Ogre horrible hack-job haircuts. Because really 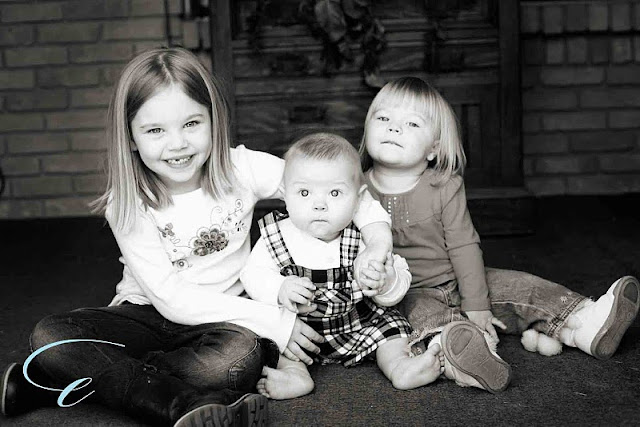