Well, I’m kinda hoping y’all didn’t hear me on Jennifer’s show yesterday, because I sounded like a dummy. In my defense, I feel like one too right now, so.

Nevertheless, it was nice to feel a little bit normal again, back in the world of bloggers for a bit. I  miss writing and interacting with all my far-flung internet friends. It sucks to be on these long, drawn-out creativity hiatuses because I feel like I’m bereft not only of a necessary outlet, but also of necessary social interaction.

I am, however, determined to get back to writing. Not because I feel like I miraculously have something interesting to say again, but because I’m beginning to suspect that the reason I think I have nothing to say is because I’m not writing. Sounds backward, right? But I’m wondering if, contrary to what I’ve always believed, it’s the habit of writing that sparks my creativity and gets me thinking, instead of the other way around.

After I wrote the post about not being able to drag myself to confession, one of my friends let me borrow a book. I wouldn’t even have been able to feign interest if it hadn’t been by Kathleen Norris, one of my favorite authors. As it was, it sat neglected on my dresser for a week before I picked it up, and even then I was motivated primarily by a sense of obligation.

Lo and behold, the book is amazing. It’s called Acedia & me, and I feel like it’s slowly, page by page, bringing me back to life.

There is something about current approaches to depression that bothers me. Not that the combination of medication and therapy doesn’t work, because it obviously works for many people and has done wonders to help me as well. But for me, it always feels a little incomplete. Like a bandaid instead of a cure, I guess. Usually adding regular, high-intensity exercise can bridge that gap, but with the exhaustion and strain of pregnancy that was not happening, this time around.

I’ve never doubted that there is a spiritual component to depression, at least for me. Often I find it easier to cast myself upon God’s mercy during bouts of depression, because it can be the only thing I’m capable of doing. But there have been times, like the past few months, when it just doesn’t seem to matter. “It” being the totality of existence, up to and including God.

That is always unnerving for me. In a detached way, I know that this state of affairs is wholly uncharacteristic and that I should be alarmed, maybe even frightened. But I can’t quite figure out how to care again. One of the reasons I like this book so much is the way she describes that apathy — not as the failure or inability to care, but as the rejection of time itself. “For I had become aware that it was possible to reject time, as well as embrace it. If I wanted to, I could live just barely, refusing the gift of each day. (Acedia & me, p. 12)”

A few years ago, I wrote about how I can measure the state of my mental and emotional health based on whether or not I’ve made the bed. In the first pages of Acedia & me, Kathleen Norris writes that her mother saw making the bed as a “meaningful act of hospitality to oneself.” This phrase immediately caught my attention. She goes on to explain that

One of the first symptoms of both acedia and depression is the inability to address the body’s basic daily needs. It is also a refusal of repetition. Showering, shampooing, brushing the teeth, taking a multi-vitamin, going for a daily walk, as unremarkable as they seem, are acts of self-respect. They enhance the ability to take pleasure in oneself, and in the world. But the notion of pleasure is alien to acedia, and one becomes weary thinking about doing anything at all. It is too much to ask, one decides, sinking back on the sofa. This indolence exacts a high price….It is a call to suicide.

In itself, this is not earth-shattering news to me. It’s very familiar ground, as the slow unraveling of daily hygiene and routine housework are like smoke signals for both me and the Ogre. We recognize them as signals of distress, tangible evidence that things are not okay, and over the years we’ve both gotten better at catching it early and running intervention before things fall spectacularly apart.

But what I am finding earth-shattering is the idea that returning to a routine, assenting again to the rhythm and repetition of my days, is not evidence that I’m feeling better. It’s the work I must do in order to feel better.

Granted, this is easier said than done. Depression, unlike acedia, is a paralysis of the will. There’s a true aspect of being unable to perform basic tasks inherent in clinical depression. But since that phase of paralysis has lifted a bit for me, I’m finding that returning to the repetition of daily tasks is helping keep it at bay. It’s even – dare I say it? – making me happy. The neatly made bed brings a smile to my face, and makes my sleep a little sweeter at night. Ending the day with a bath and a book, instead of mindlessly flipping on the TV, is quickly becoming another “meaningful act of hospitality” to myself. Acknowledging my body’s need for rest and relaxation, and then providing it, is a physical rejection of the insidious self-loathing depression lodges in my mind.

These little things are, in themselves, a kind of prayer. Although I still feel very far from God and prayer seems like a Sisyphean punishment, the assent of my will to the quotidian is like an offering to Him. Much like going to confession the other day, it’s a way of doing what I should even when I don’t want to. Last night, when I was tempted to leave the lunches for the Ogre to make, I gritted my teeth and made them instead. It was a small offering of love to my husband, and small act of obedience to God, in acknowledgement of my vocation. If nothing else, making lunches is a sign to myself that I am not rejecting time, nor the gift of the days. Lunches must be made, because my children need to eat, day in and day out. Even in the midst of blackest despair, I’ve never been too far gone to recognize the incredible gift of my children’s lives. But it’s the little things, the lunches and the laundry, that tie me to their days and remind me to be grateful for time – even when the repetition seems endless.

I didn’t say a rosary last night, or even a Hail Mary, but I think those lunches count as a prayer.

December 18, 2015 Conversations with the Ogre
Recent Comments
0 | Leave a Comment
"So what you're really saying is that you use NFP because you don't want to ..."
Naters The Super Suckage of NFP
"I'm sorry, but planning pregnancy involves using birth control. did you miss that memo?"
leesa maire All Parenthood is #UnplannedParenthood
"Without knowing that God has a purpose for everything, my sufferings in life would be ..."
Jim J. McCrea Sentimental Claptrap, Part V: God Has ..."
"Has the photo been changed? Because what's at the top right now is photo of ..."
Evelyn Sex Breasts and Babies
Browse Our Archives
get the latest from
Barefoot and Pregnant
Sign up for our newsletter
POPULAR AT PATHEOS Catholic
1 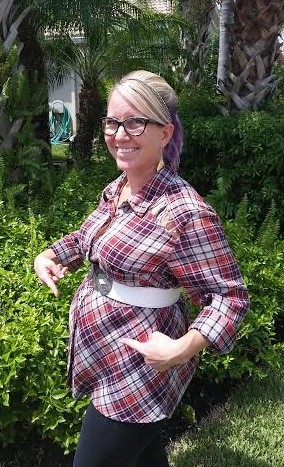